We wrap up the Louisiana schools before heading north toward Jonesboro. Confused? Don't miss the definitions and footnotes at the bottom.

When we released the Football Outsiders Almanac 2010 projections last summer, there were a few immediate outliers, and they all had something in common.  Texas Tech, Tennessee and Kansas were all projected strangely high ... and all three were entering their first seasons under a new regime.  (And we whiffed on all three.)  As the season approached, I tried to tackle the topic of coaching changes, and how we might be able to adjust projections, in Varsity Numbers.

At the non-BCS level, teams are picking from a different pool of candidates. How does the data shape up there?

One thing is certain: If you can stumble across a major-conference coach at this level, snatch him up. Unfortunately, it takes pretty crazy circumstances for that to happen. The only two coaches who went from a BCS conference to a non-BCS conference without getting fired for performance-related issues were George O'Leary at Central Florida (successful at Georgia Tech, hired by Notre Dame before it was revealed that he fudged his résumé) and Mike Price at UTEP (successful at Washington State, hired by Alabama, fired before his first game for questionable behavior). Because neither was removed from his job for matters pertaining to their coaching ability, they both were labeled BCS Conf. Coaches.

The problem with attempting to make projections based on the "type" of coach that was hired, of course, is that most coaches have diverse backgrounds.  I knew it at the time, but I didn't know a different way to attack the issue (without spending weeks on it, anyway).

The "type" issue comes vividly into play with the new coach of the Louisiana-Lafayette Ragin' Cajuns.  How exactly do you categorize new coach Mark Hudspeth's career to date?  In the last 11 years, he has gone from Delta State offensive coordinator, to Navy offensive coordinator, to highly successful head coach of DII North Alabama, to two-year wide receivers coach at Mississippi State.  Going the simplest route possible, he would show up under "College Assistant," but that doesn't really tell the tale.

Regardless, Hudspeth appears to be an absolutely tremendous hire for Ragin' University.  He went 44-8 in his last four years at North Alabama, and he seemed to play a pretty strong role in Mississippi State's recent offensive improvement.  He has extreme familiarity with the region and success in a number of different offensive roles.  But here's where I ask the same question I asked of UL-Monroe: what exactly is the ceiling here even if Hudspeth -- an enthusiastic dude, for what it's worth -- is the best coach in Ragin' Cajun history? 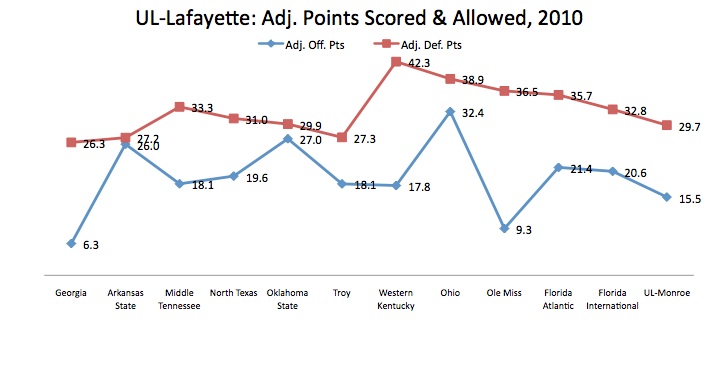 Of course, before going too overboard about how good a hire Hudspeth seems to be, we should point out that the last guy seemed like a pretty good hire too.  Rickey Bustle came to UL(L) after 23 years as an assistant coach, nine as offensive coordinator at either Virginia Tech (eight years) or South Carolina (one).  He had strong ties to the south (he also had stints at UL-Monroe, East Carolina and Gardner Webb ... plus a year as RBs coach for the USFL's Arizona Wranglers, which is awesome).  He stayed in Lafayette for nine seasons ... and could never break through the six-win ceiling.  The Cajuns tied for the Sun Belt title in 2005, but the quality was fading.

In 2010, UL(L) never once played well enough to beat a perfectly average team; they came close a couple of times, but with a poor defense and a worse offense, they earned that 0-12 Adj. Record.  The offense was all over the place, but an iffy defense got much worse when injuries set in.  See that sudden jump in Adj. Points allowed for the Western Kentucky game?  The Cajuns were without four starters, including two on the defensive line.  That'll do it. 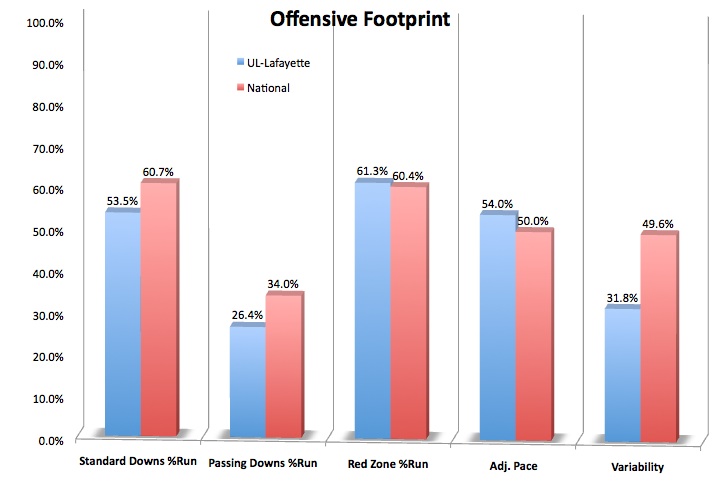 The transition from Bustle's pass-heavy personnel to what I assume will be a somewhat run-heavy Hudspeth offense could be interesting.  In Hudpseth's final year at North Alabama, the Lions ran 64% of the time.  Granted, with a +24/game scoring margin, a decent chunk of those runs were probably of the "we're up big in the second half" variety, but combine that with the fact that Mississippi State was one of the most run-happy teams in the country, and you start to see what Hudpseth's intentions might be.

That's great news for potential starting quarterback Blaine Gautier.  Gautier wasn't much of a passer last year (51% completion rate, 3 TD to 6 INT), but he could run (280 rushing yards, five touchdowns), and in the spring's first scrimmage, Gautier ripped off touchdown runs of 32 and 95 (!) yards.  Of course, he's got plenty of competition for the starting job.  After all, Chris Masson (1,842 yards, 53% completion rate, 11 TD to 6 INT) has started for a good portion of two seasons now, and Brad McGuire (561 yards, 55%, 3-to-3) has experience.  And that says nothing of Houston transfer (and former four-star recruit) Terrance Broadway, who had a stellar passing line (71%, 10.1 yards/pass, 3-to-1) with the Cougars last year but lost playing time due to sackandfumbleitis.  Hudspeth's got quite a few options here, but you have to wonder if Gautier's legs will help him out in the competition. 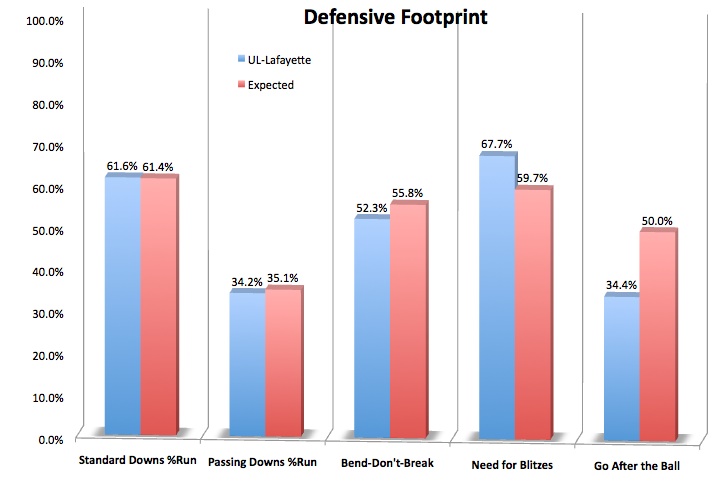 UL(L)'s defense was absolutely not the worst one in the country last year (they almost were on third downs, but I digress), but ... they didn't have much going for them either.  They were relatively efficient on passing downs (strange considering their iffy pass rush -- it appears they sent the house to get pressure), but the breakdowns they suffered in that regard more than made up for any good plays.

Is there any hope for improvement in 2011?  Perhaps.  Three of four starters return from a line that was decent against the run; six-foot-five end Emeke Onyenekwu (6.5 TFL/sacks) returns, as do Justin Anderson (3.5 as a redshirt freshman) and Tyrell Gaddies (3.0).  Overall, there is decent size on a line that has to be considered a relative strength.

If the line doesn't make a play?  Hard to say who will if it's not linebacker Devon Lewis-Buchanan (50.0 tackles, 6.0 TFL/sacks, 6 PBU).  UL(L)'s defensive improvement in 2011 might depend on the element of surprise, with a new set of coaches unleashing a new gameplan.

Of course, the element of surprise only lasts a couple of games, so...

In honor of Coach Bustle, how about a little "Leaving Louisiana in the Broad Daylight"?  Oak Ridge Boys, for the win!

God, I loved them when I was three.

It is rather difficult to be as decent as UL(L)'s defense was in terms of passing downs efficiency, yet as terrible as they were at allowing huge gains on passing downs.  The 41-spot difference between their Passing Downs Success Rate+ and Passing Downs PPP+ was one of the highest in the country.

Only one of those defenses was anything resembling good, so ... don't try this at home, I guess. 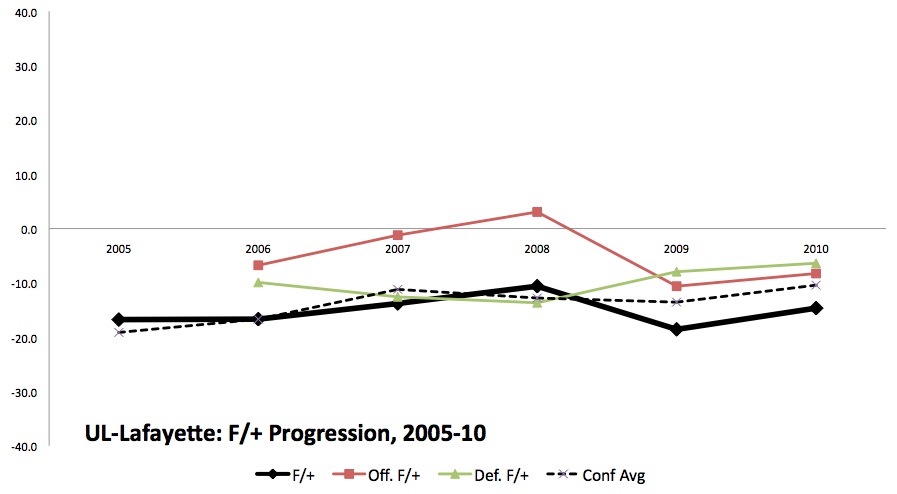 For much of Bustle's tenure, UL(L) was a league-average Sun Belt team, but they slipped the last couple of seasons.  The Ragin' Cajuns have the second-worst recruiting average in the country, and they only return ten starters.  It's almost a bad thing that so much of the talent Hudspeth inherits seems to come at the quarterback position, unless he is such an offensive innovator that he figures out how to play two quarterbacks simultaneously.  The winner of the quarterbacks derby should be a good one, though, and with a weapon like Green and a great offensive mind like Hudspeth, one has to assume the offense will improve.  But "improving" in this case just means recovering the team's status as an average Sun Belt team.  In other words, 2011 will likely be a baby steps year for Hudspeth and UL(L).