NOTE: Confused? Don't miss the definitions and footnotes at the bottom.  And here: play this in the background to get yourself in the mood for this one.

Memory is a funny thing.  Back in the 1980s, when men were men, haircuts were haircuts, and tearaway jerseys made tackling Herschel Walker hilariously impossible, we couldn't be quite as picky regarding what college football games we wanted to watch.  If there was one on, there probably weren't 17 others to choose from.  Thus, while I cannot remember probably half of the games I watched last season, I remember watching every second of the 1987 Independence Bowl between Washington and Tulane and rooting passionately for the Green Wave because a) I was a guilty liberal even early in life, putting my heart on the line for every underdog I could find, and b) Tulane's colors, logo, etc., were just so damn unique and cool.  I recall thinking something to the effect of, "An up-and-coming program in New Orleans? This team is going to be huge!"  Naturally, I was correct.  Fifty years too late.  (I also adopted the Pittsburgh Pirates ten years too late and the Miami Dolphins 15 years too late.  Does that make me an old soul?)

Alas, Tulane is now another lost 1930s power who, unlike Fordham, Minnesota or St. Mary's, actually still fields an FBS team.  Or they try to, anyway.  The undefeated season of 1998 was quite a while ago now, and though Bob Toledo is likable and hard-working ... the results just haven't been there. 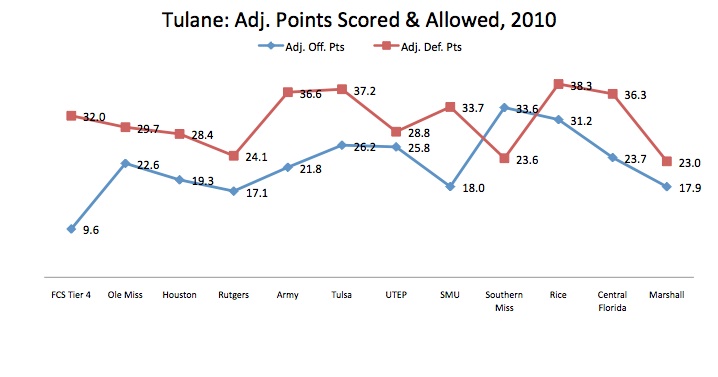 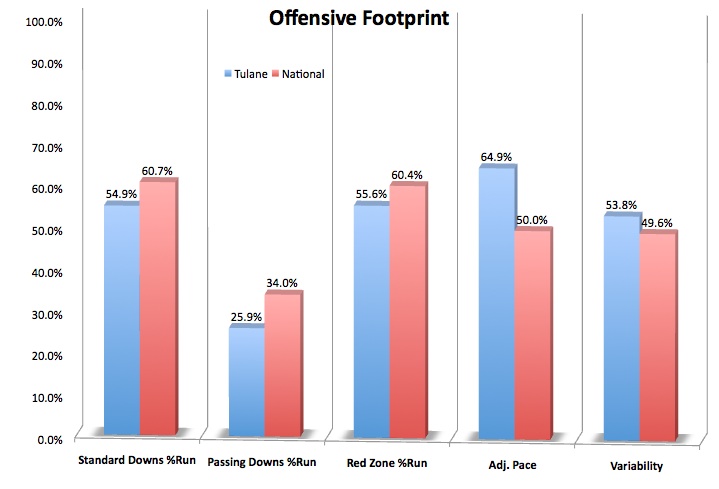 Say this much for the Texas and Louisiana mid-majors we've discussed so far: they produce running backs.  Bryce Beall at Houston.  Sam McGuffie and Jeremy Eddington at Rice.  Big Zach Line at SMU.  Joe Banyard at UTEP.  Lennon Creer at Louisiana Tech.  In the NFL, it is said that running back is one of the most replaceable positions on the field because, among other things, there are so many equally-talented guys.  Apparently the same could be said for mid-major college football in the mid-south.

For Tulane, it's the awesomely-named Orleans Darkwa.  A guy named Orleans!  At Tulane!  The freshman toted the ball just 38 times in Tulane's first six games, and the Green Wave averaged just 19.4 Adj. Points per game.  He carried 20 times in each of the last six games, and Tulane's average increased to 25.0.  Still below average, but a step in the right direction.  A 5'11, 200-pounder from Nashville, Darkwa showed durability and, relatively speaking at least, solid efficiency.  He posted a surprise 114 yards in Tulane's mini-upset over UTEP, then erupted for 331 combined yards in home losses to SMU and Southern Miss.  Despite standing at just 174 total yards halfway through the season, he ended up with 925 yards (5.0 per carry) and 11 touchdowns and grabbed second-team all-conference honors.

He's going to have to carry even more of a load in 2011, as ... well, I'm not sure quarterback Ryan Griffin has anybody to which he can throw the ball.  His three most frequent targets from last season -- receivers Casey Robottom (56-for-663) and D.J. Banks (47-for-419) and tight end Cody Sparks (43-for-427) -- have all departed Bob Toledo's squad, either by choice or by exhausted eligibility.  Receiver Ryan Grant (33-for-515 and four touchdowns) showed solid explosiveness potential (six-for-128 against Tulsa, three-for-140 and two touchdowns against Rice), but we'll see what happens when he makes the step up to No. 1 target.  And even if he works out beautifully, who's No. 2 exactly? 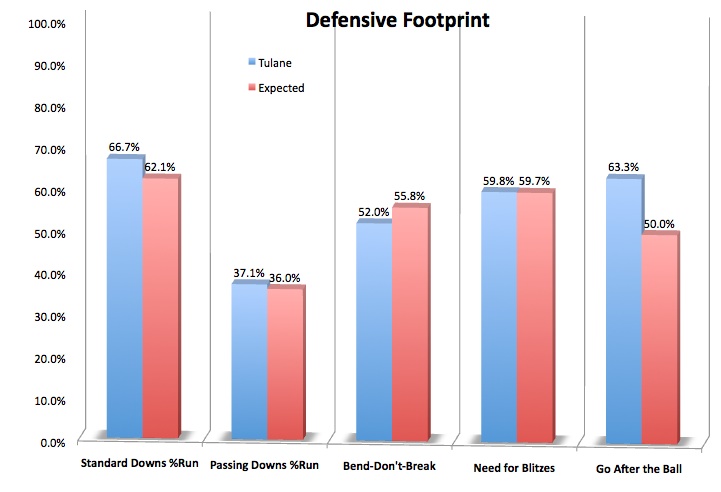 Credit where it is due: Tulane attacked and went after the ball.  Four players recorded at least two forced fumbles, seven players broke up or defended at least five passes, and their pass rush was downright strong.  Defensive ends Austen Jacks (6.0 TFL/sacks, 2 FF, 2 FR) and Dezman Moses (11.5 TFL/sacks, 3 FF, 2 FR, 1 INT, honorable mention all-conference) give Tulane one of the more accomplished pairs of pass rushers in Conference USA, and Tulane had no fear in attacking with players like linebacker Trent Mackey (7.5 TFL/sacks, 3 FF, second-team all-conference) and nickel back Ryan Travis (8.0 TFL/sacks, 3 FF).

The problem: they couldn't stop the run to save their lives.  The other problems: their best run stuffer (tackle Justin Adams) is gone from said terrible run D, and now their best cornerback (all-conference Phillip Davis -- 3 INT, 12 PBU) is gone too.  For what Moses and Jacks brought to the table against the pass, they lacked against the run.  And while they have size of which few mid-majors can brag at defensive tackle (senior Chris Asumnu is 6'2, 300; senior Cedric Wilson 6'2, 290), the production there is severely lacking without Adams (Asumnu and Wilson combined for 3.0 TFL/sacks).  If defensive coordinator Steve Stanard cannot figure out how to plug the leak at the line of scrimmage (and in the LB corps, where seemingly only Mackey was worth writing home about), then Tulane could steal LSU's secondary, and it wouldn't make much of a difference.

In honor of either the city or the running back -- your choice -- how about a little "Orleans Parish Prison" from Johnny Cash?  Easily the most underrated of the legion of Cash prison songs.  "Well have you seen my green-eyed son? He shot a man down with a sawed-off gun. And they found him down by the Pontchartrain/where they cuffed his arms with a big iron chain."

Tulane did do a nice job of attacking the ball last year.  We'll dive further into the Defensive Footprint figures at some point, but here are the top ten mid-major defenses according to the "Go After the Ball" measure:

Clearly this measure does not tie all too closely to pure quality, but hey ... being good at something's better than being good at nothing, right? 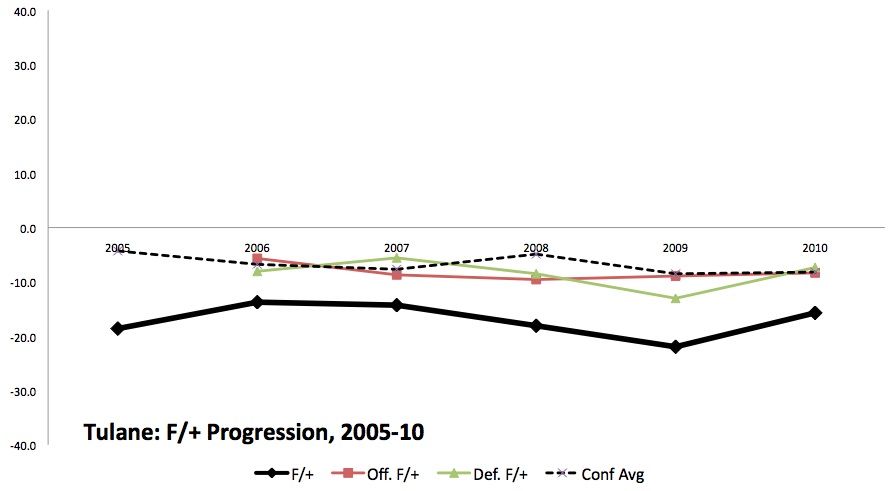 So Tulane has a good, young running back, a couple of good defensive ends, a decent secondary, and a 2010 YPP Margin that screams "They were unlucky!"  But it's been a long time since they were even decent -- their best F/+ finish from 2005-10: minus-13.7% and 98th place in 2006 -- and circumstance just has not been kind to the university's athletic program recently.  Even with much better luck, how far do we see this team rising?

Bob Toledo is still the head coach at Tulane despite almost no success, primarily because of what he started with in 2006.

Dickson thought back to Toledo’s starting point: a week in 2006 when members of the staff showed up with their spouses to plant flowers outside the Wilson Center to ready the Hurricane Katrina-battered building for Toledo’s first recruiting weekend.

"When you are only measured by 12 snapshots, you know what, you’re right, all the hubbub and fury that comes with it, yeah, it doesn’t look good … in a lot of aspects," Dickson said of the Green Wave’s 4-8 record this year.

"But when you measure it starting in a damn flower bed and going to where we are today, and looking at everything from academic results to culture, that change in attitude, in results, the 26 kids I talked to, their buying and belief, and some evidence that there is reinforcement of that from the way we are competing" makes it different.

Be it because of the location, the Katrina damage, the color scheme, the '87 Independence Bowl ... it's easy to find reasons to root for Tulane, and I guess it would be somewhat poetic if a back named Orleans led them to just their third bowl since Mack Brown left in the 1980s.