Hal Mumme is a popular guy among the blogger class.  Chris Brown loves him.  So does Spencer Hall.  Doc Saturday?  But of course.  Senator Blutarsky?  Named his poll after the man (his Twitter account too).  So when a Mumme disciple gets a chance, blogger royalty (briefly) pays attention.  And apparently, so do citizens of Ruston, Louisiana.  The good folks of Ruston (likes: Terry Bradshaw, peaches, and mudbugs -- in either etouffe or mascot form) went through the turnstiles a record number of times in 2010 to watch what new Louisiana Tech head coach, and former Mumme and Mike Leach underling, Sonny Dykes could do.

And how was Dykes' first year at Tech?  Fine, I guess.  The Bulldogs went 5-7 and actually won a one-possession game for the first time since 2008, but they also scored fewer and allowed more points than they had in 2009.  Tight home losses to Southern Miss (not conference mates) and Fresno State (conference mates, because geography makes total sense) prevented the Bulldogs from becoming bowl eligible for the second time in three years, but hope is not lost in Ruston.  With talent in the backfield and another year in Dykes' (and offensive coordinator/Tuberville scapegoat Tony Franklin's) version of Mumme's Airraid system, Tech could be decent, or at least bad-but-entertaining, again in 2011. 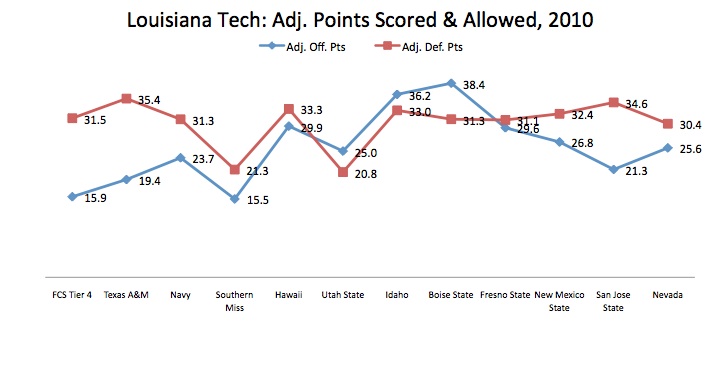 For the most part, Louisiana Tech's defense was consistently poor in 2010 (aside from a random, solid performance against Utah State).  The most interesting goings-on were on the offensive side of the ball.  Ross Jenkins took over the starting quarterback position before the Hawaii game, running back Lennon Creer got rolling (no idea if those two things are related) and Tech's offense improved significantly when September turned into October.  Tech fielded a downright solid offense in October before a bit of a November fade.  Jenkins is gone, however, so the training wheels are coming off this fall for junior-to-be Colby Cameron.  The training wheels may need to go back on for a Tech defense that was solid in denying big plays but seemingly ran backwards for seven yards before even trying to tackle opposing running backs.

(Why the major difference between La. Tech's 86th-place ranking Adj. Points Per Game and 69th-place ranking in Def. S&P+ below?  Two things: pace and garbage time.  Tech's pace was high, and it looks like they gave up quite a few garbage-time points, which would make a difference in Adj. Points but not Def. S&P+.  So there you go.) 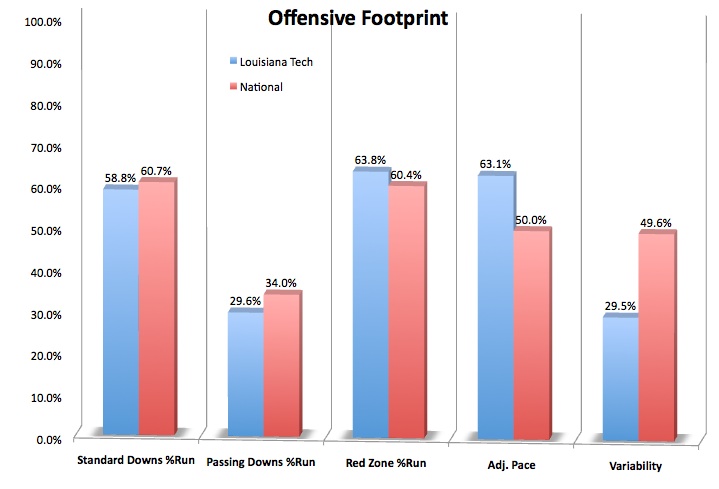 Fast pace?  Check.  Low variability?  Check.  Tech's offense showed signs of Airraid goodness in 2010, but Sonny Dykes was smart enough to still feature heavy doses of Lennon Creer.  The 6'1, 215-pounder from Tatum, TX, blazed through most of October and November after a low-volume start.  His 35-carry, 149-yard performance against Boise State allowed Tech to play it safe and keep things close for most of the first half, and his combined 47 carries for 359 yards and four touchdowns helped to win the New Mexico State and San Jose State road games.

Creer was, for the most part, a "great totals against terrible defenses" back, but he's got enough size to complement Dykes' Airraid tendencies nicely (a lot like Zach Line at SMU).  Due to Creer and a rock solid offensive line -- plus the fact that Sonny's dad Spike "What's it gonna take to get you into this Ford?" Dykes was not exactly an air-it-out kind of guy at Texas Tech, and Sonny probably still wants to be invited home for Thanksgiving -- Tech's offense was more conservative than your basic Mumme offense.  The personnel did not quite fit the scheme, but it resulted in an interesting dichotomy of efficient-not-explosive running and semi-explosive-and-inefficient passing, for whatever that's worth to you. 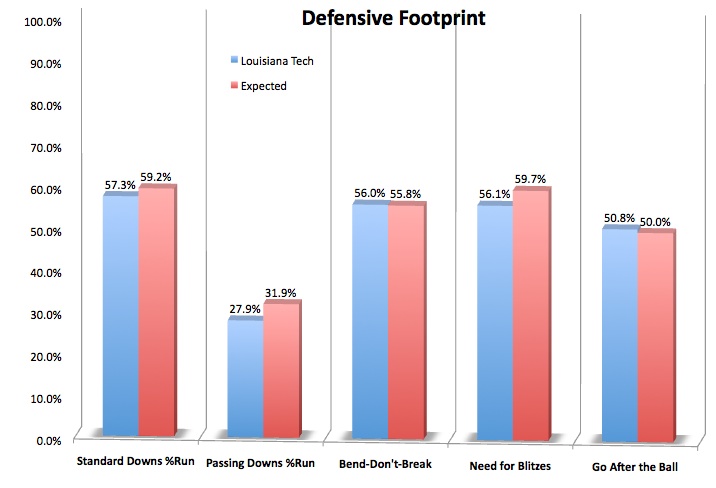 Here's where numbers and tendencies clash.  On a per-play basis, Tech was better against the pass than the run, but opposing coaches threw an inordinate amount against them.  So who are you going to believe, the always-trustworthy numbers, or "coaches" who are "paid a lot of money" to "exploit defensive weaknesses"?

Odd tendencies did bleed into the stat line, where Louisiana Tech's 4-2-5 defense looked nothing like your typical, iffy mid-major defense.  They had the speed to put a stop to most big plays (a major feature of the 4-2-5), but they were a sieve near the line of scrimmage.  You know how we talked about UTEP trying to get bigger this offseason?  It probably wouldn't hurt Louisiana Tech to try the same thing.  Their starting defensive line against Nevada averaged just 246.3 pounds (235 and 230 at end, 270 and a staggering 250 at tackle).  Granted, 270-pound Mason Hitt was a solid playmaker (10.5 TFL/sacks), but still ... here's where I point out that Cam Newton weighs 250 pounds.  When you're basically playing a nickel back as part of your base defensive package, you probably need at least a little more girth up front.

Sheer size helps at times, and if I'm a Louisiana Tech fan, I'm wondering what sophomore-to-be Justin Ellis (6'2, 340) can do at tackle.  In just four games, he managed just 3.0 tackles (0.5 TFL/sacks, 1 FR), but ... 340!  He was listed as a starter on the pre-spring depth chart, and he could combine with now-255-pound Shakeil Lucas to make for a Bol-and-Bogues type of combination at tackle.

Beyond the size issue, there is some quality returning, namely in Barney Stinson's favorite college football player, defensive end Matt Broha (14.0 TFL/sacks, 2 FF, 1 FR).  He was strangely consistent, managing at least 0.5 tackles for loss in all but one game last year, and again ... Broha.  Legendary.

In the last five years, Tony Franklin has served as offensive coordinator at four schools.  Here's how they graded out according to FO's overall Off. F/+ measure:

Franklin's offensive prowess might be a little overstated, come to think of it ... though I assume quite a few Auburn fans are impressed that he managed to field an even worse offense the year after he left AU... 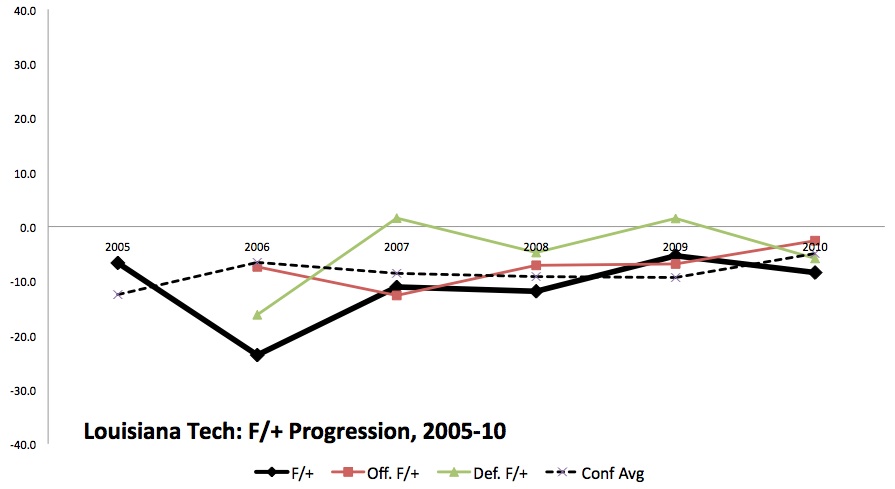 Tech has been hovering around league average for a WAC team in recent years, at least since Jack Bicknell left following the disastrous (3-10) 2006 season.  Derek Dooley and now Sonny Dykes have brought Tech back to a respectable level, and it would appear the upside with Dykes is solid.  The 2011 campaign, not a particularly easy one (enjoy that Fresno-Oxford-Reno three-game road trip in November, guys), will likely preclude any major success, but improvement from both Colby Cameron through the air and Tech's defensive front on the ground could bring about somewhat realistic bowl hopes.  The home games against Houston and Hawaii will be key, however.  This schedule is not built for a late charge to bowl eligibility.