Summer Vacation: The Navy Midshipmen and the Art of Keepin' On Keepin On

Share All sharing options for: Summer Vacation: The Navy Midshipmen and the Art of Keepin' On Keepin On

The service academies do it right.  No pretense, no pretending they are something they aren't.  They (and thanks to Army's recent restoration, it is a full "they" with Army, Navy and Air Force) assume they are getting by with a lot of players who didn't get scholarship offers elsewhere, and they figure out how to beat you with those players anyway.  "You're bigger, stronger and faster than us?  Fine.  We're going to cut block you, we're going to hit you from unexpected angles, we're going to take away your instincts, we're going to make you think far more than you want to be thinking on the field, and we're going to run circles around you."  It's more-or-less how Wake Forest won the ACC in 2006 and beat Florida State three straight times, it's how Navy has won at least eight games each year since 2002, and it's why I really, really wanted Vanderbilt to go after Navy coach Ken Niumatalolo this past offseason.  Alas.

It doesn't always work, of course -- in 2009, Navy pantsed Missouri but lost to 6-7 Hawaii, and it appears that Wake Forest's run of strong play may have run out -- but the service academies, especially two of the three, have won tons of games in recent years by accepting the need for underdog strategies and working them to perfection.

Navy's underdog strategy of choice, of course, is the good ol' flexbone (mixed with a nice-and-sneaky 3-4 defense, a "misdirection" defense if ever one existed).  Paul Johnson figured out how to run it to perfection, and Niumatalolo continued the string of solid play from the Middies when Johnson left to win an ACC title at Georgia Tech.  The flexbone is proof that there are a lot of ways to win a college football game, and there is a hefty amount of flexbone goodness on the YouTubes.

Because of the flexbone, Navy has a clear, distinguishable identity, an enjoyable, successful brand of football.  Now they just have to figure out how to succeed without the face of their program's recent history, future president Ricky Dobbs. 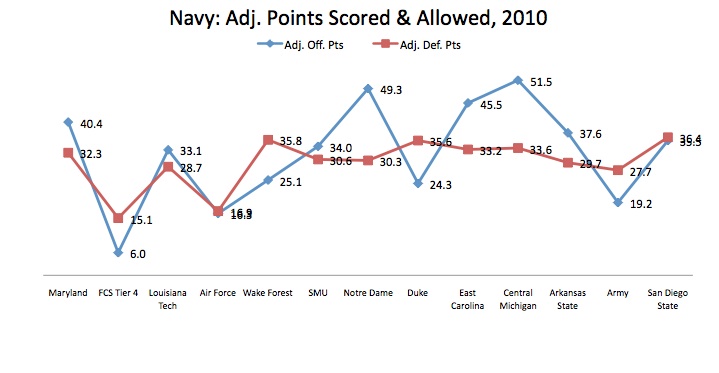 Navy's 2010 season followed the "successful Navy season" script rather closely.  Play more talented teams, keep things close, maintain possession for quarters at a time, pull out close wins.  Sure enough, Navy overachieved according to their general level of performance, going 9-4 while playing like a 7-6 team.  They were close to doing even better, but they actually lost three one-possession games.  A bit better on the goal line, and the Middies beat Maryland.  A bit better on D, and they beat Duke.  But perhaps the Middies were due a smidge of bad luck after going 10-4 while playing like a 6-8 team (according to Adj. Record) in 2009. 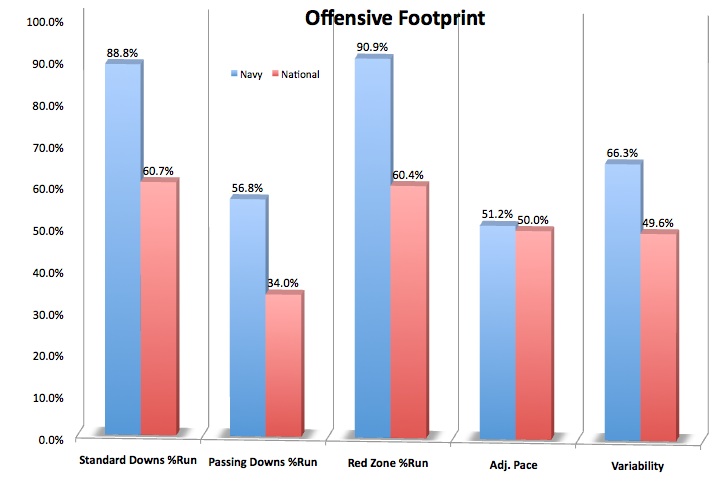 So how much of a system's success is due to individual difference-makers, and how much is due to system?  Navy fans are hoping it's a good portion of the latter, as their chief ball-handler from the past two years (and 19 wins) is gone.  Ricky Dobbs departs after 27 games in which he ran for 2,170 yards and 41 touchdowns and passed for 2,558 yards and 19 touchdowns to boot.  After an offseason of "He's a darkhorse Heisman candidate!" hype, Dobbs struggled a bit on the ground in 2010.   His per-carry average fell from 3.8 to 3.6, but he generated those yards against lesser competition; his Adj. POE fell from +6.7 to -18.4.

However, while Dobbs' rushing numbers were sinking, Navy's offensive effectiveness was increasing (Georgia Southern and Navy games aside).  First of all, coaches trusted Dobbs to pass a bit more; he averaged five more passes per game, dropping Navy all the way to fourth overall in Adj. Run-Pass ratio (the horror!), tossing mostly to Greg Jones, whose 37.0% Target rate was one of the highest in the country.  Jones rewarded the trust (and took advantage of unsuspecting defenses) to the tune of 20.1 yards per catch (13.0 per target) and five touchdowns.  His 33 catches were more than triple those of Navy's leading 2009 receiver (Marcus Curry and his 10 catches), and it opened up a new dimension for Navy, even if they were still a run-first, run-second team.  Even with the element of surprise in their favor, Navy's passing game was particularly effective in 2010, ranking 16th in Passing PPP+ after ranking 32nd in 2009.

Of course, Dobbs and Jones are both gone, so we'll see how multi-dimensional Navy is this fall.  The two projected starting receivers -- Doug Furman and Brandon Turner, both big targets at 6'3 and 6'4 -- caught a combined seven passes a year ago.  Good thing there's experience in the backfield.

(Actually, that's a misleading statement. Being that this is Navy, and players know to wait their turn, every projected starter on both sides of the ball is either a junior or senior; this despite the fact that they lost quite a few important starters on offense and defense.) 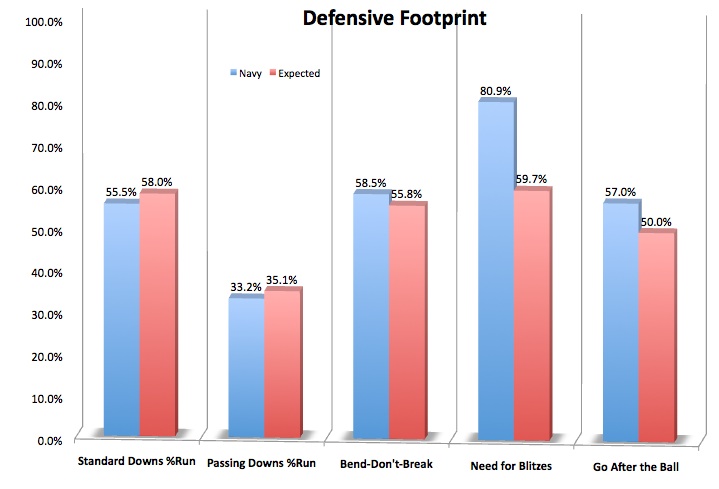 Running their patented 3-4 defense, Navy attempts to bait offenses into feeling a little too comfortable with the cushions they receive and the openings they find near the line of scrimmage.  Despite a line that ranked just 103rd in Adj. Line Yards, Navy's run defense wasn't terrible last year.  They were reasonably efficient and prevented big plays, but Navy ran into problems in 2010 in the passing game.  Unlike previous years, they allowed a little too big a cushion at times, posting the third least-efficient pass defense in the country and intercepting only seven passes.  They still ended up with a positive turnover margin because they were able to force 18 fumbles (opponents committed 26 fumbles in all), but they came a little too close to breaking to be an overly effective bend-don't-break defense.

For better or worse, the Middies have to replace a lot of experience in 2011, especially in the linebacking corps.  Tyler Simmons was the resident "I'll make all the tackles five yards downfield so others can go for the big plays" linebacker, posting 101.5 tackles overall and just 2.0 TFL/sacks (albeit with three forced fumbles and three fumble recoveries).  That type of backer is typically replaceable, and there are a number of candidates for extra playing time, including Max Blue (43.5 tackles, 1.0 TFL/sacks), Matt Warrick, Caleb King and Matt Brewer.

Also gone: outside linebackers Aaron McCauley and Jerry Hauburger, who combined for 121.5 tackles and 16.5 TFL/sacks).  McCauley was particularly effective from the attacking OLB role and had a year of eligibility remaining, but he left the team this spring.

One more key departure: twelve-year starting safety Wyatt Middleton (72.0 tackles, 5 FR, 5 PBU).  He was a rock in the secondary, but as he has now reached retirement age, one can understand him wanting to move on with the golden years of his life.

Look! Another opportunity for a Curtis Mayfield interjection!  We're going with "Keep On Keeping On," being that Navy has now won between eight and ten games for eight consecutive seasons.

I've long had a theory that Navy's offense is so unique that it is almost impossible to play well against it the first time you see it.  The second time, reacting to the flexbone might begin to become distinctive.  (At least, that's what I was telling myself as a Missouri fan after watching Dobbs and company embarrass the Mizzou defense in the 2009 Texas Bowl.)  Does this theory have any real legitimacy?  Quite possibly. 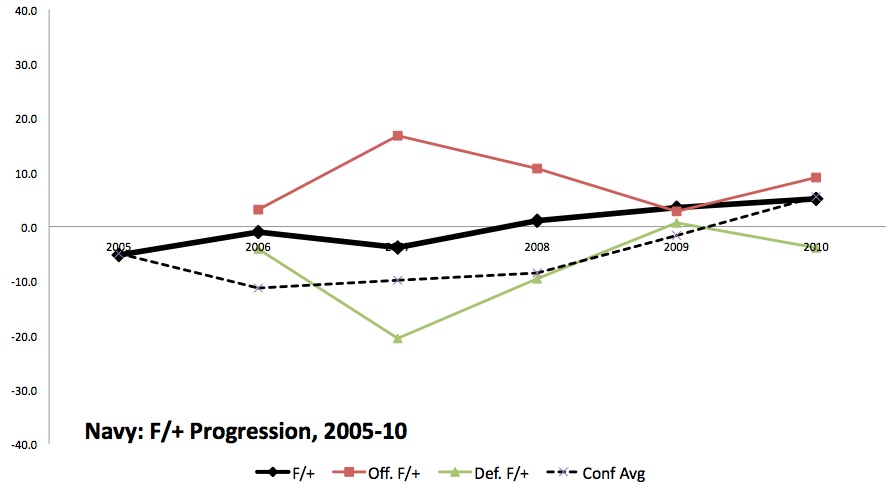 Bad sign: the 'underdog' magic sometimes wears out when the right players walk out the door (just ask Wake Forest).

There is plenty of reason to wonder if Navy might fall back to the pack a bit and struggle for bowl eligibility in 2011.  Navy must make trips to South Carolina, Rutgers, Notre Dame and SMU in 2011.  But I'm not the type to bet against a streak. Kriss Proctor looks like he could be yet another effective option quarterback for the Midshipmen, and when a team wins for this many years in a row, I'm just going to continue picking them to win until they don't.

(Sorry, Army -- that means I'm also picking Navy to beat you for the tenth straight year.  Never.  Bet.  Against.  A streak.)