A couple of weeks ago, we took a look at the growing pains teams typically suffer when moving from FCS to FBS.  Of the 17 teams who have taken the leap since 1990, only three have gone over .500 against FBS competition in their first three seasons.  The median win percentage is about 0.280 in those years.  Marshall's was 0.886 from 1997-99 after making the leap.  They won five MAC titles in their first six seasons and looked to make another no-brainer leap, this time to the Conference USA.  But they became stagnant in great coach Bob Pruett's final two seasons, going just 14-10, and entered the CUSA in much less solid position.

Mark Snyder took over for Pruett but couldn't engineer a single winning season in his first four years.  Though the Herd reached 6-6 in his fifth season, he still resigned under pressure.  As we can see in the chart at the bottom of this post, the Herd were basically exactly the same team every year under Snyder, barely ever improving or regressing.  It was probably a good time for a move.

Seven years ago, Marshall was an epic success story, rising from the 1-AA ranks to the mid-majors with no struggle whatsoever.  Now, they are a team that has zero 7+ win seasons in seven years, a team consistently performing like an average-and-no-better CUSA team.  What happened exactly?  Marshall's athletics budget is competitive with most CUSA programs not named Central Florida, their stadium leaves little to be desired compared to others in the conference not named Central Florida or East Carolina ... what's the problem?  Just a bad hire from which they are still recovering?  If Doc Holliday is the right guy, is this program capable of a quick turnaround?

Despite a rather incredible amount of youth, Marshall showed hints of potential in their first season with the man from Hurricane, West Virginia (real place, and with good drinking water no less!), at the helm.  They threw a major scare into West Virginia, and their defense improved throughout the season.  Some interesting components return on that side of the ball in 2011, but it won't matter if they can't find an offense. 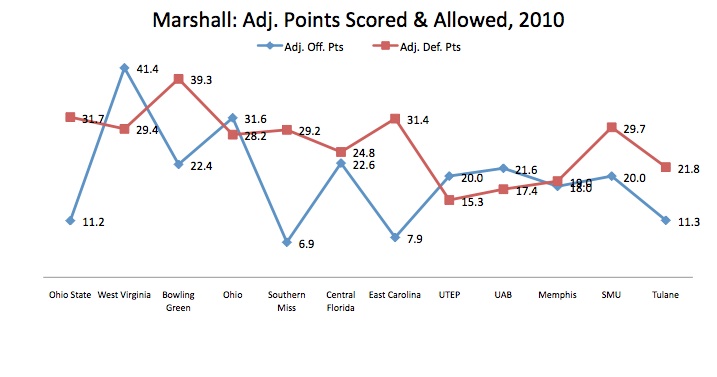 In 2009, I got to watch, up close and personal, what happens when youth takes over a football team.  Missouri played almost 40 freshmen, redshirt freshmen and sophomores on their way to a decent-not-great 8-5 season.  In 2010, despite no true All-American contributions, Mizzou improved to 10-3.  No single player took a huge star turn; in fact, they lost their 2009 stars, Danario Alexander and Sean Weatherspoon.  But everybody who got their feet wet as youngsters in 2009, got a decent amount better in 2010, and the team improved significantly because of it.

Why do I share this above the fold in a piece about Marshall?  Because the Thundering Herd played 28 freshmen and redshirt freshmen last season.  And the jagged ups and downs in the Adj. Score chart above shows what tends to happen when you do that.  Marshall played wonderfully on offense against West Virginia, then failed to even play at an average level over the last two months of the season.  The defense was average, then terrible, then average, then quite strong down the stretch.  Like Joey in Dawson's Creek, the team went off in search of itself, and with haphazard results.

Did I just make a Dawson's Creek reference?  Is it too late to strike that from the record?  And we're only one-sixth of the way through these profiles ... god only knows what references I'll be making in two months.

Anyway, youth was served in 2010, and while that doesn't guarantee future success, there's a decent chance that, without any major talent infusion or change in tactics, Marshall simply gets better in Doc Holliday's second year.  Experience does that to you sometimes. 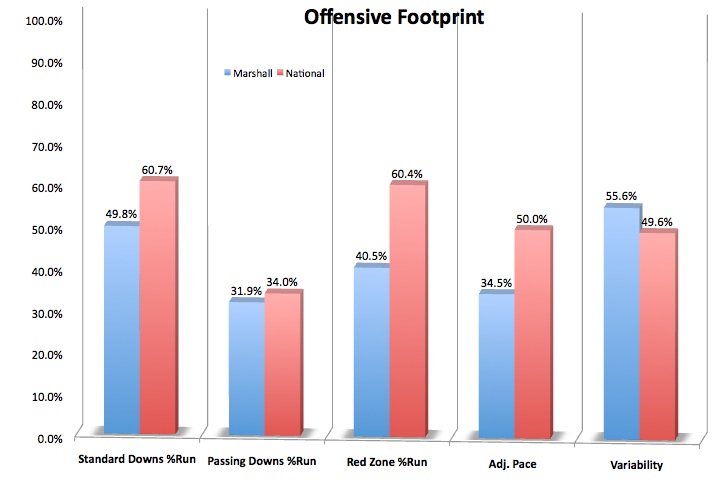 Marshall offensive coordinator Bill Legg spent a few years as a higher-up on Joe Tiller's Purdue staff, so it's quite possible that he's rather passing-inclined; it should be no surprise that Marshall passed a rather significant amount in 2010.  However ... if Emory Bellard or Paul Johnson were the offensive coordinator, Marshall still might have passed a lot ... because they sure as hell couldn't run the ball.

With an average set of targets, quarterback Brian Anderson threw for 2,358 yards (6.1/pass, 57% completion rate, 20 TD, 15 INT) in 2010.  As we see above, quite a few of those passes came on standard downs, meaning a) we should have seen a higher completion rate than 57%, and b) Legg and co-coordinator Todd Petersen had no faith whatsoever in the run game.  For the season, running backs Tron Martinez and Martin Ward combined for 607 yards (3.5 per carry), just two touchdowns, and a combined -22.2 Adj. POE.  And this despite receiving clemency from the Adj. Line Yards equations because of their terrible offensive line.  Yuck.

For better or worse, Martinez and Ward are both back in 2011, as are three large starters on the line (sophomore Corey Tenney and seniors C.J. Wood and Ryan Tillman).  That will help, I guess, though some new blood wouldn't be a terrible idea.

Who isn't back?  The leader of the passing game, for starters.  Anderson graduated and will be replaced by either sophomore Eddie Sullivan (10-for-20 for 160 yards and a touchdown in the Green & White game) or redshirt freshman A.J. Graham (9-for-19, 56 yards, with a ten-yard scoring run), with true freshman Conelius Jones holding an outside shot. 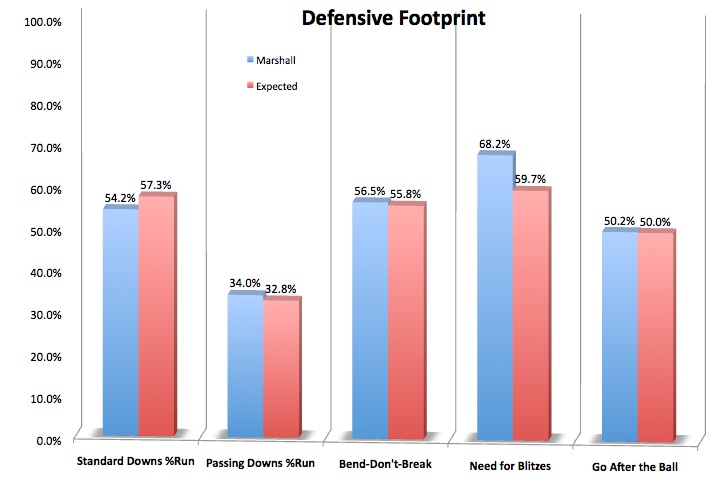 The Marshall offense may have been hamstrung by youth and ineffectiveness in 2010, but the defense was downright solid, ranking between 46th and 56th in every major S&P+ category above.  They struggled a bit with big plays, particularly on the ground, but if they weren't giving up a big play, they were giving up nothing at all.  The line was a strength, ranking in the top 50 in both Adj. Line Yards and Adj. Sack Rate, and they've got an absolute assassin returning in defensive end Vinny Curry.  The 6'4, 250-pounder was a no-brainer all-conference selection, ranking fifth in the country in sacks and posting 18.0 TFL/sacks for the season.  He got help from since-departed WLB Mario Harvey (104.0 tackles, 17.5 TFL/sacks).

Really, only two primary cogs from last year's defense won't return this fall -- Harvey and solid tackle Michael Janac (23.0 tackles, 5.5 TFL/sacks, 2 FF).  Will see if their absence creates a lag in what was truly a solid run D.  Teams figured out that they needed to throw quite a bit on standard downs because they just weren't going to blow Janac, Curry and company off the line of scrimmage.

If Harvey's loss in particular can be absorbed, things look good.  Out of either James Rouse, Marques Aiken or Trevor Black should emerge a decent complement at end opposite Curry, and linebackers Devin Arrington, Tyson Gale (from lovely Alva, OK, where I once watched a high school cross-country meet) and Kellen Harris combined for 128 tackles, 12.0 TFL/sacks, and 4 FF last year.

I don't know, is Earp's Vendetta Ride a song? 'Cause, you know, Doc Holliday and all.  Or should we save this one for their surprise Conference USA title run of 2011?

Quite a few good offenses on that list, and quite a few terrible ones. 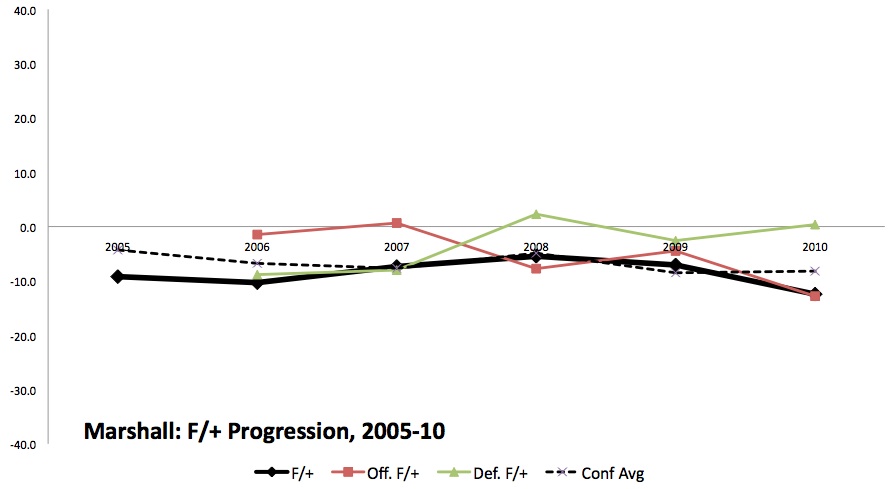 Color me semi-optimistic about Marshall moving forward.  Their average recruiting rankings outpace their recent performance, which suggests at least a little bit of potential.  They were incredibly young last year, they return nine starters from a good defense, and their YPP margin suggests they were a bit unlucky to boot.  If those surrounding the new quarterback on offense can help form a semi-competent unit, Marshall should at least be able to duplicate their 2010 efforts.  If the experience level's across-the-board growth leads to similar growth on the field, then bowl eligibility is a distinct possibility.

Unfortunately for Marshall moving forward, they're in the wrong division.  UCF and Southern Miss both appear built for long-term success, and East Carolina has been a very steady program in recent years.  Their overall potential is at least solid, but it is dinged in part by the company they keep in the East Division.  Bowl bids should not be too much to ask for this program, however, and I expect Marshall to be bowling (albeit in a semi-unattractive venue) this coming December.