It seemed to make sense on paper.  Skip Holtz departs for South Florida, leaving behind a strong defensive team at ECU, and he is replaced by ECU alum Ruffin McNeill, who engineered an impressive turnaround for Mike Leach's defense at Texas Tech (minus-2.3% Def. F/+ in 2007 before he took over, +5.9 Def. F/+ in 2009).  If he can maintain on defense and maybe gin up a little Airraid-esque excitement on offense, then that's a pretty good hire, right?

Sure enough, East Carolina's offense took off in McNeill's first year, throwing as much as almost anybody in the country and setting offensive records with a young Leach protege calling the plays.

Also: their defense went into the tank.

East Carolina played a more exciting brand of football in 2010, but as has been said here before, exciting ain't always good.  The Pirates went to a bowl game for the fifth consecutive year (with their semi-sustained success, it's easy to forget just how far they had fallen before Holtz took over -- they had gone just 7-28 in the three seasons prior to Holtz's arrival), but their loss in the Military Bowl dropped them to a below-.500 finish for the first time since 2005.

McNeill has already proved himself a better coach than he is a healthy one (sorry, it had to be said), but what's in store for his second season?  Looking at personnel, it's easy to predict a rebound on defense and a slight regression on offense.  It's also easy to predict the opposite.  In other words, I have no idea. 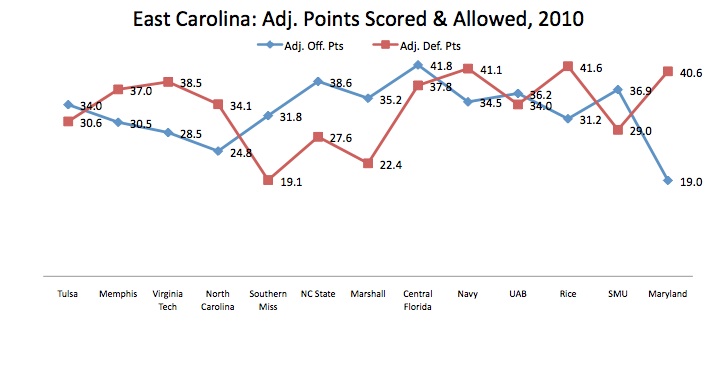 As Louisiana Tech also learned last season, the Airraid puts butts in the seats.  In their first season in an expanded Dowdy-Ficklen Stadium (with 7,000 extra seats and a totally badass Pirate logo at midfield), ECU averaged almost 50K per game in attendance, easily the best mark in Conference USA.  Fans were treated to some interesting games as well.

Looking at both the scores and the the Adj. Points chart above ... there was a lot going on for ECU in 2010, wasn't there?  You had the hail mary win against Tulsa (throw it to the 6'8 kid!!) ... the "fall down by 20, go up by eight, fall back down by five, then win anyway" shootout over Southern Miss ... the "blow a 21-point lead, then win in overtime" upset of N.C. State ... the "somehow give up 71 points at home to one of the slowest-paced teams in college football" loss to Navy ... the "score 27 points in the fourth quarter" win over UAB ... the "come back from down 14 with five minutes left to win in OT" game against SMU ... 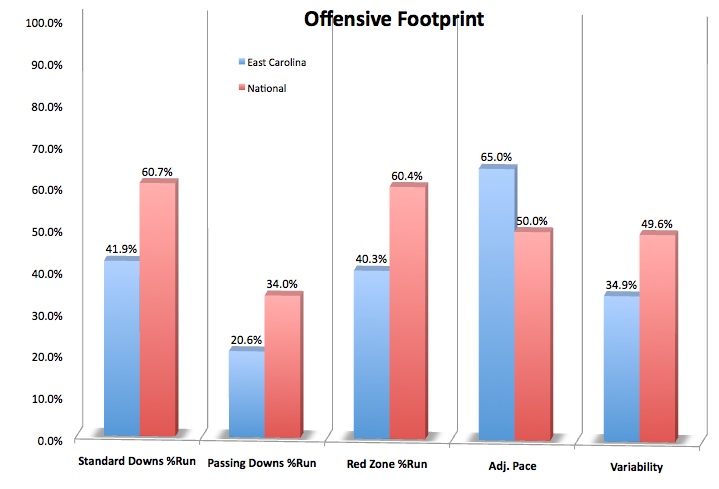 High pace, low variability, second-lowest run% on standard downs, sixth-lowest run% on passing downs.  If you had no idea Ruffin McNeill and 27-year old offensive coordinator Lincoln Riley had been associated with Mike Leach in Lubbock before ... you'd quickly begin to suspect it.  Riley walked on to Leach's early Tech teams, then stayed on as a graduate assistant.  He was hired as a receivers coach soon after and, after Leach was dismissed, ended up calling plays for McNeill in the 2009 Alamo Bowl.  Apparently McNeill was impressed.

So were ECU fans, I assume, after seeing what Riley could do with the parts he inherited in his first season.  Quarterback Dominique Davis joined the ECU team in August of last year, and in his first four months on campus, helped the offense set 15 single-season records.  After never registering a positive Off. F/+ in the last four seasons (the highest: -0.6%, 57th overall, in 2007), ECU exploded for a +11.2% rating, 12th-best in the country.  Theirs was the third-best mid-major offense in college football, behind just Nevada and Boise State (if Boise still counts as "mid-major").  What can you say?  In the right hands, the Airraid just works.

Dominique Davis proved himself a superb passer in this system, posting 3,967 yards (6.5/pass, 65% completion rate), 37 touchdowns and 16 interceptions on the season.  But he added a running element that Leach and company never really had in Lubbock (sorry, Sonny Cumbie) -- he rushed for 270 yards minus sacks and registered a +8.8 Adj. POE.  He was able to make something happen even when the defense had the reads covered, and ECU quite clearly benefited from it. 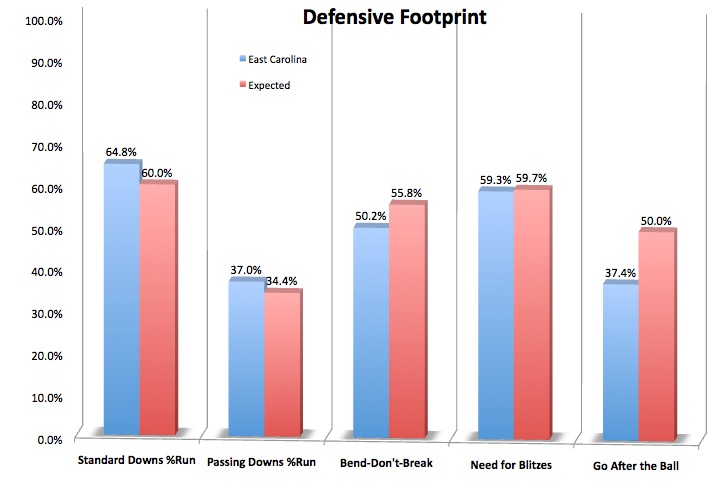 One thing is certain in looking at the chart above: opponents did not hide their intentions.  They were going to run the ball until ECU stopped them ... and ECU rarely stopped them.  The Pirates were "pre-Ruffin Tech" bad on defense (worse, actually), and while they were not particularly good anywhere, they were especially egregious against the run.  They had one of the ten worst big-play defenses in the country both against the run and on standard downs in general.  As good as the defense was under Holtz (never in the negative; their worst recent performance was a 0.6% Def. F/+ rating in 2007), it just fell apart.

Why?  I don't want to absolve the coaching staff here -- a drop this precipitous has to make you at least temporarily wonder if the right hire was made at defensive coordinator -- but the solid defense from 2009 lost nine starters, then lost two key players, LB-DE hybrids Justin Dixon and Marke Powell, early in the season.  The result?  A terribly thin front seven and one of the worst pass rushes in the country.  ECU couldn't get pressure on the quarterback, blitzing or not blitzing, so occasionally opponents would take time off from gashing the Pirates for huge gains on the ground ... to gash them for huge gains through the air.  A potentially decent secondary had to cover their men for far, far too long.

The clear lack of depth on the defensive line (compounded by the loss of their best tackle, Josh Smith, to expired eligibility) could be handled in any number of ways.  What did McNeill and defensive coordinator Brian Mitchell decide to do?  Move from four linemen to three!  Math, for the win!  The Pirates are breaking in a 3-4 scheme this year, and considering the dimensions of some of their best playmakers (Justin Dixon was a 6'1, 228-pound part-time end; Marke Powell 6'3, 220), this isn't a terrible idea.  Of the 7.5 tackles Dixon made pre-injury last year, 5.5 of them were for a loss; he could be a lovely, "mid-major Von Miller" style play-maker in the right scheme.

Why, Atmosphere's "Smart Went Crazy," of course.  ECU went from semi-conservative and defensively stout to ... crazy.

You could probably figure out where I was going to head with this... 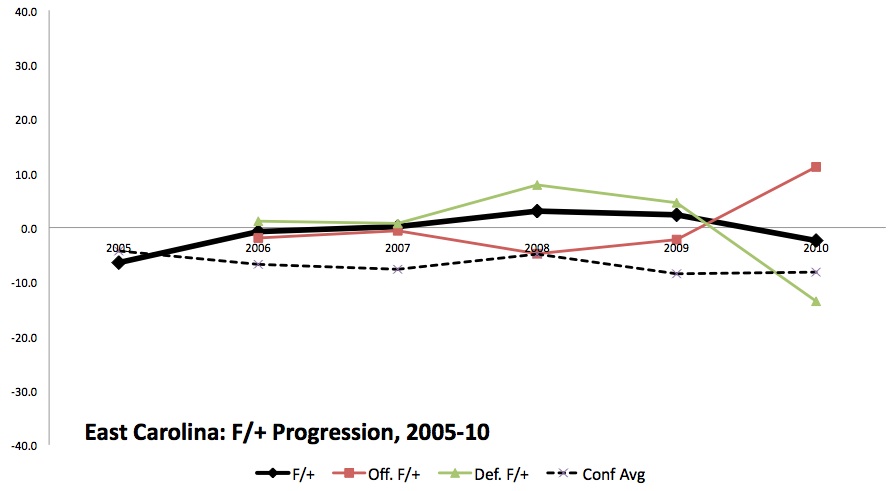 You can just tell the projections are going to be confused by ECU.  Four-year F/+ rank doesn't mean as much when both your offense and defense pulled a 180 last season.  In theory, things regress back to the mean after a surge, positive or negative.  So one would think the offense might regress a bit while the defense bounces a bit back toward its 2009 form.  And that might very well be what happens.  The defense could see benefits from health and a change to a scheme that seems to suit the personnel reasonably well, while the offense could struggle to account for the loss at running back; plus, Dwayne Harris' replacement might not be as good.  It's not hard to see things playing out this way.

It's also not hard to see the exact opposite playing out.  ECU's 2010 profile -- great passing offense, sieve of a rush D -- was what Texas Tech dealt with for many seasons, when they always looked great on offense and always struggled with defense, and it's hard to find a reason to question what the combination of Dominique Davis and Lincoln Riley might have in store for this fall.

In other words, I'm throwing my hands up on this one.   ECU's probably going to be a perfectly decent team this year, but how much of that is based on which side of the ball ... I have no idea.  Virginia Tech and North Carolina come to Greenville this fall, following a meeting with South Carolina in Charlotte.  Seven of 12 games are within the state of North Carolina, and if East Carolina proved anything in 2010, it's that they are capable of winning or losing just about any game on the slate.  Go ahead and re-up on that Toprol prescription, ECU fans.  It could be another interesting fall.