The University of Central Florida has an enrollment of 56,000.  The athletic department has a budget approaching $40 million.  It has a brand new stadium with 45,000 capacity.  It is based in a state that produced approximately 350 FBS signees this past year alone, 305 of which did not commit to go to Florida, Florida State or Miami.  Long ago, Tom Osborne famously called my alma mater, Missouri, a sleeping giant because of its potential for recruiting and support.  You want a sleeping giant?  Central Florida is a sleeping giant.  There are many steps to go (including potentially a conference change) before it could begin to realize the potential it possess based on sheer numbers, but few boast the recruiting base, growing alumni base and seeming commitment to athletics that UCF boasts right now.

In 2010, Central Florida gave a glimpse of what it could become.  The Knights went 11-3, won the Conference USA title, and held off a semi-uninterested Georgia team to win the Liberty Bowl.  It was their first bowl win among four trips in the last six years, and it represented a significant step forward for George O'Leary and the program as a whole.

The question now is, is this sustainable?  Under O'Leary, UCF has progressed in fits and starts.  An 8-5 campaign in 2005 was followed by 4-8 in 2006.  10-4 in 2007, 4-8 in 2008.  For the first time, UCF took a step forward in 2009 (8-5), then took another step forward in 2010.  The offense was the best of the O'Leary era and returns enough pieces to be dangerous again in 2011, but they gave themselves little margin for error and might find the going a bit tougher this fall.  They'll have to be solid, as the defense is breaking in a lot of new parts, and there are signs that luck went UCF's way in 2010.  O'Leary is starting to compile the depth and athleticism necessary for every-year success -- no matter what issues he's had in the past, the guy can coach -- but we'll see if he and the Knights can avoid at least a temporary step backwards this fall.

Recipe for sure success: throw a 5'11, true freshman quarterback into the mix from day one, sit back, and watch him thrive immediately.  That's the lesson we take away from UCF's successful 2010 campaign.  Jeff Godfrey chose UCF over offers from Florida State, Miami, Michigan, Georgia and others, and was, by the third game of the season, O'Leary's man. As should always be expected from a young quarterback (especially a true freshman), UCF's offensive performance was all over the map from an Adj. Points perspective, but the end result was something far more successful than one would normally expect from such an experiment.  With Godfrey thriving late in the year and defense playing average to great ball from week to week, UCF won double-digit games for the second time in four years.  And with three more years of Godfrey to come, it's clear why you're hearing more and more mention of UCF as the Conference USA's No. 1 program. 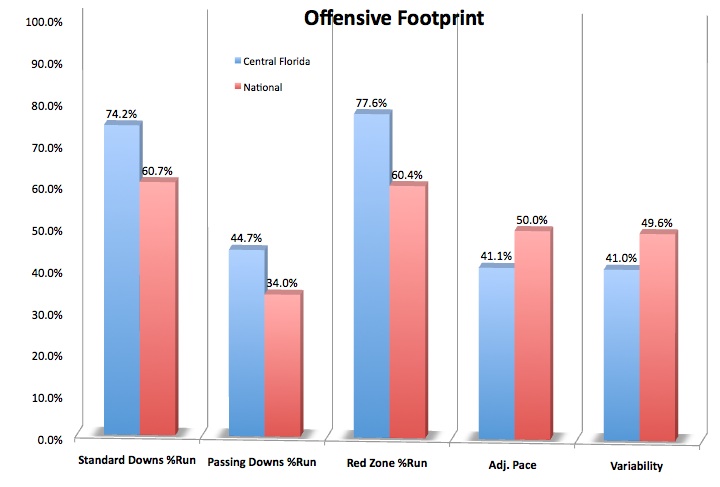 I'll give UCF credit for one thing above all others: they knew who they were on offense.  They had a talented-but-ridiculously-young quarterback behind center, and their goal was to keep the pressure off of him.  They made excellent play-calls on standard downs, and they ran the ball a ton.  They kept things at a slow pace, and they rarely varied from the script.  Quite a few of the passing downs passes were of the rollout-with-run-option variety.

If this doesn't work, it's considered unimaginative and too conservative.  Since it did work, it's considered principled and smart.  UCF was good enough at the run -- with both Godfrey (566 yards, 10 touchdowns, +8.5 Adj. POE) and the duo of Ronnie Weaver and Latavius Murray (1,527 yards, 22 touchdowns, +15.6 Adj. POE) -- that it opened up success in standard downs passing, and with as few passing downs attempts as possible, Godfrey's passing line was downright marvelous for a true freshman (2,159 yards, 9.1/pass, 67% completion rate!, 13 TD, 8 INT).

(The backfield gets crowded in 2011, by the way -- Weaver and Murray return, but they'll have to split carries with Brynn Harvey, who rushed for 1,109 yards in 2009 but missed all of last season with a knee injury.) 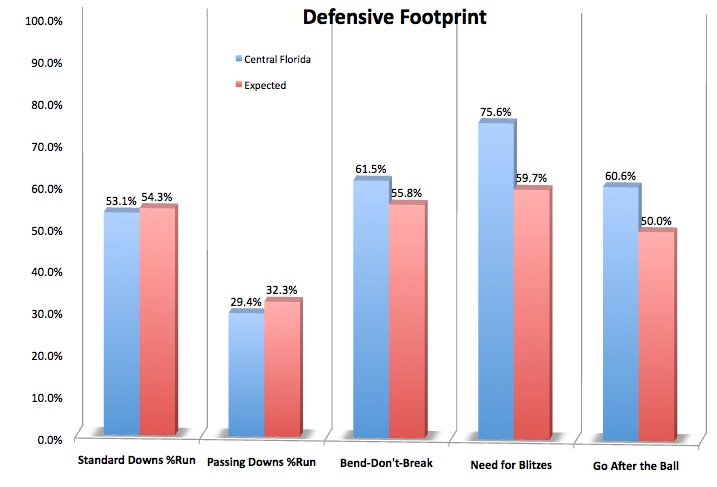 George O'Leary is a defensive-minded coach.  Before his stints at Georgia Tech, Notre Dame (ahem) and UCF, he was Bobby Ross' go-to defensive man with both Georgia Tech (defensive coordinator, 1987-91) and the San Diego Chargers (1992-93).  Since 2006, UCF has consistently had one of the better (or the best) Conference USA defenses.  On the defensive side of the ball, coaching means a little more and returning talent means a little less.  UCF fans better hope that's the case, anyway, because the 2011 UCF defense is not going to look much like the one that took the field in 2010.  Gone are both star end (and future NFL OLB) Bruce Miller (52.0 tackles, 13.5 TFL/sacks, 2 INT) and one of his primary counterparts, David Williams (27.0 tackles, 6.0 TFL/sacks).  Gone are both outside linebackers, include Derrick Hallman (73.5 tackles, 8.5 TFL/sacks, 4 FF!, 1 INT, 6 PBU). Gone are cornerback Justin Boddie (41.5 tackles, 6 PBU) and strong safety Reggie Weams (33.5 tackles, 5 INT).  In all, only four starters return.

That's not to say there will not be talent, of course.  End Troy Davis displayed big-play potential, both last year (8.0 of his 21.0 tackles were for a loss, and he broke up six passes and picked one off) and in this year's spring game; he'll line up opposite Darius Nall (27.0 tackles, 9.5 TFL/sacks, second-team all-conference).  Throw in tackle Victor Gray (26.0 tackles, 7.0 TFL/sacks, 5 PBU ... they teach 'em to get their hands up in Orlando), and you've got yourself a line that is probably still going to be decent.  Opponents likely will not find it much easier to run on the Knights than they did last year (and they were apparently thrown enough by UCF's run D that they decided passing was a better option, even with Miller breathing down their neck).

Since I've had a criminally low amount of Curtis Mayfield representation so far, we'll rectify that with a little "Move On Up," even if it's predictable.  Now I just have to figure out how to fit a little "If There's a Hell Below, We're All Gonna Go" into one of these profiles. 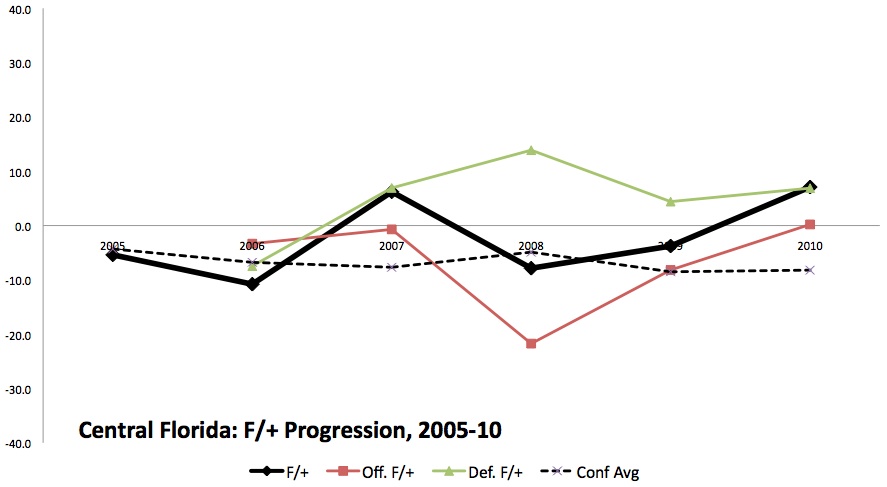 Recruiting is picking up (their 2011 class ranked 39th according to Rivals, highest of any mid-major team excluding TCU, who won't be a mid-major for long) ... there's a potential star at quarterback and an offensive coordinator who seems to get him ... there are plenty of tools with which a defensive guy like O'Leary can work ... of this year's projected starters, 17 are underclassmen and could be returning starters next year.  Things really are taking shape here.  One has to figure UCF is on the Big East's radar, and with the program that O'Leary is building, there's nothing saying they won't be in position to compete immediately if they do get the call.

...I do get the sneaking suspicion that UCF might be in for a slight step backwards this season.  If the new-look receiving corps cannot quickly find its way, then teams will find themselves more capable of focusing on and containing UCF's impressive run game.  The slide would be subtle; second-and-5's turn into second-and-7's, third-and-3's turn into third-and-5's, and at the end of the season, people are trying to figure out why Godfrey suffered a sophomore slump.  UCF's YPP margin was eighth-lowest in the country, meaning their efficiency (and their opponents' inefficiency) was perhaps unsustainable, and a regression in both efficiency and luck could be occurring soon.  In all, I am a lot more confident in UCF's two-, three-, and five-year prospects than I am in their ability to win a second straight Conference USA title this year.  It's quite possible that FO projections give them the nod, but I'm almost leaning toward Southern Miss in the CUSA East.

Then again, maybe Godfrey doesn't need protection from the play-calling anymore, and maybe he's about to unleash utter hell on the conference (and FIU, BYU and Boston College in non-conference).  I've certainly been wrong before...