Summer Vacation: The Florida International Golden Panthers and the Best Trip to Detroit ... Ever!

Share All sharing options for: Summer Vacation: The Florida International Golden Panthers and the Best Trip to Detroit ... Ever!

And with this, we are officially done with one conference! Now you hopefully know more about the Sun Belt Conference than you ever intended or wanted to know.  Confused? Don't miss the definitions and footnotes at the bottom.

Yes, it was just Toledo.  And yes, it was just the Little Caesars Pizza! Pizza! Bowl.  But this was a really, really big deal.  In late-2007, Florida International was mired in a rather incredible 23-game losing streak.  Just three years later, they came back from a 24-7 deficit against Toledo in the Motor City, scratched ahead, then fell behind one more time.  With 50 seconds remaining, they faced a fourth-and-17 from their 41; no worries.  One hook-and-ladder and exactly 17 yards later, they were still alive.  With four seconds left, kicker Jack Griffin booted a 34-yard field goal through the uprights for perhaps the most meaningful Formerly Known As The Motor City Bowl win ever.

Actually, I'll stop there and simply cede the floor to the great Bruce Feldman.

Just four years ago, when Cristobal got the job, FIU was winless. No program at the FBS level has had to overcome more. The program was in complete disarray when he arrived. I have been down to visit FIU before Cristobal arrived and after. There was no weight room, no meeting rooms, no film setup. It was unlike any Division I program I'd ever seen. This is a program that has still had just one offseason in a weight room since Cristobal has been at FIU. Many of the players had to work out on a bow-flex machine in some makeshift room. Players often had to sit on the floor of coaches' offices for position meetings.

Worse still, right when Cristobal took over the program, it had to absorb almost 30 lost scholarships in three and a half years.

All Cristobal had to sell was a vision and opportunity. There is no coach in college football who works harder, and, as for many of his peers at the Sun Belt and MAC level, much of it has been out of the spotlight. Not just in recruiting but also in community outreach in hopes of building a base.

You'd have to be pretty cynical not to have felt for those players as you watched the postgame celebration. In the midst of all of it, Greg Ellingson, a senior from Tampa and one of those FIU players who was there in the darkest days back in 2007, ran around shaking fans' hands and thanking them for coming.

Of course, there were thousands of empty seats, but for a program without an identity, the second half of Sunday night's game was quite a commercial. 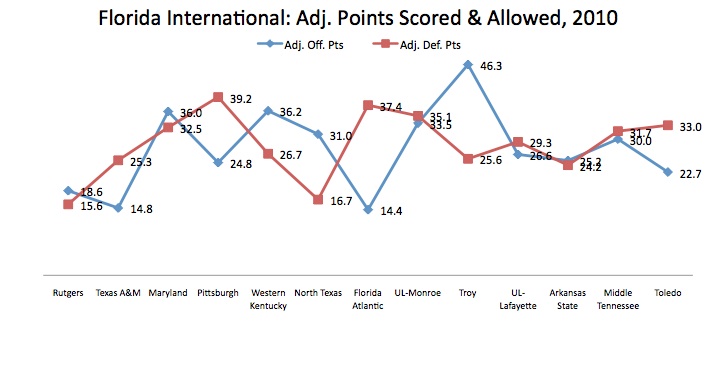 Florida International's 2010 season shows rather clearly how Adj. Score tells a completely different story than actual score.  In real life, FIU started 0-4, with losses to four difference BCS conference teams.  They then plowed out a 6-2 record in conference play to win a share of their first Sun Belt title and clinch a bowl bid.  Adj. Score, however, shows that they earned a good portion of their solid F/+ ranking of 66th in the opening month of the season.  They played well enough to beat average teams in four of their first six games (while they were going 2-4), then played rather average ball down the stretch (while going 5-2).  Their bowl performance was one of their worst of the year, but they figured out a way to gut out a win regardless. 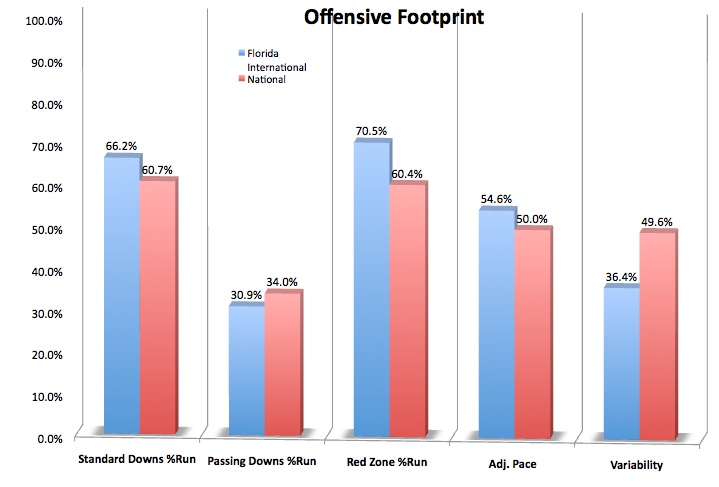 Florida International's 2010 offense was based in old-school principles.  Run on standard downs, pass on passing downs, run in the red zone, and don't stray from the script too often.  FIU was efficient on standard downs and played for big plays (and lower efficiency) on passing downs, and they put together one of the more well-rounded mid-major offenses in the country.  Their only major weakness, really, was passing downs efficiency -- their disproportional number of passing downs passes put a lot of pressure on both quarterback Wes Carroll and his stat line (2,623 yards, 62% completion rate, 7.1 yards per pass, 16 TD, 14 INT).  Otherwise, they were stellar (for a mid-major team) across the board.

Most of the major components from this stellar offense return in 2011.  Carroll's back, as is defending Sun Belt player of the year T.Y. Hilton.  In three years, Hilton has racked up 2,867 rushing and receiving yards, and 28 rushing, receiving and return touchdowns.  He is the definition of an all-purpose threat.  Somehow Cristobal convinced him to stay home instead of following offers to West Virginia or Ole Miss; he may have just been a little 5'10, 160-pound, two-star hometown recruit, but he has done more than any player to build the FIU program.  Recruiting changes your program, even if you really don't know in advance who's going to do the changing. 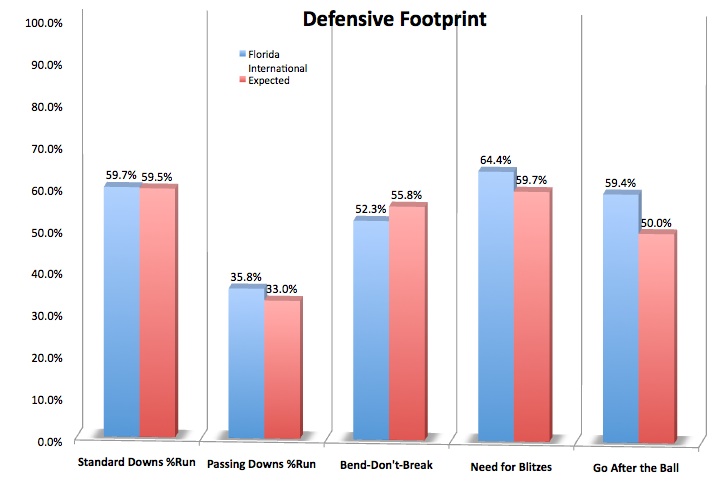 In 2010, the FIU offense caught up to the D, but the D still held its own.  Like the offense, they were based in old-school philosophy.  Play it straight and conservative on standard downs, then attack on passing downs.  They got a little too conservative, a little too friendly, on standard downs, and it resulted in quite a few big plays on first downs.  But if they got you where they wanted you on third down, they closed the deal.  Rarely will you see down-to-down splits like the ones above.  FIU had one of the worse first-down defenses in the country ... and one of the better second- and third-down defenses.  It gives you the impression that they were far too predictable early on, then got creative when they felt the opportunity to attack.

Pass D was a strength in 2010, but it will take a little work not to fall back a bit in that regard.  Cristobal and wonderfully named defensive coordinator Todd Orlando must replace two stars in the secondary -- all-conference draft prospect Anthony Gaitor (44.5 tackles, 8.5 TFL/sacks, 2 INT, 5 PBU) and strong safety Ashlyn Parker (53.5 tackles, 2 FF, 2 INT) -- and their best all-around pass rusher, all-conference end Jarvis Wilson (34.0 tackles, 15.0 TFL/sacks, 2 FF, 2 INT.  While that might not hurt them much on standard downs (clearly those three didn't help a ton last year), it might make it tougher for the D to bail itself out on passing downs.

While expectations might start to build in the future, the thought of a simple bowl bid (and win) probably seemed like an impossible dream for FIU not too long ago.  So since I'm determined to make reference to every song on my iPod in this series, let's make another list ... ten great songs with "dream" in the title (most of which, by the way, are not happy, dreamy songs).

It really was rare to see a defense so bad on first downs and so good on third downs.

For whatever it's worth to you, six of eight pre-2010 defenses on that list saw their Def. S&P+ ranking improve by double digits the next year.  If FIU can do that without Wilson, Gaitor, Parker and T. Smith, more power to them. 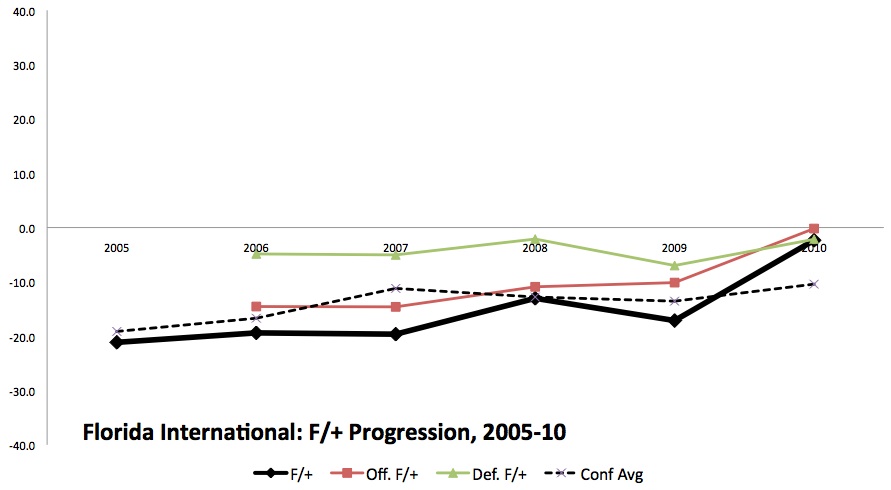 In general, F/+ projections are pre-disposed to predicting a drop-off the year after a surge.  A team's four-year history is as good a predictor of future success as last year's numbers, and to be sure, FIU still has a ways to go when it comes to sustaining the success they built.  There are obviously some positive signs here -- their recruiting averages place them in the upper half of the Sun Belt when it comes to their base of talent (being based in Miami, there really isn't an excuse not to be in the upper half of the Sun Belt in this regard), their turnover margin actually suggests they were a tad unlucky when it comes to recovering fumbles last year, and they return a very healthy amount of starters.  Because of four-year history, it is relatively certain that Troy will be projected as the stronger team this year, but there's certainly a lot to like about both FIU and the job Mario Cristobal continues to do.

And really, there's a lot to like about the Sun Belt as a whole. Sure, they're still the weakest overall conference (we're speaking relatively here, after all), but the depth is infinitely more impressive than it was a few years ago.  Troy is still Troy, FIU is surging, Middle Tennessee has built a level of sustained success, Arkansas State has an intriguing offense, UL-Monroe is perfectly executing underdog strategies, Western Kentucky is recruiting well, North Texas has a solid coach and probably the best facilities in the conference.  Granted, Florida Atlantic is spinning its wheels right now, and UL-Lafayette is still a year or two away from potentially gaining traction, but this is the most the Sun Belt has had going for it in a while, and as long as the coaching roster remains intact, a lot of the growth seems rather sustainable.