Actually, I should have saved this write-up for a Saturday.  What I Love: That Howard Schnellenberger is still around.  He's 77 years old, and the "Schnellenberger to retire?" rumors gain a little more steam each winter.  But his mustache is still -- and will always be -- glorious, he is the only coach Florida Atlantic has ever known (he almost literally built the program with his bare hands), he brought the Owls to a bowl in just their second season at the FBS level, and he is indeed still chugging along. 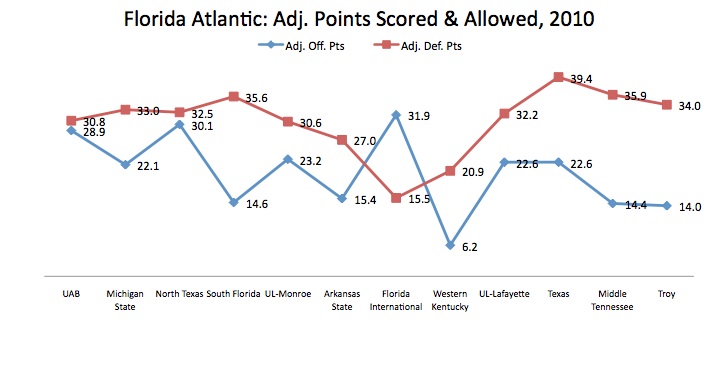 While Schnellenberger may still be around, it looks like he might need to find his second (eighth?  Twenty-seventh?) wind to restore FAU to the heights they established a few years ago.  The Owls regressed in the win column for the third straight year in 2010 -- from eight wins in 2007, to seven in 2008, to five in 2009, to four.  Things started on a decent path -- FAU knocked off what turned out to at least be a decent UAB team, then suffered competitive losses to Michigan State and North Texas (if there were such a thing as a "competitive loss" to Todd Dodge and the Mean Green, anyway).  Aside from a surprisingly strong rivalry game performance against the best Florida International team ever, though, it was one long downhill slide for the offense.  As defenses figured out that Atlantic ran the ball worse than Miami Northwestern High School (and this might not be an exaggeration), the going got rough.

The defense, meanwhile, allowed the national average of 27 Adj. Points or better three times -- all in a three-week slice late in October.  For the season, they were rather consistently a touchdown or so below average.  This alone would not be a deal-breaker, but with a tumbling offense, "below-average" just wasn't going to cut it. 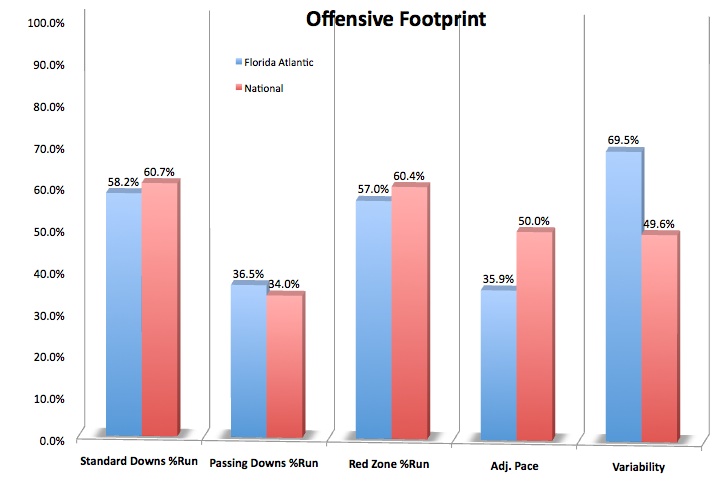 Well, we can say this much for sure: this year's Florida Atlantic offense is not going to look much like last year's.  For an offense that ranked 103rd or worse in five of the six categories above, that is not necessarily a bad thing.  With a new cast of characters, what's going to happen ... they're going to be worse than 118th rushing, 119th in the red zone and 106th overall?  It's technically possible, but the difference between FAU's 2010 perch and dead last is not that stark.

The change starts behind center.  Jeff Van Camp (2,459 yards, 7.3/pass, 57.3% completion rate, 17 TD, 13 INT) departs after what was, all things considered, a rather solid season.  Accomplishing what he did with one of the worst ground games in the country was admirable, even if the completion rate was not where you'd like to see it.  With Van Camp go his three top targets.  Lester Jean, Avery Holley and tight end Rob Housler combined for 1,911 receiving yards, 13 touchdowns, and 66.3% of all targets last season; I'm not sure there's a team in the country returning a lower percentage of its targets than FAU.  Run-catch threat Willie Floyd (256 rushing yards, 141 receiving yards, 2 TD) is gone too.

So what's left?  Nine members of the offensive line two-deep, for starters.  FAU's line was ravaged by injury last year (only one starter played all 12 games), which meant bad things in 2010 (103rd in Adj. Sack Rate, 118th in Adj. Line Yards) but could hint at better things soon.  When you are breaking in a completely new passing game, there are worse things in the world than having a savvy, experienced line for protection.

With Van Camp gone, it appears to be a four-way battle for the starting job.  Last year's backup, David Kooi, has to be considered a favorite, but it appears that Graham Wilbert, Nick Bracewell and Stephen Curtis are all being given an opportunity to impress Coach Mustache.  For what it's worth, it appears Wilbert has been doing rather well this spring. 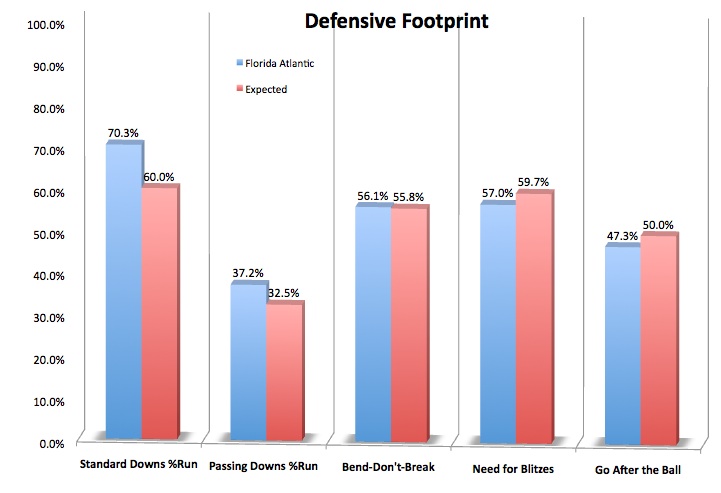 From the information above, one thing should quickly stand out: opponents felt really, really comfortable with the idea of running the ball against FAU.  On a per-play basis, the Owls' run defense really didn't seem any worse than their pass defense, but when you can get six yards per play on first down, why would you choose something different?

From a "bad mid-major defense" perspective, FAU's was not particularly vulnerable to the big play, especially against the run.  Theirs was a problem of efficiency.  To address this issue, Schnellenberger decided to make a change.  In 2011, FAU will be lining up in a 3-4.  Honestly, the timing for this isn't bad.  Returning end Cory Henry (8.5 TFL/sacks) seems rather well-suited to OLB at just 238 pounds.  Meanwhile, at 6'4, 275 pounds, fellow end Kevin Cyrille (6.5 TFL/sacks) seems potentially capable of withstanding the extra pressure associated with being the single true end on the line.

As always, moving to a 3-4 puts pressure on potentially undersized tackles to not crumple taking on more blockers; at 290 pounds, stumpy Jimmy Jean might be up for the challenge, however.  The other tackle/end spot looks to be manned by 6'4, 275-pound Kevin Cyrille.  Whether Andrew Stryffeler (last seen as a 245-pound freshman end last fall), or whoever wins the other tackle spot, can too ... that remains to be seen.

Because the run game killed both FAU's offense and defense, and because the iPod is overflowing with songs including the word "run" in the title...

And yes, "Born to Run" was just too damn obvious.  So was "Long Train Runnin'," for that matter.

I'm still sorting through all of the targets-and-catches data I received from Marty of cfbstats.com a while back, but as you've perhaps noticed in the last couple of profiles, I'm slowly incorporating the data into these pieces.  One thing you notice rather quickly: few players are the targets of over 30% of a quarterback's (or quarterbacks') passes (completions and incompletions).  FAU's Lester Jean, however, was. 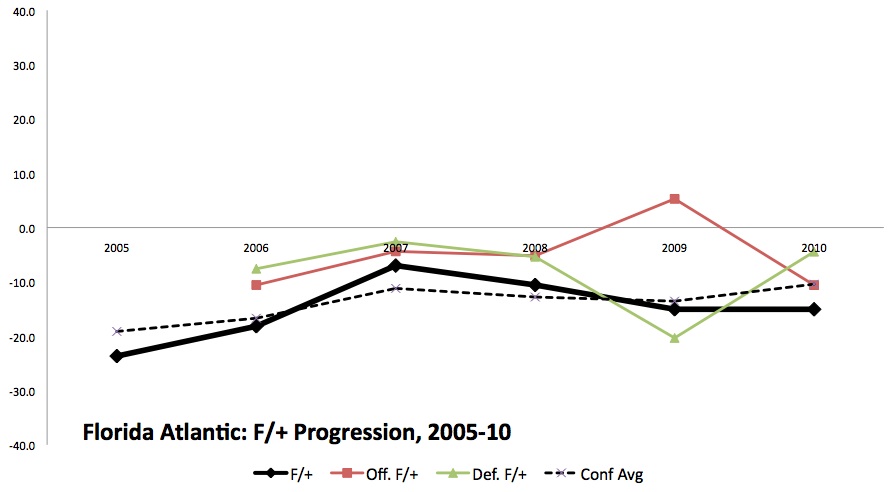 No matter my admiration for weird old Coach Schnellenberger, it's hard to be too tremendously optimistic about Florida Atlantic's prospects in 2011.  Their YPP margin shows they were quite unlucky, and it's possible that the 3-4 could lead to a few more turnovers along the way, but with a passing game completely starting from scratch and a run game that was dreadful in 2010, one can only see minimal improvement (if any at all) on that side of the ball.  That puts a lot of pressure on a defense that is learning a new scheme.

It appears that FAU has a few solid athletes around which they can build -- Cory Henry, DeAndre Richardson, etc. -- but in an ever-improving Sun Belt conference, where Florida International is surging, Arkansas State is explosive, Troy is Troy, and even the UL-Monroe's of the world might be getting their stuff together, it's unlikely that FAU has enough in the tank to make too much of a run this year.

Uh oh ... I think I just underestimated Coach Schnellenberger.  Pencil them into the New Orleans Bowl.