Summer Vacation: The Troy Trojans, Jim Croce and a Celebration

Share All sharing options for: Summer Vacation: The Troy Trojans, Jim Croce and a Celebration

For obvious reasons, we tend to focus on the more outlandish, easy-to-debate pieces of college football.  Paying players, playoffs, etc.  Things about which people can argue.  That wears me out after a while.  As you see every Saturday morning with the "What I Love" series, I like to step back and admire as much as possible, remind myself why it's okay to love such a silly, often ridiculous sport.  And there are so many things to celebrate about college football.

Larry Blakeney, for instance.  He just celebrated 20 years as Troy's head coach.  When he took over the Trojans, they were a Division II independent.  He helped to transition them to the 1-AA level and won three Southland Conference titles, making the 1-AA playoffs seven times in their nine years at the level (and in the first year, they went 10-1 but weren't eligible for the playoffs).

After less than a decade at 1-AA, Blakeney helped to transition the Trojans to the 1-A level ... and he has won or shared five consecutive Sun Belt titles.  Despite all the transition, despite all the movement, Blakeney has won 161 games, including at least eight in each of the last five years.

To put it another way, Blakeney won the All-American Football Foundation's Johnny Vaught Lifetime Achievement Award in 2000 ... before he had even accomplished anything at the 1-A/FBS level.  Since then, he's one-upped himself.

Blakeney is a tireless recruiter and brilliant representative of this small school in southern Alabama.  (That he has one of the most beautiful Southern drawls imaginable is just a bonus.)  He has won games, he has produced 18 NFL draft picks in his 20 years (four in the first or second round), and now he has potentially his most talented offensive player lining up for him for another two to three seasons.  There is a lot to celebrate about Blakeney's career, one that has not even begun to approach the homestretch yet. 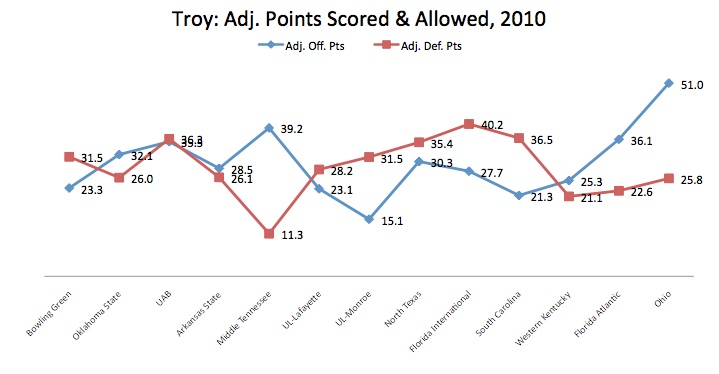 In 2010, Blakeney and the Trojans got to experience life with an ultra-talented, redshirt freshman quarterback.  Corey Robinson took the reins, and Troy demonstrated as much offensive upside as they ever had ... while experiencing some extreme ups and downs along the way.  Over their first five games, Troy averaged 31.7 Adj. Points per game, one of the highest mid-major totals in the country.  Then, over the next five games, 23.5.  The final three?  37.5.  The defense, meanwhile, seemed to surge and slump at the same times.  In that mid-season, five-game slump, they allowed 34.4 Adj. Points per contest; in the other eight games, they allowed just 25.1, an above-average total.  The defense returns a majority of its playmakers (and, to be fair, those who allowed quite a few big plays) in 2011, but Robinson will have to quickly get comfortable with a new set of receivers if they are to stabilize -- in a good way -- this fall. 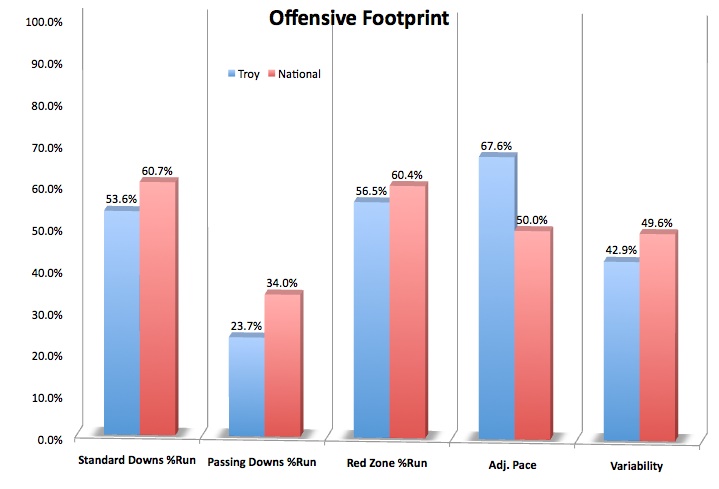 Luckily for Robinson, Troy passed a lot, meaning he still had time to get familiar with other targets while throwing 255 passes in the direction of Jernigan, Bruce and Gill.  Chip Reeves (515 yards, 17.2/catch, 11.7/target) now gets to understand life as the focus of opponents' No. 1 cornerbacks now, but he showed incredible potential last season.  Plus, Jamel Johnson (254 yards, 6.5/target), Corey Johnson and B.J. Chitty have all taken turns in the spotlight this spring.  There is still a lot to like here, but replacing Jernigan in particular -- I swear that guy was at Troy for 13 years -- still makes you worry a bit. 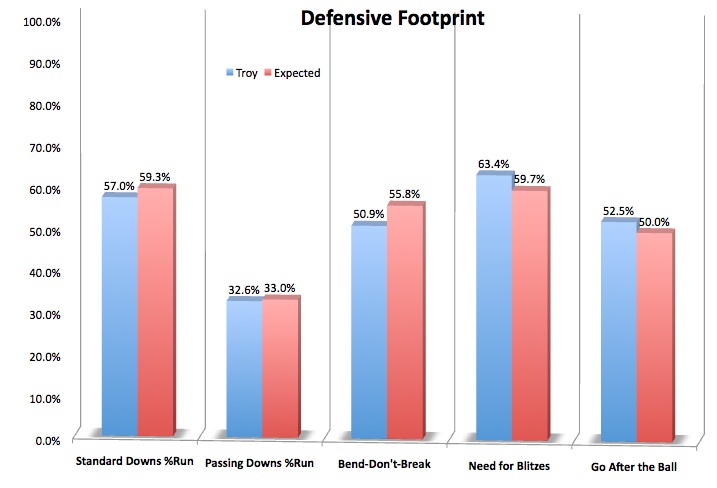 It doesn't take long to spot Troy's defensive weakness, does it?  The Trojans piled up the tackles for loss last season and attacked with great efficiency on passing downs ... but as with many mid-major defenses, they gave up far too many big plays.  The school that produced DeMarcus Ware and Osi Umenyiora could still get after the quarterback and make plays behind the line of scrimmage, but they wasted a good portion of the opportunities they created for themselves.

Honestly, it seems a lot of Troy's issues started in the middle.  Poor PPP+ ratings suggest problems with overall team speed, and that's probably relatively accurate, but with a line that had poor Adj. Line Yardage totals, the problems seemed to go beyond simply speed.  For all the TFL's this team rang up, the six tackles on last year's three-deep combined for just 9.0.  Almost every tackle returns this season, including medical redshirt recipient Emmanuel Dudley (23.5 tackles, 2.5 TFL/sacks). Maybe experience will do them some good there.

If the tackles can alleviate a bit of the pressure placed on Xavier Lamb (68.0 tackles, 7.5 TFL/sacks, 2 FR, 4 PBU), the overall engine might run a little more smoothly.  Lord knows they've got the pass rush thing figured out.  Defensive end Jonathan Massaquoi was just disgusting in 2010 -- 62.5 tackles, 20.5 TFL/sacks, 3 FR, no-brainer first-team all-conference.  He loses partner-in-crime Mario Addison (41.0 tackles, 15.5 TFL/sacks, second-team all-conference), but he's still a beast.  How Blakeney continues to churn out ends of this caliber is mind-bloggling.

This has almost nothing to do with Troy, but since we're in a celebratory mood, I'm seizing the opportunity to celebrate Jim Croce as well.  How?  In honor of Troy's fifth consecutive solo or shared conference title, I give you Croce's "Five Short Minutes," easily the best early-1970s song about under-aged groupies, plaster casters and consequences.  (A bold statement, I know.)

That Blakeney not only broke through for a couple of conference titles with Troy, but built them into a consistent winner, is amazing, even for the Sun Belt Conference.  Dealing with a budget less than half of those of other mid-major powers, Blakeney and Troy have produced results.  Below are the top ten mid-major programs over the last four years, according to F/+; in parentheses are a team's four-year F/+ average, national rank and, if available from this database, their total operating expenses for the 2009-10 academic year.  (No private school data.) 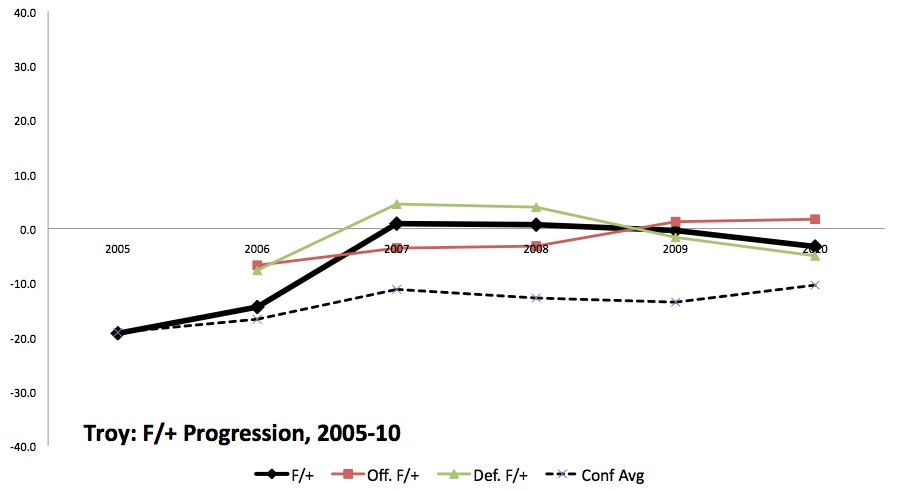 With potential steps backward in the receiving corps and on the offensive line, I'm not sure this will be Blakeney's best team in Troy.  But I also don't bet on streaks; if a team wins or shares five straight conference titles, it's probably smart to bet on them to continue until they give you a reason not to.  (See also: Kansas Basketball.)  In Robinson, Reeves, Southward and others, there is still infinite potential on the offensive side of the ball, and experience should at least make a dent in last year's poorer-than-average defensive showing.

This is a fun, dangerous and entertaining team.  While they might not have enough to take down Clemson or Arkansas in the opening weeks of the season, here's to betting they at least come close against one or the other.  And it's a pretty good bet that the October 25 Troy-FIU game on ESPN2 will be for the Sun Belt title.