In 15 years at the FBS/1A level, UAB has won five games seven times. They've won less than four or more than six just four times.  They have been the epitome of consistency ... and they've been to just one bowl game in their FBS existence, a forgettable 2004 trip to the Hawaii Bowl.  Head coach Neil Callaway took over for Watson Brown following the 2006 season, and he has re-established UAB's typical level of play; the Blazers have won four, five and four games the last three years.  Granted, last year's was probably the most entertaining and unpredictable four-win season of the bunch, but is there any reason to think a break from the trend is going to come about anytime soon?

The record may have been a bit boring, but nothing else about UAB's 2010 season was.  The Blazers were two plays from 2-10 -- they won via Hail Mary against Troy*, then went for two to beat Southern Miss in overtime.  However, they were also two plays from 6-6 -- they had a last-second, chip-shot field goal blocked against Florida Atlantic, and they lost in double-overtime at Tennessee.  If you're scoring at home, that's four crazy endings in the first eight games of the year.  Throw in tight losses to Mississippi State and Rice, and you've got a picture of a season that could have gone to extremes in either direction ... and a season that probably took about 15 years off of the lives of both Neil Callaway and Blazer fans.

Despite the drama, the Adj. Scores paint a picture of a 4-8 team ... that played like a 4-8 team.  The offense faded late in the season, the defense was rather consistently below average, the special teams were semi-brutal, and the Blazers earned a familiar record the hard way.

* Simply focusing on the Hail Mary does not do the Troy win justice.  They were down 23-0 early on; plus, their game-winning drive started at about the one-foot line. 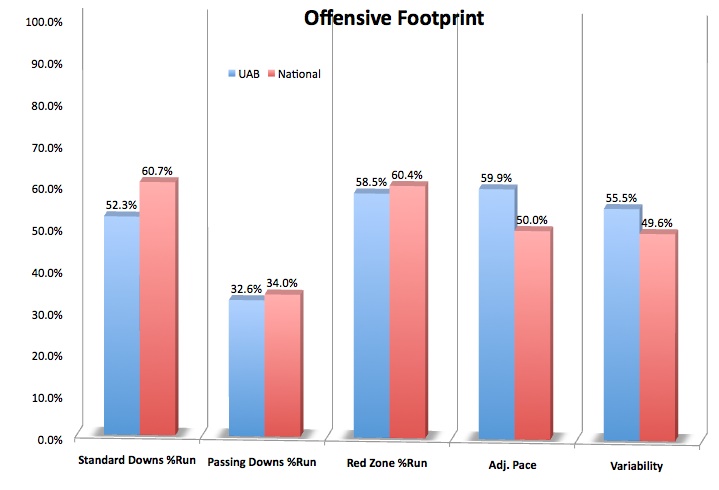 UAB had an awkward quarterback arrangement early on in 2010.  David Isabelle was a crazy run threat early on, posting 214 yards in the opening weekend.  But he couldn't complete a pass to save his life (46% completion rate for the year), so Callaway brought Bryan Ellis in on passing downs.  The high proportion of passing downs passes for Ellis brought about some pretty completion rates for him too (56%), but with receivers running aggressive routes (low catch rate, high yards per catch), he made some things happen regardless (2,940 yards, 25 TD, 12 INT).  (The constant quarterback changes inevitably resulted in a high rate of Variability.)

The situation seemed to get clearer when Isabelle injured his hand against UTEP and was lost for most of the season; with Ellis running the show by his lonesome, UAB almost knocked off Mississippi State and did knock off Southern Miss.  But the O faded quite a bit down the stretch.

With receivers running aggressive routes, running back Pat Shed became a major dump-off weapon out of the backfield.  His rushing numbers -- 847 yards, 5.4/carry, 3 TD, -3.9 Adj. POE -- were decent, but he was one of the better receiving RBs in the country (471 yards, 73% catch rate, four touchdowns, 7.4 yards/target).  He was targeted on 15% of all UAB passes, which is one of the higher numbers you'll see for a running back.

UAB threw more and more on standard downs as the season unfolded; Ellis spread the love nearly equally to seven different receivers.  They played at a fast pace as well.

Though Isabelle was a neat weapon to have, clearly the style of offense UAB wants to run gives preference to more of an Ellis type of quarterback.  Isabelle saw the writing on the wall and transferred to Alabama A&M this offseason. 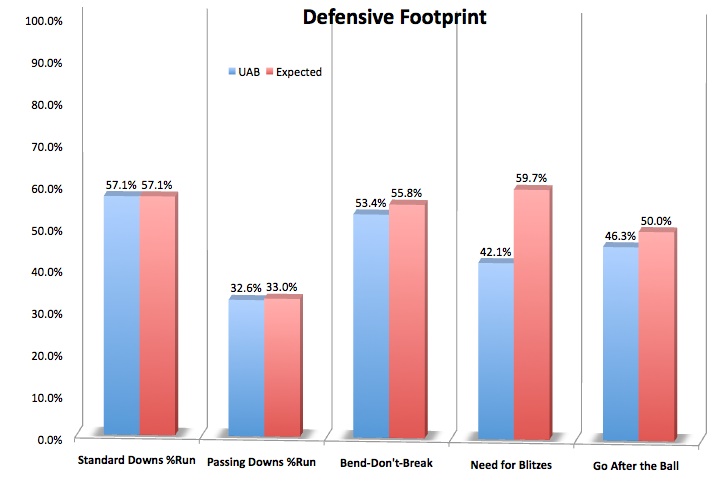 Sun Belt and Conference USA schools should expect large rushing totals in 2011.  Seemingly everybody returns a good running back, and seemingly everybody lost a majority of their defensive line this offseason.  Slight exaggeration, but still.  UAB's defense was stronger than their raw numbers suggest (they played a pretty impressive slate of offenses), and they procured a likely upgrade at the defensive coordinator position -- former Clemson and Memphis head coach Tommy West takes over; but they will have to overcome the loss of three starters and much of their depth on the line.

The losses on the line are significant when you look at UAB's strengths from last season.  End Bryant Turner (12.0 TFL/sacks among just 21.0 total tackles) was a lovely pass rush weapon (he was also non-existent against the run), and UAB generated strong Adj. Sack Rates without having to blitz much.  They do return second-team all-conference tackle Elliott Henigan (45.0 tackles, 15.5 TFL/sacks, 5 PBU), which is nice, but almost everybody else from the rotation is gone.  D.J. Reese, David DeCordova, Justin Wells and Elliott McGaskin combined for 13.0 TFL/sacks and must all be replaced.  With Henigan injured this spring, undersized tackles Deric Scott and Cody Payne each got long looks; they combined for 3.5 tackles last year.

How about a little "Drama" from RZA?  Living your life in peace sounds pretty good when all of your games cause heart attacks.

Granted, they get bonus points for just how close their games were, but UAB did not actually play the most games decided by eight points or less in 2010. 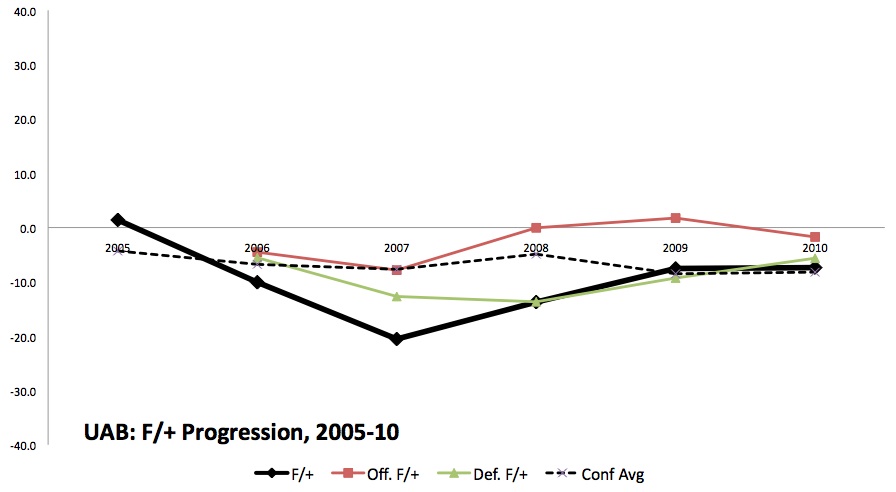 Their record has yet to reflect it, really, but Callaway has had UAB playing like a league-average Conference USA team over the last couple of years.  They have struggled with consistency -- a team that almost beats Mississippi State and Tennessee should be able to win at least one of three versus Florida Atlantic, Marshall and Rice -- but the pieces are coming together.

We'll see if they can avoid a complete crater in the run defense with the turnover on the defensive line; if they do, there are plenty of interesting cogs.  Shed is a lovely run-catch threat, the receiving corps still seems semi-deep, and the back seven of the defense isn't bad.  With all the downfield passing, it will be hard for UAB to win turnover battles (though Ellis' 25-12 TD-to-INT ratio despite the downfield throws was encouraging), but the YPP margin suggests they're due for a good amount of luck, and the overall experience certainly seems to be in place.  Being a single touchdown better in 2010 would have resulted in eight or nine wins; can they improve that much despite the losses in the trenches?  And will improvement matter with a schedule that includes visits from Mississippi State, Central Florida and Southern Miss and their most winnable games (Marshall, Memphis, Florida Atlantic) on the road?