I'm not sure there's ever been a more consistently solid mid-major program than Southern Miss.  The last time they finished with a losing record (1993), current head coach Larry Fedora was just a couple of years removed from coaching at Garland (TX) High School, offensive coordinator Blake Anderson was plodding through the Masters in Sports Administration program at Eastern New Mexico, and this song was giving way to this song on the Billboard Hot 100.

Since Bobby Collins took over in Hattiesburg in 1975, Southern Miss has had five losing seasons.  Five!  Yet ... in those 36 seasons, they've only won ten games once.  They've won nine games six times, eight games three times, seven games 13 times, and six games seven times.  They've been to 17 bowl games (13 in the last 14 years), but none more lucrative than a handful of Liberty Bowls.  How in the world can a team be that consistently solid without either taking the next step up or falling apart?

No really, I'm asking you.  This is one of the most staggering, odd accomplishments in sports.  And in three years under Larry Fedora, the train has kept a-rolling with records of 7-6, 7-6 and 8-5.  The offense has gotten a little better, the defense has gotten a little worse, and the records have stayed about the same.  Not that fans have grown tired of the routine just yet -- Southern Miss set attendance records in both 2009 and 2010. 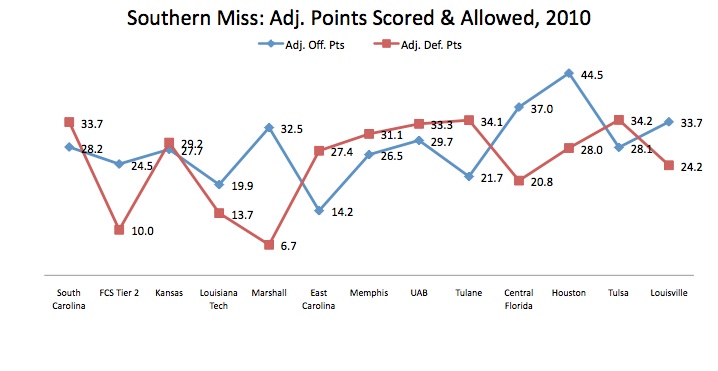 The 2010 season was one of what-ifs for Southern Miss.  (Probably not the first time, given their good-not-great history.)  After falling victim to Marcus Lattimore's debut against South Carolina, the USM defense stepped up quite a bit, allowing an average of just 15.1 Adj. Points per game over the next four weeks.  But starting with the East Carolina game, a trend emerged.  The Golden Eagles allowed 29.1 Adj. Points per game the rest of the way, allowing just enough big plays to lose by one point to East Carolina, one point to UAB, and six points to Tulsa.  Flip the two one-point losses, and Southern Miss is playing SMU in the Conference USA title game (they did, after all, handle division champion Central Florida by 10 points in Orlando) and winning double-digit games.  It was fitting, then, that a season with high standard deviation finished with a solid showing, and loss, in the Beef 'O' Brady's Bowl. 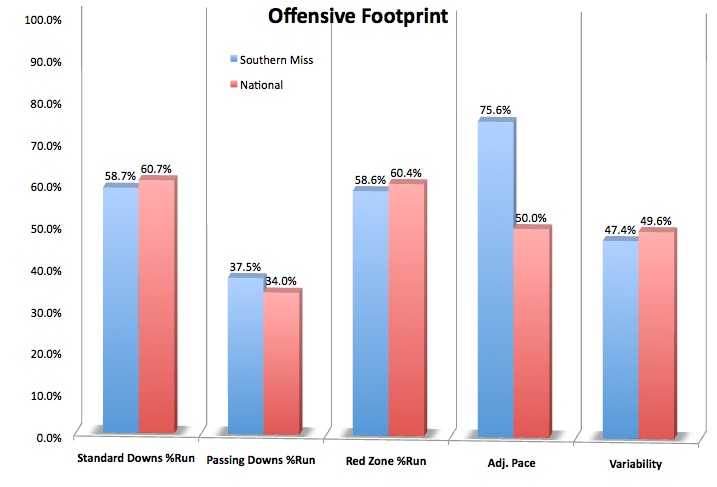 It is fitting, I guess, that a program that has been almost off-putting in their consistency would put together the most consistent set of rankings in the country last year.  Southern Miss ranked between 51st and 66th in each of the primary Success Rate+ categories (rushing, passing, standard downs, passing downs) and between 65th and 85th in each of the primary PPP+ categories.  They were exactly who they were at all times.

What "were" they?  A balance-to-the-extreme offense (they averaged 200+ yards both rushing and passing, just like Oklahoma State did when Fedora was Mike Gundy's offensive coordinator) that mixed powerful rushing from 217-pound freshman Kendrick Hardy (903 rush. yds, 6.5/carry, 7 TD, +10.5 Adj. POE as a redshirt freshman) with quick-strike, high-variety passing.  (How do you know it was a quick-strike attack?  Low sack rates + high success rates + low PPP = quick-strike.)

Aiming for balance is commendable but not always effective if your depth chart isn't properly balanced itself.  Not a problem for Southern Miss.  Hardy and Desmond Johnson (5'11, 195; 611 yards, 5.3/carry, 8 TD, +9.7 Adj. POE) formed a nice contrast in the backfield, and experienced quarterback Austin Davis found weapons of all shapes and sizes to target in the passing game.

Davis (3,103 passing yards, 7.0/pass, 63% completion rate, 20 TD, 6 INT; 452 rushing yards, +7.8 Adj. POE, 10 TD) was a wonderful run-pass (and catch) threat for Fedora and Anderson. He and Fedora begin their fourth season together this fall.  Despite missing a good portion of 2009 due to injury, Davis has racked up some stellar career stats -- 7,402 passing yards, 53 touchdowns, 16 interceptions.  He loses a couple of his primary weapons, but plenty of variety returns.

Okay, fine, I can't reference the play above without actually showing it.

First, let's talk about who departs.  Former five-star recruit DeAndre Brown leaped to the pros after his junior season, hoping to leave behind some terrible injury luck.  After a gruesome injury in the New Orleans Bowl in 2008, the 6'6, 240-pound Brown injured his leg again three games into the 2010 season.  He played in parts of six games and managed a decent stat line -- 284 yards, 14.9/catch, 9.8/target, 3 TD -- but his loss is tamped down by the simple fact that Southern Miss is used to playing without him.

There is plenty of experience coming back, however.  Skinny, 165-pound Kelvin Bolden was the closest thing Davis had to a go-to option, catching 46 passes for 722 yards (9.9/target, 15.7/catch) and 6 touchdowns.  He was an honorable-mention all-conference selection.  Possession threat Quentin Pierce (454 yards, 11.9/catch, 7.8/target) also returns. 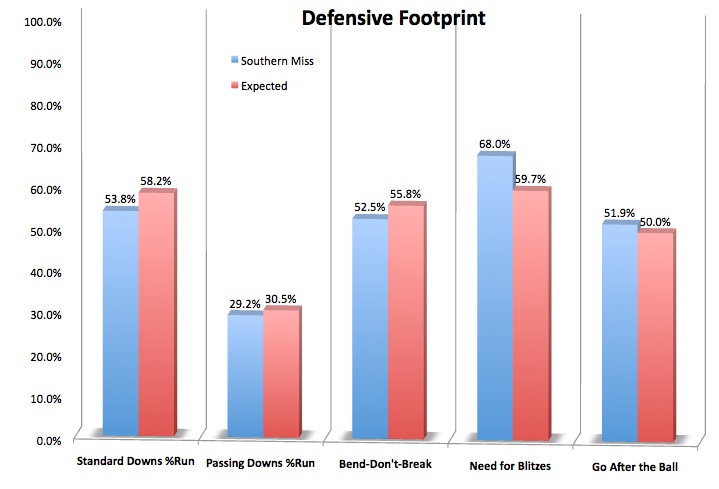 Look at the stat table above, and you can pretty quickly reach a basic conclusion: Southern Miss was physical, efficient, and crushed by big plays.  Give Larry Fedora credit, however -- he's not at all satisfied with 7-8 wins and only a decent defense.  This offseason, he brought in a new defensive coordinator, former Illinois assistant Dan Disch, and he's installing one of the more popular get-more-speed-on-the-field defensive formations: the 4-2-5.

In all, it's probably a good time for a change.  Southern Miss' strength was their interior defense, but they must replace both tackles Anthony Gray (31.0 tackles, 6.0 TFL/sacks, second-team all-conference) and John Henderson (25.0 tackles, 5.0 TFL/sacks, honorable mention all-conference.  Their replacements have quite a bit of potential -- Khyri Thornton and Terrance Pope combined for 11.0 TFL/sacks of their own -- but one still must at least prepare for a bit of interior drop-off.

The 4-2-5 is not an attacking defense so much as a swarming one.  It will put quite a bit of faith in ends Cordarro Law (38.0 tackles, 11.5 TFL/sacks, 4 FF, 2 FR, second-team all-conference) and Octavius Thomas (4.5 TFL/sacks as aredshirt freshman) to generate pressure on a passer by themselves, and it will force some new players in the secondary to come to the forefront.  All three linebackers return but will presumably have to squeeze into two spots (one has to figure MLB Korey Williams and his 14.5 TFL/sacks will lock down a starting role rather easily) while other, faster options emerge alongside free safety Kendrick Presley (57.0 tackles, 4.0 TFL/sacks, 3 PBU).

Is Aerosmith's "Same Old Song and Dance" too obvious?  Should I take advantage of the opportunity to just celebrate Bob Dylan's great "Mississippi" instead?  (As with all other Dylan songs, beware searching for them on YouTube. Lame-singer-songwriter-singing-covers-into-their-webcam alert.) 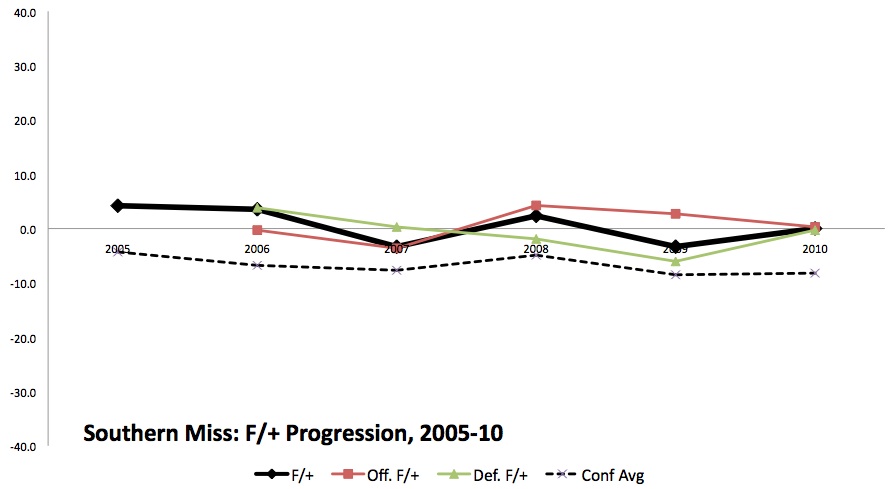 In a way, this is like saying the same thing about Clemson, but ... I really like this Southern Miss team's potential.  Any improvement in big-play prevention last year could have meant 10-11 wins, and with solid starters returning, a semi-maintainable turnover margin (because it was based on picks, not fumbles, and their pick-proof quarterback returns), a stellar recruiting average, and a young stud at running back, this team definitely has the tools to make a run at Central Florida for the CUSA crown.  It's almost boring to predict Southern Miss to just be pretty good -- at some point, you just have to figure they turn great or fall apart; of those two options, give me the former.  Southern Miss is closer to being great than terrible, and if they're ever going to break through in a big way, it's going to be in Davis' senior season.