It seemed like the timing was just right.  First under Jack Harbaugh, then under David Elson, Western Kentucky developed into a thriving FCS-level team at the turn of the century.  From 2000 to 2004, the Hilltoppers went 49-17, winning the FCS national title in 2002 with a pasting of McNeese State.  They quickly arranged for their move to the big-time, a jump to FBS and the Sun Belt conference.

In their provisional FBS year of 2007, it seemed the transition might be a smooth one.  They went 7-5, knocking off Middle Tennessee and cleaning the clocks of the FCS teams they were leaving behind.

Then they lost 33 of their next 35 games against FBS teams.  Elson was dumped after the 0-12 campaign of 2009, and his replacement, former Hilltopper star quarterback Willie Taggart, didn't immediately fare much better in terms of wins and losses.

More positive spin: they've only been a game behind North Texas in each of the last two years ... and the Mean Green have been at the FBS level much longer than they have!

Let's see ... what else ... their mascot is an awesome blob ... their campus is rather underrated and scenic ... they've usually got a good basketball team.  Plenty going for them.  But will their football team turn anything resembling a corner sometime soon?  If so, it probably starts in 2011.  As with a lot of bad teams, WKU returns quite a bit from last year's squad, and the young guys seem more talented than the older ones.

In terms of play-for-play quality, 2010 was WKU's best season since they joined FBS.  Everybody's got to start somewhere, right?  In Taggart's first season, the Hilltoppers saw their 33-game FBS losing streak come to an end in Lafayette, then they pulled another upset in Jonesboro.  Their long FBS home losing streak still persists, but ... had to save something for 2011, right?

So what did WKU do right against ULL and Arkansas State that they couldn't do most of the rest of the season?  Well, they won the turnover battle, for starters.  They plus-7 in TO Margin these two games ... and minus-four the rest of the year.  They were outgained by 60 and blew a two-touchdown lead against ASU before winning via daring two-point conversion in overtime; against ULL, they did something at least a little more repeatable: they passed well.

That's really about it.  No secret pathway to success here -- they just won two games because eventually you get some breaks and win games. 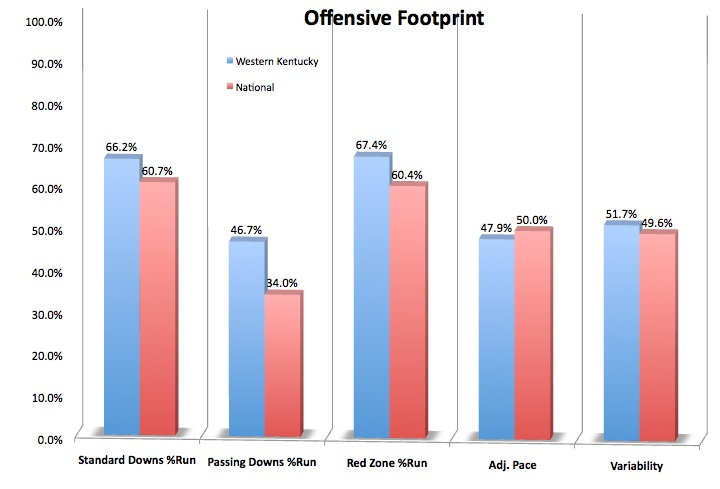 Bobby Rainey took an odd path to 1,650 rushing yards in 2010.  He put up an outstanding 155 yards (5.2 per carry) against Nebraska and 184 (8.4) against Kentucky.  He also gained just 3.4 yards per carry (94 total) against Florida International and 3.2 (67) against UL-Lafayette.  For the season, his Adj. POE numbers (minus-6.5) suggest he was a perfectly decent back whose biggest skill was perhaps his durability.

At 5-foot-7, 196 pounds, Rainey was surprisingly strong and resilient; he carried the ball at least 20 times in every game and at least 30 times in five games; he averaged 28 carries per contest.  Throw in 29 receptions, and that's almost 31 touches per game.  Ridiculous.  He was the mid-major Javon Ringer.

As with Ringer, there is certainly benefit to durability, but Rainey is not the elite kind of back who can carry a good offense.  He was not particularly explosive, but his work was the primary factor in WKU's standard downs success rates being rather average (which, for this team as a whole, was outstanding).  If you keep things close, then he can win it for you in the fourth quarter, but he simply had no help in 2010, and that will have to change. 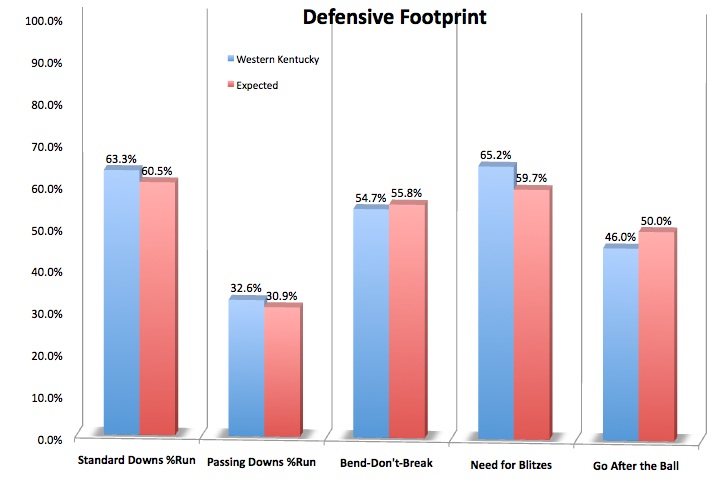 First, credit where it's due: when they were able to leverage teams into passing downs, Western Kentucky's defense was downright decent.  They blitzed, they attacked, and they made things happen.  The problem: they almost never forced passing downs.  And now two of their best non-line attackers are gone.

Western Kentucky returns almost its entire 2010 defense for another go-round in 2011, but they're missing all three linebackers.  Thomas Majors (82.0 tackles, 14.5 TFL/sacks) was one of the better mid-major linebackers, and Orlando Misaalefua (45.0 tackles, 6.5 TFL/sacks, 2 FR) wasn't so bad himself, at least in terms of making plays.  Willie Taggart and defensive coordinator Clint Bowen (who has since left to take the D.C. position at North Texas) knew how to finish opponents off when they had leveraged them into bad situations, but WKU's inability to make things happen from down to down devastated them.  Now it's Lance Guidry's turn to figure out how not to allow opponents eight yards on every first-and-ten.

If there's a silver lining to losing their linebackers, it is this: while Majors really was solid, it appears that the LBs overall were just as instrumental in WKU's sieve of a run defense as they were in creating a solid passing and passing downs defense.  The defensive line was nothing special, but you don't become the second-worst standard downs defense in the country just because of a bad line.  If the LB replacements are a little stiffer against the run, then they won't be relied upon as much to make plays later in downs.

Here's a list of every team (I think, unless I missed one) that has either entered or re-entered FBS since 1990, and their record versus fellow FBS teams in their first three seasons.  It is very difficult to succeed quickly at this level, but Western Kentucky still made the transition about as poorly as anybody ever has. 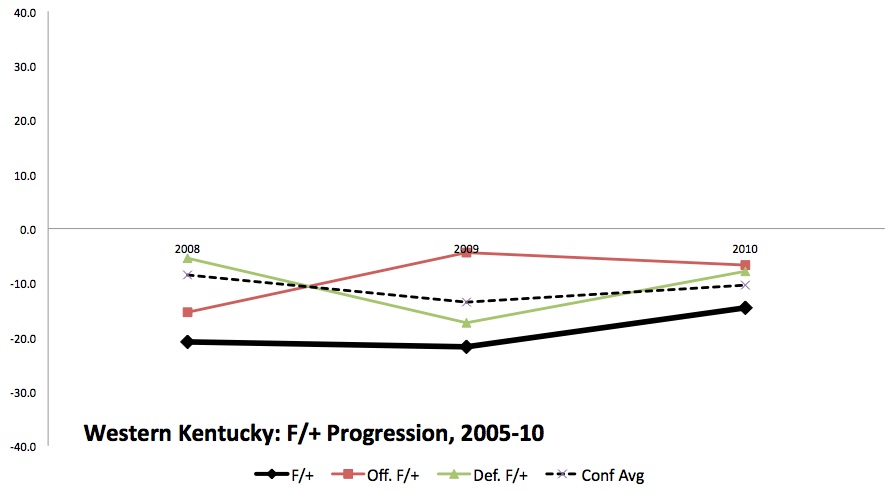 It's funny how bad teams always return so many starters, eh?  There seems to be a process where the experienced players on a bad offense/defense are overtaken by youngsters ... those youngsters might or might not be any better, but it's a fun cycle.  Western Kentucky returned 18 starters last year, and they return another 15 this time around.  With the way they've been recruiting the last couple of years, that might continue.  Their five year averages are still atrocious, obviously (they haven't been in FBS that long), but they've pulled in the Sun Belt's best recruiting class each of the last two years, and if the youngsters are good enough, they should be able to see plenty of action in the next couple of years.

When you start your FBS tenure this poorly, it might take a long time to move toward respectability.  But Taggart's first season in charge represented a clear step forward even if the win column barely changed.  Another step forward this year, and the Hilltoppers could at least move toward "Sun Belt league average" territory in 2011.