We started in Dallas, circled through Texas, weaved down toward the Gulf of Mexico, headed north to Jonesboro, then stopped for some Dyer's Burgers on Beale Street.  Now we move further into the state of Tennessee.  Somebody should make a map of this trek.  Confused?  Don't miss the definitions and footnotes at the bottom.

You've come a long way, Sun Belt Conference.  In 2010, the phenomenon known for a while in major conferences came to the SBC: the incredibly disappointing bowl season.  Middle Tennessee won their final seven games of 2009 (including the New Orleans Bowl) and went 10-3 overall.  With quite a bit of talent returning -- especially flashy run-pass quarterback Dwight Dasher -- the Blue Raiders were a popular choice to both win the Sun Belt and, in potential showcase games against Minnesota and Georgia Tech, make something of a national statement.

Instead, Dasher was suspended for four games -- not for four-digit gambling debts, but for borrowing money from an MTSU alum to cover said debts -- and was extremely hit-or-miss upon his return, and Middle Tennessee needed to win their final three games of the season just to return to bowl eligibility.  They did so, making their third bowl in five seasons (not a small feat for a school that began FBS play in 1999), and that alone should be commended.  But both Dasher and the Blue Raider defense regressed (for reasons that, in hindsight, make a lot more sense), and there's no getting around the fact that MTSU did not live up to expectations last fall.

So now the question: is Middle Tennessee better off without Dasher this season?  His backup was solid, and the circus surrounding his suspension could not have been good for either continuity or morale.  The offense returns quite a bit of intriguing talent in 2011, but that brings us to the next question: what the hell happened to the defense last year?  And is improvement possible with significant losses in the trenches?

The Blue Raiders probably cannot meet the expectations set for them last offseason, but they could at least be able to tread water and threaten for their third straight bowl game this fall.  And again ... that's not a minor accomplishment in an improving Sun Belt Conference. 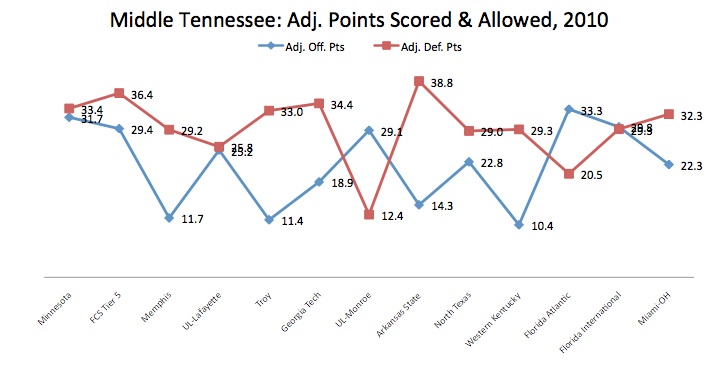 Something immediately bears mentioning: Middle Tennessee 'gained' 25.0 Adj. Points or more in six games last season -- three of four times with Logan Kilgore at quarterback and just three of nine times with Dasher (1550 yards, 57.8%, 6.2/pass, 6 TD, 18 INT; 543 rushing yds, +5.9 Adj. POE).  While the defense clearly did not help matters by allowing fewer than 25.0 Adj. Points just twice, the offense was crippled by spates of Dasher-related turnovers.  He was minus-two or worse in terms of TDs-to-INTs in four games, all losses -- minus-four against Georgia Tech and Miami (Ohio), minus-three against Arkansas State, and minus-two against lowly North Texas.  Average score in those four games: Opponents 38, MTSU 19.  Average score in the other nine games: MTSU 30, Opponents 24. 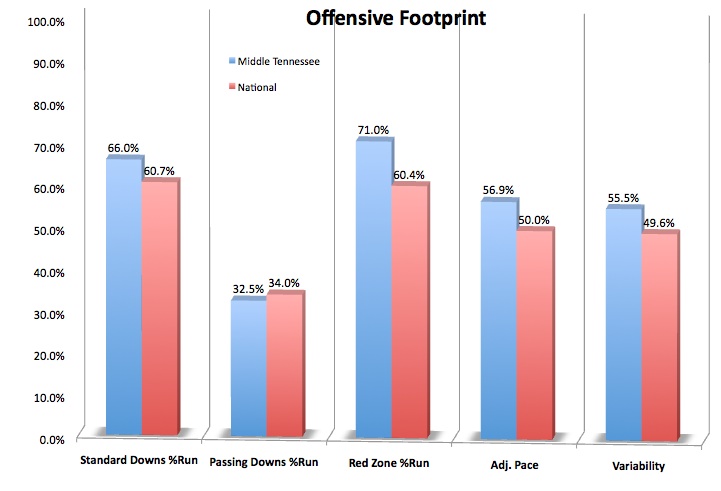 Due to both shifts in personnel and general schizophrenia, Middle Tennessee's offense was far from normal in 2010.  Their run-pass ratio was heavily run-oriented on standard downs, they ran less than normal on passing downs, and they were nearly all-run in the red zone (of course, it's hard to find fault in their red zone play-calling -- their Red Zone Rushing Success Rate+ was eighth in the country).  They played at a very high pace, for better or worse, and their variability was quite high.  Only once all season did they play back-to-back games at a reasonably high offensive level.

MTSU's efficiency left something to be desired overall in 2010, but despite Dasher's eventual presence, the Blue Raiders' primary problem was one of big plays: they didn't have many.  Running back Philip Tanner (928 yards, 5.8/carry, 13 TD, +16.1 Adj. POE; 194 rec. yds), who I think MTSU will miss much more than Dasher, was a solid, sturdy back, and he boosted MTSU's standard downs success rates to decent levels.  But he still wasn't a great big-play threat, and the receiving corps really presented no particular go-to option.

What changes for 2010?  Dasher, Tanner and possession receiver Garrett Andrews (377 yards, 11.1/catch, 2 TD) are gone, but there's hope.  Kilgore's back, and D.D. Kyles (414 rushing yards, 5.4/carry, 4 TD; +1.6 Adj. POE) is an intriguing option in the backfield.  They will benefit from the return of four offensive line starters (seven with starting experience).  The line wasn't great (their Adj. Sack Rate was likely assisted quite a bit by Dasher's elusiveness; when they blew a block, it was as likely to result in a pick as a sack), but it was decent for a Sun Belt line, and experience is experience. 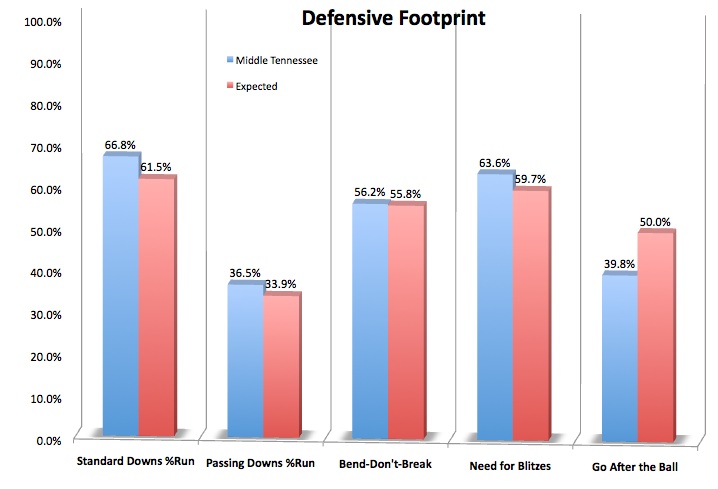 Perhaps because of this guy.

That, and the Blue Raiders did lose some key personnel.  Here's Paul Myerberg on MTSU's defense last summer:

It’s hard to ignore what Middle Tennessee has lost on the front seven: all-conference linemen Chris McCoy and Brandon Perry and linebackers Danny Carmichael and Cam Robinson. The Blue Raiders will rebuild on the fly, particularly at linebacker. Senior Antwan Davis returns on the strong side: he made 52 tackles last fall, fourth among returning defenders. However, outside of Davis, M.T.S.U. won’t have the luxury of experience at the position. Sophomore Justin Jones looks like the man at linebacker after his stellar rookie campaign, though he did not land a start a year ago. Middle Tennessee could also turn to junior Gorby Loreus, another of last season’s reserves, on the weak side.

It’s always difficult to replace linemen like McCoy and Perry, both of whom demanded constant attention from opposing offensive lines. I’m not sure if any of Middle Tennessee’s returning linemen will draw the same kind of attention, though senior Jamari Lattimore is certainly one of the top ends in the Sun Belt. The big question, of course, is what kind of production Lattimore puts forth while being the center of attention; there’s no question he benefited from Perry’s stature as one of the top interior performers in the conference a year ago.

At larger schools, you "move 'em up and move 'em over."  At Alabama, Nick Saban replaces NFL-caliber players with more NFL-caliber players.  At Middle Tennessee, however, the loss of a potentially NFL-caliber starter like Chris McCoy (drafted in the seventh round) can be significantly damaging.  Combine that with the loss of Diaz, and that might explain why Diaz' replacement, Randall McCray, lasted only one season in Murfreesboro before deciding that Safeties Coach and Special Teams Coordinator at Pittsburgh sounded like a pretty attractive gig.  Now head coach Rick Stockstill looks to another up-and-comer, Steve Ellis, to fix what clearly didn't get fixed last year.

In honor of Dasher, how about a little "Rambler, Gambler" by Bob Dylan (and hundreds of blues singers)?  I looked for a decent version on YouTube, but all I got were hundreds of lame covers by dudes with guitars in front of their computers.

(Seriously, don't do a YouTube search of this.  You'll feel sorry for yourself -- and them -- afterward.)

Fun fact: all six teams at the top of that list lost either their head coach or defensive coordinator (or both) before the season in which they fell off a cliff. 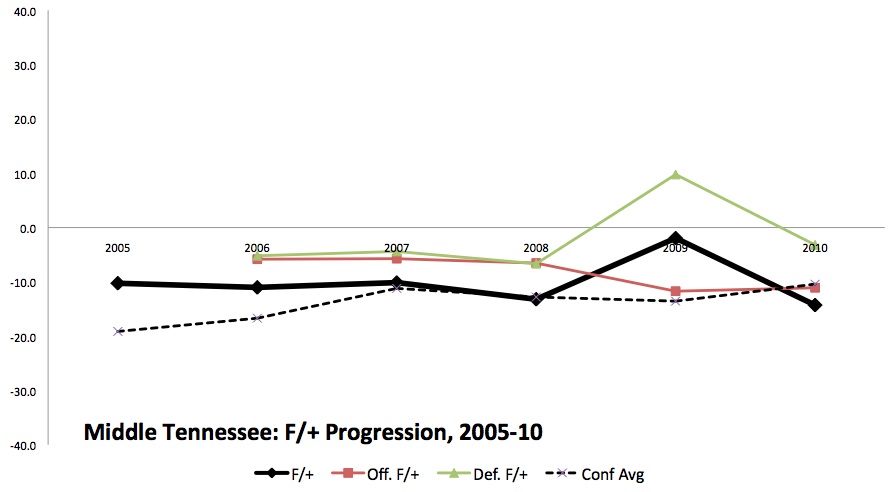 The good news: there is skill on offense, and there's almost no way in hell Kilgore will throw as many picks as Dasher over the course of the season, at least not without a lot more touchdowns as well.

The good news: MTSU has been near or above average for a Sun Belt team for four seasons now, and if they could survive (sort of -- they did still go bowling) the loss of Diaz in the coaching staff, they can survive the loss of players like Dwight Dasher and Jamari Lattimore on the field.

The bad news: three returning defensive starters! A completely rebuilt defensive line! And not much of a recruiting base from which to draw replacements.

Rick Stockstill is a good coach, and I think this is still a squad that can get to another bowl, but the ten-win season of 2009 might have been the highpoint for the Stockstill era.  Reaching those heights again might be difficult.