Summer Vacation: The Big East, the Filthy Diablo and the Memphis Tigers

Share All sharing options for: Summer Vacation: The Big East, the Filthy Diablo and the Memphis Tigers

Talk about bad timing.  EXPANSIONAPALOOZA™ got rolling last summer, the Big East is still potentially looking at expansion, and look!  Memphis is available!  Their basketball program is still on solid footing, they've got FedEx money at their disposal ... what could go wrong here?  Surely they're a strong candidate, right?

The Memphis football program has chosen a really bad time to crater.  The Tigers have won three games in two seasons, and in last season's finale against Central Florida, they drew all of 6,000 people.  (For the record, the announced attendance was 14,992, which still isn't good.)  In a 60K-capacity Liberty Bowl Stadium.  Ggh.

Also: the 2011 Memphis squad returns all of nine total starters (four on offense, five on defense) after a few semi-important players elected to flee the premises.  This is not necessarily a bad thing, I guess (recent recruiting has been solid), but it does suggest that UM is not in line for a quick turnaround in coach Larry Porter's second year in charge.

Make no mistake.  Memphis wants that Big East bid.  And with football potential, revenue and accomplishment driving the bus, it's probably not going to happen.  Not with 6,000-15,000 attending a home game (season average: 23,918).

And to add a brisk slap to the program's face, former C-USA member TCU accepted an invitation Monday to join the Big East, the Bowl Championship Series conference that the Tigers have pursued for more than five years. TCU, winners of 25 consecutive regular-season games, is No. 3 in the latest BCS rankings.

''Obviously, if our football was where TCU's is right now, (the Big East) would be taking us,'' athletic director R.C. Johnson said. ''I'm convinced of that.'' 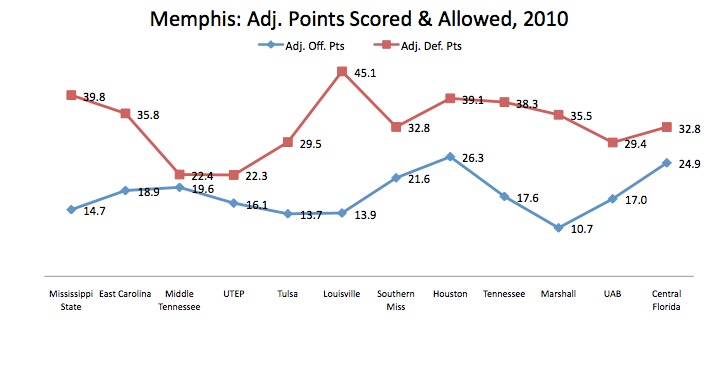 Fun story: in 1999, I made my first trip to Memphis (for a Mizzou-Memphis football game).  I barely remember anything about the game itself (other than the fact that Mizzou won, and I got an 18-pound turkey leg for about $4.50 at the stadium), but I do remember Beale Street afterward.  My friend and I weren't tremendously interested in drinking at the time, but we were interested in going to Dyer's Burgers.  I mean ... THEY'VE USED THE SAME GREASE FOR 100 YEARS.  When they moved to Beale Street, they transported the grease vat in an armored truck!  They drain the grease off the deep-fried burger ... with the bun.  Even my wife, for whom this would generally be considered a terrifying experience, was blown away by these burgers a few years later.

(And yes, there are deep fried twinkies on the menu.  Why do you ask?)

Anyway, my friend and I walk into Dyer's, order ourselves a tray of chili cheese fries, and ask our server about one of the items on the menu.  "What's a Filthy Diablo?"  "Well, it's named after a local band. It's basically a triple cheeseburger ... with two whole kielbasa sausages on it."  We winced ... and we ordered two damn Filthy Diablos with our chili cheese fries.  Though I didn't drink that night, my general Beale Street experience was extremely similar to others': I ended up leaning against a wall outside, trying to collect myself for a good, solid half an hour.

How unhealthy was the Filthy Diablo?  It's no longer even on the menu!  The Filthy Diablo: too unhealthy for even Amurrcans to eat.  Instead, to get your official harrowing Memphis experience, you now either have to drink it (in the form of a Diver) ... or you just have to have attended a 2010 Memphis Tigers football game.  There just isn't much good to say here.  The national average for Adj. Points (and real points) is around 27.0 ... and Memphis' offense came within five points of average just twice.  And they allowed fewer than average Adj. Points on defense just twice.  The closest they came to an adjusted win was in their only real win of the year, a tight, plus-four-turnover-aided win over Middle Tennessee.  They had one of the six worst offenses in the country and one of the 11 worst defenses.  They were poor in every way imaginable.

I love Memphis, for obvious, diablo-related reasons (and the fact that I've never not had a wonderful time in Memphis) -- and because of said love, I tend to indirectly root for UM to succeed -- but wow do the Tigers have a long way to go.  Not sure how they got here, but they're here. 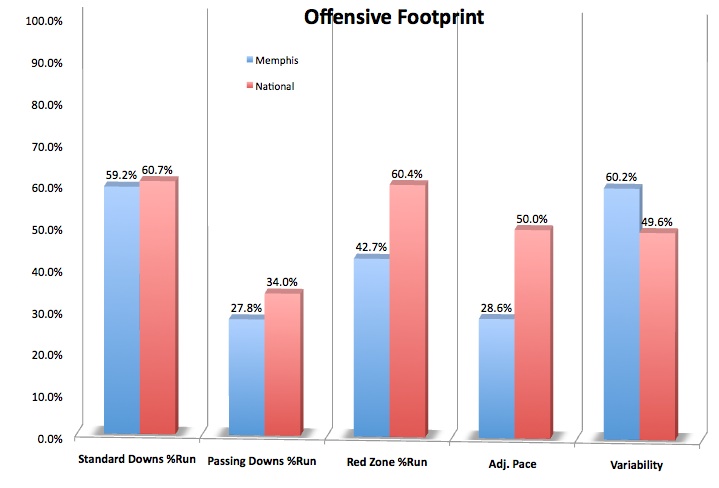 There are 27 categories of rankings in the above tables.  Memphis ranked better than 100th in two of them and better than 93rd in none.  Because of that alone, it's probably misleading to talk about any sort of exciting, accomplished player or unit -- nobody's accomplished on this offense.  Some guys started games, some guys got some carries, some guys attempted to make some blocks, some guys threw passes and some guys caught passes, but nobody really accomplished anything.  So when we look at UM's offense for 2011, it's all based on potential.  More specifically, does anybody have any?

A couple of people do, at least.  Okay, one does.  Receiver Marcus Rucker (6'4, 180; 704 receiving yards, 17.2 per catch, eight touchdowns) seems like a stellar, big-play talent.  He might (might) have a decent quarterback throwing him the ball too.  Andy Summerlin, a JUCO transfer who injured his shoulder at the beginning of spring practice last year and redshirted, looks like he will potentially replace last year's signal-calling duo of Ryan Williams (2,075 yards, 7.2 per pass, 57% completion rate, 13 TD, 10 INT as a freshman; announced that he was transferring this offseason) and Cannon Smith (FedEx heir who threw for 246 yards and is now a defensive back).

Beyond that?  Who knows?  Running back Jerrell Rhodes will likely replace Gregory Ray in the starting lineup; their lines -- 4.3 yards per carry for Ray, 4.0 for Rhodes; a bad minus-10.8 Adj. POE for Ray, an atrocious minus-14.1 Adj. POE for Rhodes -- are similar, but not in a good way.  Rhodes was just a true freshman last year, so he will likely improve, but it still doesn't appear that he is the heir to Deangelo Williams' throne. 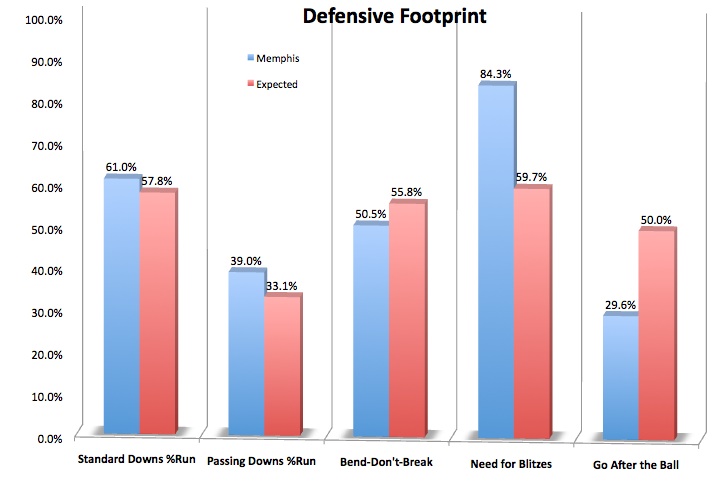 Compared to the offense, Memphis' defense is a source of great strength and excitement.  Led by a deep, big defensive line that stuffed the run relatively well (43rd in Adj. Line Yards), there is at least potential here, especially at tackle.

The interior of the line has to be considered the team's single biggest strength.  Frank Trotter (59.5 tackles, 16.5 TFL/sacks at end last year) moves inside; he's a little small (265 pounds) to be playing tackle, but thanks to his counterpart, Memphis' likely starting tackles still average about 308 pounds.  Why?  Because of man-mountain Dontari Poe (6'5, 350; 31.0 tackles, 6.5 TFL/sacks).  I've never seen Poe play, but he excites me.  Six or seven tackles for loss is decent for a tackle, and 31 tackles is tremendous for a man of Poe's size.

So Memphis has that going for them.  The ends that line up alongside Trotter and Poe should be decent too.  Dasmine Cathey (6.0 TFL/sacks) and Corey Jones (4.5 TFL/sacks) have shown glimpses of potential, though the "Need for Blitzes" figure shows that Memphis was rarely able to generate any sort of pass rush on standard downs.  That, of course, could have something to do with what appears to have been a sieve of a secondary too.

In honor of one of the first bands I ever saw play in Memphis (and possibly my favorite band in the world in 2001), how about a little "Snakes in My Bushes" by North Mississippi Allstars? 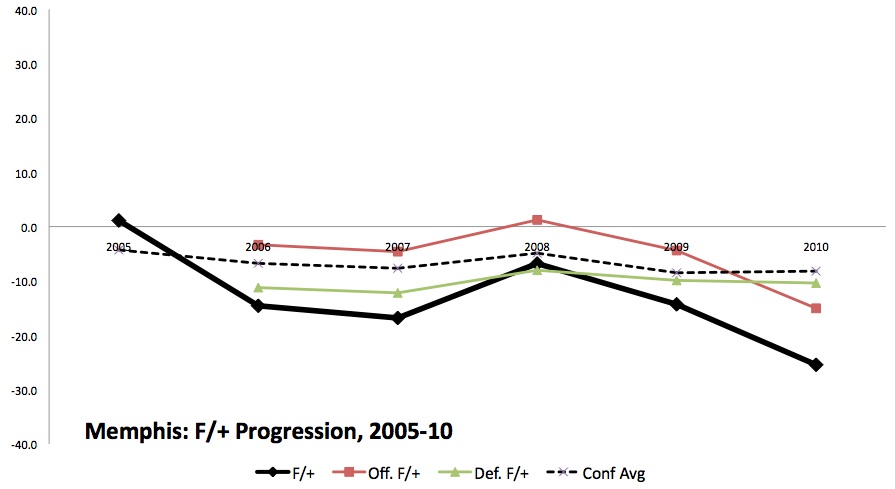 If hope exists for the Memphis Tigers, there are two primary reasons why: First, their five-year recruiting has been much better than their overall performance  Their last two classes have each been ranked fourth in the Conference USA by Rivals.com.  It appears the talent is building, though obviously there are still miles of inexperience through which to wade before any sort of talent upgrade can be realized.

The other primary reason for hope is simply that their YPP Margin was second in the country, miles ahead of most others.  That suggests that, along with being rather poor at football, they were also incredibly unlucky.  There's no guarantee that their overall quality will improve much in 2011, not with what appears to be a second rebuilding effort in as many years in the works, but they should be at least a little bit luckier.  That alone isn't enough to get them back into the Big East discussion, but it's something.

I will now remove my tongue from my cheek and go back to hoping I get to catch Dontari Poe in action on TV sometime this year, and dreaming about the Filthy Diablo...