Summer Vacation: The Arkansas State Red Wolves and the Most Interesting Coach in the World

Share All sharing options for: Summer Vacation: The Arkansas State Red Wolves and the Most Interesting Coach in the World

His name is Freeze.

He spent two years as head coach of the NAIA's Lambuth University, going 20-5 (12-1 in his second year).

He took over as Arkansas State offensive coordinator in 2010, and the Red Wolves' Off. S&P+ ranking immediately improved from 105th to 81st.  When the team went 4-8 anyway and their head coach left, he got the call to become the replacement.

New Arkansas State head coach Hugh Freeze's resume is almost as interesting as the company he has kept ... and with some of the imports he's brought to Jonesboro, it seems the company is going to stay rather interesting.  I get the distinct impression that the Most Interesting (new) (mid-major) Coach in the World is going to either be a colossal success at ASU ... or a colossal failure.  Either Gus Malzahn or Todd Dodge.  Honestly, anything else would be somewhat disappointing. 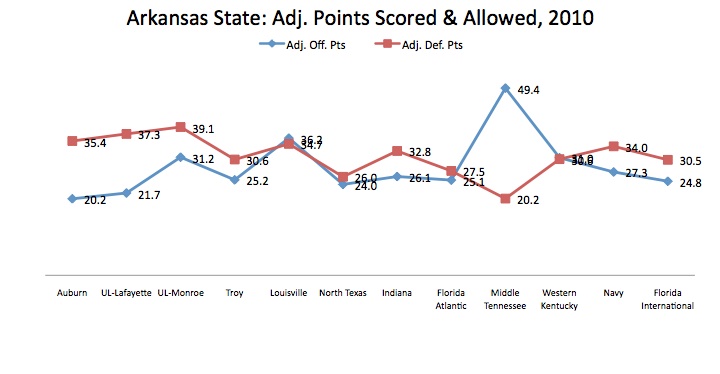 In his eight previous years in Jonesboro, Steve Roberts had put a consistently decent-not-great product on the field, and it was more of the same in 2010 ... but with added "Oh, what could have been" value.  As you'll see below, this was Roberts' best team on paper, due in part to Freeze's offensive tweaks, but the Red Wolves went 1-5 in games decided by a touchdown or less; if they finish just .500 in those games, they end up bowl eligible for the fourth time in seven seasons, and I doubt Roberts ends up resigning.  Alas.  Close doesn't really matter in the black-and-white world of college football, and now we've got Coach Freeze to enjoy.  Hopefully he schedules a Names As Active Verbs Bowl matchup with Minnesota and Jerry Kill soon.

In all, the ASU offense's Adj. Point totals were consistently decent in 2010; after the first two weeks of the season, they "gained" at least 24.0 Adj. Points in the last ten games of the season.  But while the defense trended toward slight improvement, it still held ASU back.  Will that change with an offense-minded coach like Freeze in charge? 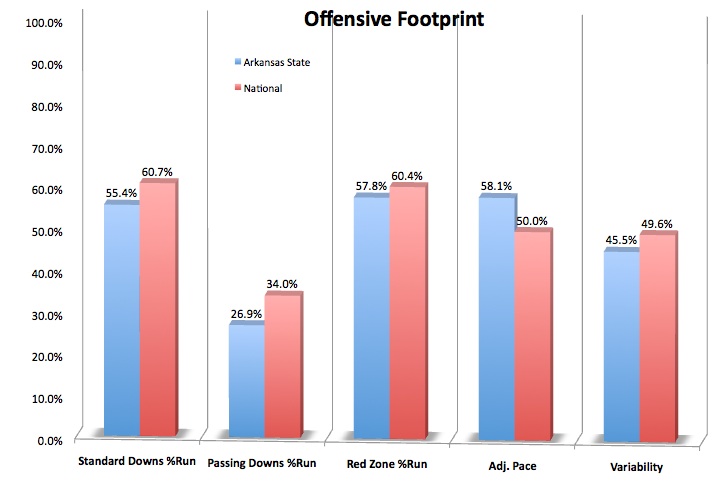 In their first season with Freeze running the offense, Arkansas State showed most of the stereotypical characteristics we've come to expect from the spread.

High pace?  Check.  The Red Wolves ran plays at the 29th-fastest clip in the country.

Semi-low variability?  Check, somewhat.  ASU's variability rating of 45.5% was very much not the lowest in the country, but it was lower than the national average.

Passing downs capabilities?  Check.  Quarterback Ryan Aplin engineered a solid 0.848 raw S&P on standard downs (49th in the country), but he led them to a stronger (in ranking) 0.703 S&P (33rd) on passing downs.  In terms of S&P+ ratings, the difference was even more stark.  ASU ranked 88th in Standard Downs S&P+, 42nd on Passing Downs.

Long games?  CHECK.  Try three and a half hours per contest.  Second-longest in the country.  And that's WITHOUT the burden of televised games and extra-long timeouts.  The Arkansas State official website damn near bragged about this in one of last year's releases.

If one question mark is addressed, the machine should run even more smoothly than it did last year, when the Red Wolves improved considerably.  That question mark: the offensive line.  Of the 12 linemen listed on the two-deep at the end of last season, eight were seniors.  Yikes.  There are some juniors and seniors in the mix this season -- they're not exactly starting four true freshmen alongside sixth-year center Tom Castilaw -- but still ... this is clearly a concern. 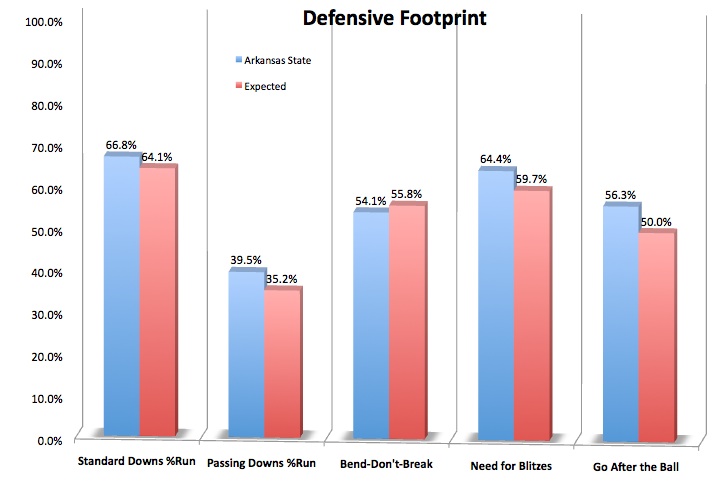 Explain Arkansas State's 2010 defensive performance to me.  How can a team rank 107th in Rushing Success Rate+ and 35th in Passing Success Rate+?  How does the same defense rank 65th in Rushing PPP+ and 101st in Passing PPP+?  94th in Standard Downs PPP+ and 58th in Passing Downs PPP+?  102nd in Adj. Line Yards and 43rd in Adj. Sack Rate?  The run defense bent, bent, bent, and usually broke (except when they didn't -- they were great in the red zone); the pass defense, meanwhile, went for broke.

ASU blitzed reasonably well and got to the passer, but when they didn't, it was trouble.  It could be even more trouble without play-making safety M.D. Jennings (61.0 tackles, 3.0 TFL/sacks, 3 INT, 2 FR, 4 PBU).  Cornerback Darron Edwards (10 PBU) returns, but I honestly can't tell from the stats what made ASU so efficient and incredibly hit-or-miss.

Somehow there is only one song on my iPod with the word "freeze" in it, so it gets the nod.  It is, of course, "Tenth Avenue Freeze Out."  Google Maps tells me there's no 10th Avenue in Jonesboro, but there is a 10th Division Circuit Court.

Combined record of these ten teams: 51-72. Combined bowl bids: two.  Better to be good before you let the team in the redzone, kids. 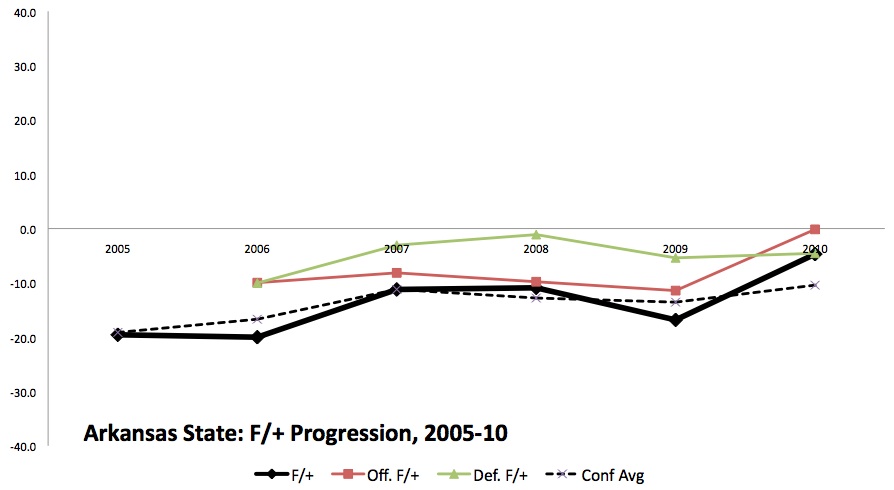 Steve Roberts left Hugh Freeze with quite a few interesting pieces.  Arkansas State has been trending upward for a number of seasons, even if their record did not really shot it.  With skill position players and interesting components of an odd defense returning, Freeze could hit the ground running with a nice first season.  With likely conference favorites Troy and Florida International both coming to Jonesboro (FIU on ESPN2!), the Red Wolves could be a couple of upsets away from a semi-unexpected conference title run.  Or, with another handful of tight losses, they could squander the same type of golden opportunity that they let slip away last season.  One thing is certain: they, like their coach, should be interesting.