Share All sharing options for: The Toolbox: Secondary Point Values

So we've covered that each yard line has a specific point value, and we've covered that an EqPts Per Play (PPP) measure is extremely useful in terms of both evaluation and the tearing apart and piecing together of a given game.  But a "one value per yard line" concept ignores quite a bit of context.  So let's take it down a level. 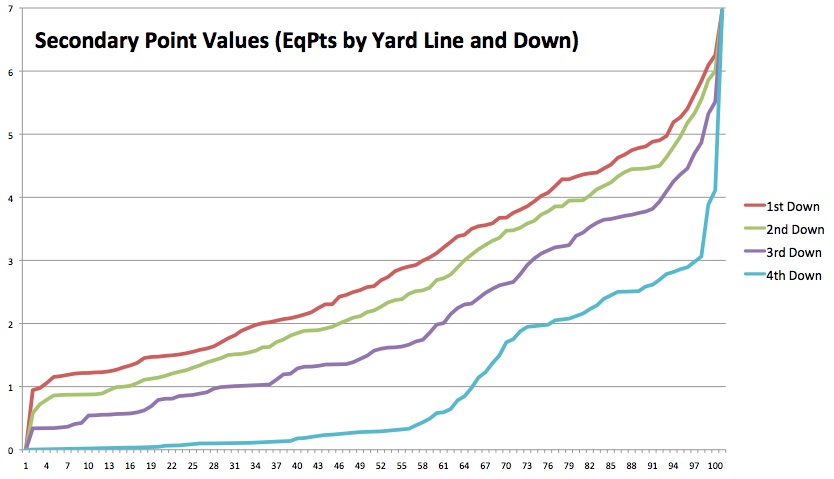 Here's what I said about secondary (or second-level) point values when I first wrote about them at Varsity Numbers:

The concept behind EqPts is a simple one. Each yard line has a point value assigned to it based on the number of points an offense can expect to score in a possession involving a play from that yard line. The 20-yard line is worth 1.179 EqPts. The opposing 20-yard line is worth 3.898. Each play is assigned a point value based on where the play started and where it finished. The slope is different throughout the field. A gain of five yards from your 20 to your 25 is worth 0.064 EqPts. From the opponent's 40 to the opponent's 35: 0.441 EqPts. From the opponent's 10 to the opponent's 5: 0.582 EqPts. The concept of EqPts is intended to give more weight to more important gains.

Second- and third-level EqPts are in essence derivatives of the EqPts concept. Second-level EqPts take two factors into account: yard line and down. First down from your 20 (1.488) has a different point value than third down from your 20 (0.808). Another example: First down from the opponent's 10 is worth 4.881 EqPts, second down is worth 4.477, and third down is worth 3.818. It's not a hard concept to explain; the points you can expect to score go down as the down markers go up.

With second-level EqPts, a play can have a negative value without losing yards. As mentioned in the quote above, second-level EqPts don't tie as closely to actual point values (because of the possibility of negative values, the sum of all second-level EqPt values is only about 82 percent of the sum of first-level EqPts), but looking at second-level Points Per Play (or 2ndPPP) adds a factor of timely play-making to the equation -- because in football, as in comedy and sniper-fire, it's all about timing -- while further subtracting empty gains on second- or third-and-long.

Secondary point values add context where little existed before.  The general EqPts figure correlates more closely to overall quality, and that's why it gets used as part of S&P+ (for a while, I experimented with using a combination of PPP and 2nd PPP, but it just dragged the correlations down), but there is a lot of value here regardless.  If we are to look at a given drive like Run Expectancy looks at a given baseball inning, then this extra context comes in handy.

Yard-per-yard table and an example drive after the jump.

To understand how this can work from a Point Expectancy standpoint, let's see it in action.  Here is TCU's first touchdown drive from the 2011 Rose Bowl:

Of course, there is still a little bit missing.  Third-and-10 is treated the same as third-and-1.  If you want to see some crazy ups and downs in expected points, wait until we start talking about (and trying to draw tables for) the third-level (tertiary) point values that take yard line, down and distance into account.

Tomorrow we'll look at offenses based on 2nd PPP, and the teams whose PPP and 2nd PPP rankings varied the most significantly.