We move on to Team No. 4 of 120.  Time to talk about Sam McGuffie, transfers, tight ends, the 4-2-5 defense, and teams with huge differences between Rushing and Passing S&P+.

Virginia Commonwealth forward Jamie Skeen is the most recent example of what we see often at the mid-major level in basketball -- a player who commits to a major conference squad before eventually transferring to a mid-major and thriving.  Shaka Smart would not be the hottest name in coaching right now if his predecessor, Anthony Grant, had not lured Skeen to Richmond from Wake Forest.

Rice football coach David Bailiff has been hoping to find similar success at the football level; he has taken on a few high-profile transfers in recent years but is still looking to duplicate the out-of-nowhere success he and the Owls found in 2008, when quarterback Chase Clement and receivers James Casey and Jarett Dillard led them to ten wins and a Texas Bowl title.  Running back Sam McGuffie was the highest of the high-profilers, coming in after a year under Rich Rodriguez at Michigan.  He worked out alright in 2010, but neither of Bailiff's major quarterback transfers -- Nick Fanuzzi (Alabama) and Taylor Cook (Miami) -- led Rice back to the promised land of bowl eligibility.  In fact, the Owls have managed just six combined wins since Clement left.

There is hope, however.  Late in the 2010 season, Rice saw youngsters emerge on both sides of the ball, and quite a few of them return for 2011.  Sophomore quarterback Taylor McHargue looked great late, as did running back and Wildcat threat Jeremy Eddington.  There are weapons to work with on offense, but holes still exist, particularly on a defense that was banged up and (stop me if you've heard this one before) gave up far too many big plays in 2010. 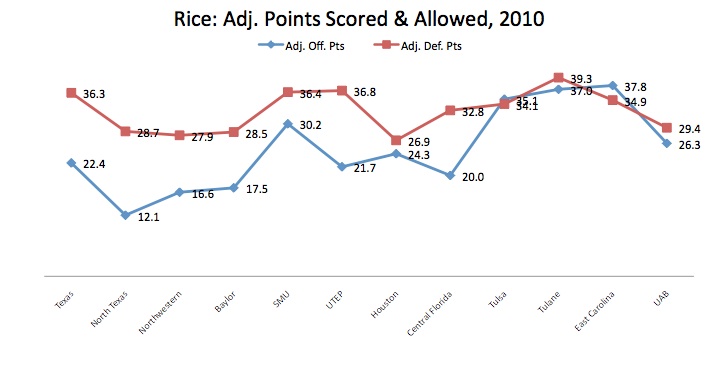 Note the late offensive surge.  Heading into their late-November matchup with East Carolina, Rice was just 4-18 since the Texas Bowl win, but the offense got hot, and they won back-to-back home games to end the season.  Two games is not a hot streak by any means, but for a program looking for hope wherever they can find it, they'll latch on to that.  Rice's 2011 success could be dependent on McHargue finding stability as a sophomore and a new offensive coordinator figuring out how to put Eddington and McGuffie in position to succeed.  Rice is going to have to put up some fireworks to win games. 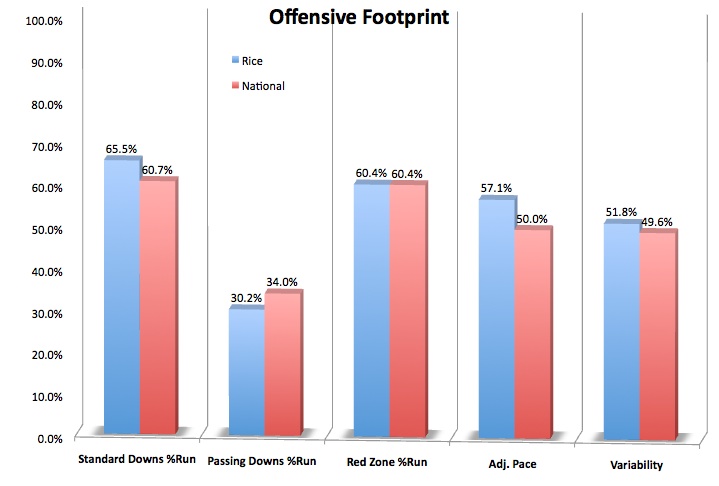 Sam McGuffie came to Michigan with one of the more impressive high school highlight reels you will find.  He was one of Rich Rodriguez's first star recruits, and he showed a decent amount of potential in 2008, rushing for 486 yards (4.1 per carry), catching 19 passes and scoring four touchdown.  But after an up-and-down freshman campaign, he transferred to Rice for what he simply claimed were family reasons.  He sat out Rice's horrid 2009 campaign and was expected to become a star as a sophomore in 2010.  Results were mixed.

McGuffie certainly had his moments -- 178 rushing yards against Tulsa, 197 combined rushing and receiving yards against East Carolina -- but they seemed to come mostly after the emergence of fellow back Eddington.  Until November, McGuffie's year was less than impressive.  He managed just 63 yards on 19 carries against an iffy Houston defense, 56 on 18 carries against UAB, and a horrid 18 yards on 14 carries against North Texas' sieve of a defense.  He still figured out ways to make an impact -- he had four catches for 91 yards against North Texas and caught a team-leading 39 passes for the season -- but it wasn't quite the star turn he probably imagined.

Enter Jeremy Eddington.  The freshman did not get his first carry until the SMU game (a one-yard touchdown), but offensive coordinator David Beaty started to get creative over the last half of the season.  Utilized in the Wildcat formation, Eddington rushed 16 times against UTEP and Houston, then went nuts over the last three games.  Eddington had a combined 40 carries for 312 yards and seven touchdowns against Tulane, East Carolina and UAB.  (Not coincidentally, McGuffie had 241 yards on 48 carries, and seven receptions for 109 yards, in those same three games.)

The dual threat in the running game was complemented even more by Taylor McHargue's return from injury.  McHargue started the second game of the season but injured his shoulder and missed a good portion of the season.  He came back for the final two games and went 24-for-37 passing for 345 yards, four touchdowns, and no interceptions, adding in 155 rushing yards for good measure.

I'm not one for over-reacting to late-season surges (or slumps, for that matter), but in this case, Rice's surge could be relatively legit.  McHargue and Eddington will both be just sophomores in 2011, McGuffie a junior.  To say the least, you can build on that. 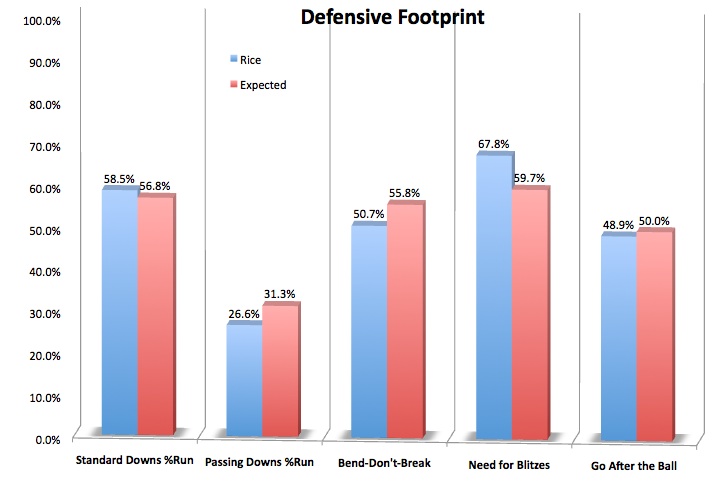 Okay, so the offense is likely going to improve in 2011.  Will it matter if the defense doesn't learn how to stop big plays?

Rice runs a variation of the 4-2-5 defense that TCU and others have ridden to fame.  As TCU has proven, a 4-2 front can do great things if you have the speed to pull it off.  As with a 3-4, you are able to get lighter, faster players on the field, and you can disguise what you are doing.  But to me at least, the 4-2-5 is based more around reaction than any sort of attacking nature.  Run to the football.  Leverage them where you want them to go, then swarm.

If a 4-2-5 is based around reaction and swarming ... Rice neither reacted nor swarmed.  They couldn't get pressure on the quarterback without blitzing (and they really couldn't do it then either), and they couldn't stop big plays to save their life.  Only two teams gave up more more big plays than Rice in the passing game, and it negated the fact that their run defense really wasn't that bad.  It wasn't good enough to stop plays behind the line of scrimmage (Rice managed just 37 tackles for loss last year), but it wasn't terrible.  But that pass defense?  Yuck.

Gary Patterson says your free safety should be your second-leading tackler and should be making plays close to or behind the line of scrimmage.  Well, Rice's free safety, Travis Bradshaw, had almost double the total tackles (105.5) than the second-leading player (54.0) in 2009; I'm going to go out on a limb and say that's bad.  It improved last year ... sort of.  Bradshaw's tackle totals (68.0) fell to second place ... behind fellow safety Corey Frazier.  Combined tackles for loss between the two of them: 2.5.  Still probably not what Patterson had in mind.

How about something by the Manhattan Transfer?  Get it?  I've always been partial to "Boy From New York City," but since there's no New Yorker on the Rice roster, how about we just go with "Birdland" then?  Because an owl is ... a bird.

Here's where I would just like to mention how proud I was of my North Texas' song selection.  That one was great.  This one, not so much.

The 70-spot difference between Rice's Rushing S&P+ ranking and their Passing S&P+ ranking was quite stark.  Using standard averages like rushing/passing yards per game, you can see pretty large differences in rankings simply because ... well, if teams can really run/pass on you, they don't have to do the opposite.  With a schedule-adjusted, per-play number like S&P+, however, such swaths of space between rushing and passing rankings are rare.  How rare?

The good news for Rice?  Six of the nine other teams on this list improved their overall S&P+ rankings the next year; in all, the average change in overall Def. S&P+ rankings for these nine teams was a 10.4-spot rise.  Such a rise would at least get Rice out of the bottom quartile ... which, with their offensive potential, could win them at least a couple more games in 2011 (then again, have you seen their schedule?).  Meanwhile...

...eight of the ten teams on this list regressed the next years; six regressed by at least 27 spots in the rankings!  The average change for these ten teams: a 21.7-spot drop.  Looks to me like we need to be looking at this as a projection factor, eh? 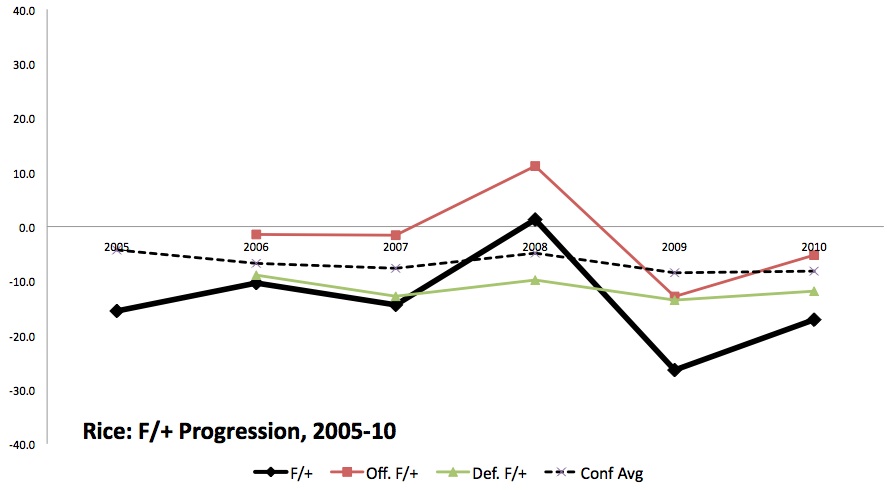 The 2008 season bought David Bailiff a lovely contract extension, but at some point he will certainly have to start producing something again.  With solid returnees and a little more luck, Rice should see decent improvement, especially if the defense ascends back toward the mean as the Stat Nerd Tidbit suggests.  At the very least, even if Rice is still a bad team, their offensive potential should make them a rather enjoyable bad team. I fear that their lack of any sort of stretch-the-field threat, however, will handcuff the new offensive coordinator.

It's pretty easy to tell that this is a team that will likely be projected in the No. 90-110 range when our projections come out; as we will soon see, UTEP made a bowl game with that level of quality last year, but with Rice's 2011 schedule (at Texas, at Baylor, at Southern Miss, at Houston, at Northwestern, at SMU), bowl eligibility is not bloody likely.