UPDATE: I was just reminded that Todd Dodge was fired on October 20, right before UNT's offensive surge. Post updated accordingly.

For team profile No. 3, we stay in the state of Texas. I figure I'll just finish off Texas, then head east from there unless I get a specific request...

It's safe to assume that a large portion of the people reading this blog have gone through something similar: you're playing EA's NCAA Football, and you're getting too good to run a dynasty with a real team, so you decide to bring some small program to glory. For a challenge, you start a dynasty with Western Michigan, or New Mexico, or Rice. I did it with this game in college, and I do it now with my latest obsession. (Crewe Alexandra, your Premier League title is only a year or two away ... we're so close ... please don't fire me now.)

For me, North Texas was always the video game underdog of choice. They have a great name, unique colors, great name, solid recruiting base, and a great name. (And we may have run the Create-a-Player for a 6'11, 400-pound halfback.) And because of all those titles I won them in the late-1990s and early-2000s, I still feel a strange attachment to this program to which I have very little real association (a good friend went there for a while, and that's about it). Add to that the fact that, until a couple of months ago, the North Texas head coach was the mentor of my school's best quarterback ever, and it's safe to say that I was really hoping the Todd Dodge Experiment would work out in Denton.

And now, just in time for a fresh, fancy new stadium, we get to watch how quickly former Iowa State head coach Dan McCarney can turn Dodge's pseudo-spread personnel into something with much more strength and efficiency. 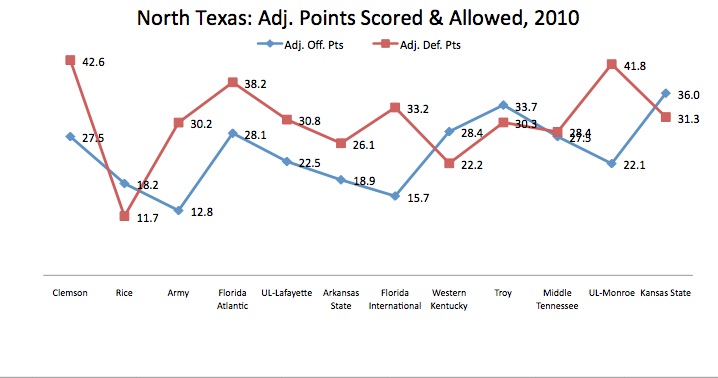 How much leeway do you think Todd Dodge had coming into 2010? Do you think seven points (one against Rice, one against UL-Lafayette, five against Arkansas State) lost him his job? North Texas was, for all intents and purposes, a perfectly average Sun Belt team last fall, but they just couldn't close the deal when they had the opportunity, and to say the least, they didn't start very quickly. Late in October, the Mean Green got running back Lance Dunbar untracked and picked up the pace on offense, but a) it was probably too late to save Dodge by that point, and b) Lance Dunbar can't play defense. 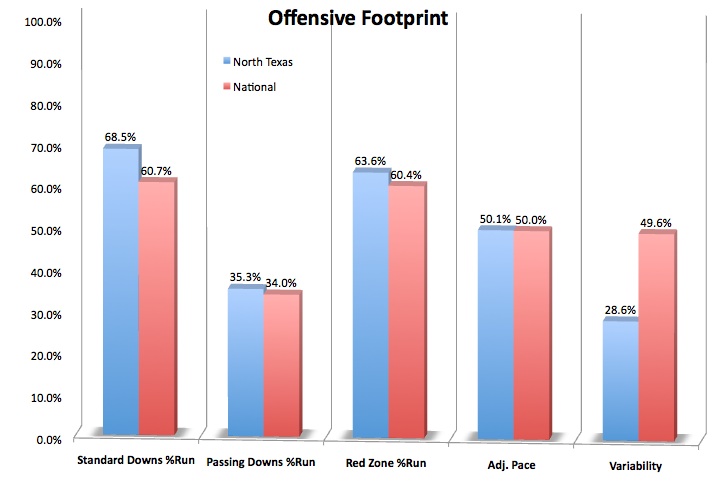 Todd Dodge = spread = pass, pass, pass, right? Not so much. At least, not in 2010. With a powerful, underrated force in Dunbar at the running back position, the Mean Green were almost too conservative and predictable in 2010. They ran when you're supposed to run, passed when you're supposed to pass, ran plays at the typical rate, and rarely varied from the script. Dunbar, 2009's surprise POE leader and one of the most underrated backs in the country, took a long time to get rolling, in part, I'm assuming, because of turmoil at the quarterback position. Starter Nathan Tune dislocated his hip in the season's second game, and the snaps went to QB-turned-WR-turned QB Riley Dodge (Todd's son) and Derek Thompson, both sophomores. Then, Thompson broke his leg, and it was all Riley.

With a shaky passing game, defenses focused on Dunbar, and he rushed for 3.5 yards per carry or worse in four of the first five games after Tune's injury. With one-point losses to both Rice and UL-Lafayette, the Mean Green fell to 1-6 after a drubbing at the hands of Florida International, and Dodge was fired with a somewhat staggering 6-37 career record ("the worst in the history of major team sports at the school").

Upon Dodge's departure, however, North Texas' offense opened up. Riley Dodge became more comfortable behind center, and Dunbar ignited. He gained 941 yards in 128 carries (7.4/carry) over the last five games. North Texas' points per game in the last five: 33.8.

Of course, the late-season improvement didn't keep Riley in the green and white; he transferred after the season. Tune graduated too, so the focus goes to Thompson and a JUCO transfer, Brent Osborn. With Dunbar, the new QB won't need to pass for 300 yards per game -- and with McCarney the coach, he won't -- but competency is needed. 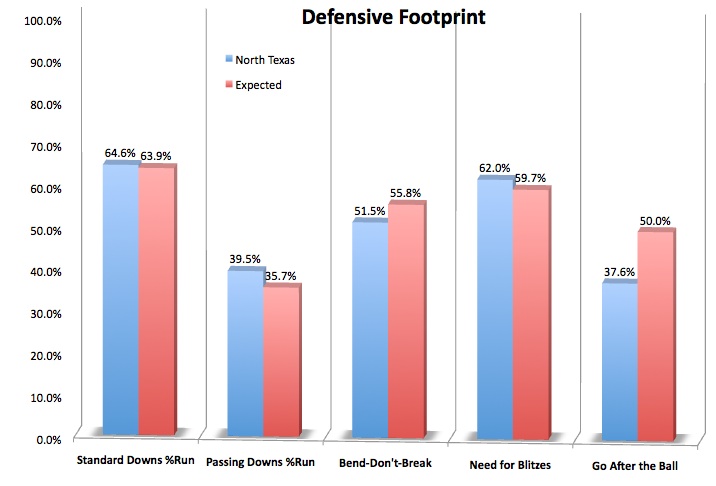 If the best way to measure respect for a defense is to look at opponents' play-calling and aggression, check this out: opponents attempted 118 first-down passes against North Texas, but they were not conservative, sideline-to-sideline passes -- they were downfield stabs. Opponents completed just 54 percent of first-down passes (62-for-114) with five sacks (4.2% sack rate) ... but the 62 completions went for 1,147 yards (18.5 per completion, 10.1 per pass), 11 touchdowns and four interceptions. Knowing they could likely move the ball just fine on 2nd-and-10 if a pass failed, opponents repeatedly went for the dagger downfield. And they connected quite often.

This signaled at North Texas' largest problem. Like a lot of poor mid-major defenses, UNT was reasonably decent in terms of efficiency -- after all, almost half the time that opponents passed on first down, the result was a second-and-double-digits situation -- but they were absolutely horrendous when it came to preventing big plays. Thirty-four first-down passes went for double-digit yardage, as did 39 first-down rushes. The defensive line was relatively abhorrent, and everything flowed from that.

To that end, does it really matter that the Mean Green only return six starters, few of which made much of a statistical impact in 2010? Does it matter that they lose both starters at defensive tackle ... when the line was basically a sieve anyway? Their 2011 performance will be based on how quickly McCarney and incoming defensive coordinator Clint Bowen, who previously served four years as Mark Mangino's D.C. at Kansas, can tweak UNT's scheme, conditioning, skill, mentality, etc.

"If We Make It Through December," by Merle Haggard. Todd Dodge did not. 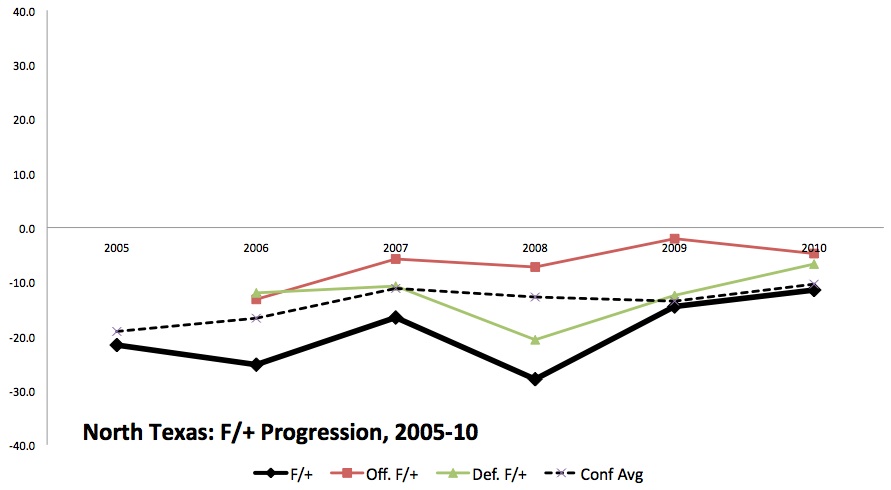 The YPP Margin suggests that UNT was a bit unlucky -- again, their F/+ from last season reflects a perfectly average Sun Belt team, only with a record (winless at home!) that suggests something far below average. The level of talent here doesn't necessarily reflect what you would think for a team based in, well, north Texas, but McCarney was probably a good hire. There is very little predictability when it comes to the background of incoming coaches, but hiring coaches with a modicum of success at the BCS level is as safe a bet as you can make. With a new stadium and a back capable of going for 2,000 yards (okay, 1,700), the Mean Green should make for an interesting team this coming fall ... if not a particularly good one. If only there were a 6'11, 400-pound fullback lying around somewhere...