NOTE: Consider this Team Profile No. 2 of 120.  As mentioned the other day, we will be perusing the mid-majors for the next couple of months before doubling up on major conference teams at the SBN mothership.  Confused? Don't miss the definitions and footnotes at the bottom.

In the world of college football, you don't get many mulligans.  But I think it's safe to say Houston head coach Kevin Sumlin gets one for the 2010 season.  After two years of thrilling success with offensive coordinator Dana Holgorsen calling plays for quarterback Case Keenum, Sumlin had to figure out life without both Holgorsen (hired away by Oklahoma State) and, less than three games into the season, Keenum (lost to injury against UCLA).  Later in the same game, second-stringer Cotton Turner was also lost to injury.  With true freshmen at the helm the rest of the way, the offense predictably took a solid step backwards in 2010, and the Cougars stumbled to a 5-7 record, easily their worst of Sumlin's three at the commuter school.

Signs point to recovery.  First, Sumlin's got quite the offensive resume himself (that's "offensive" as in scoring points, not "offensive" as in Fergie singing "Sweet Child O' Mine"), with coordinator-level experience at both Texas A&M and Oklahoma.  He will probably figure things out with more experience at the quarterback position.  Plus, he gets Keenum back for a sixth year of eligibility in 2011.  Soon enough, we should be getting back to noticing how poor Houston's defense is instead of focusing on their lack of video game numbers on the offensive side of the ball.

After two good-as-expected games to start the season, Houston became both devastatingly and predictably inconsistent without Keenum and Turner.  The offense slowly improved through October, but a) they faded a bit in November, and b) the offense wasn't good enough to mask some serious defensive deficiencies for which Sumlin should probably not get a mulligan.  It's easy to assume the offense will be back where they are supposed to be in 2011, but finding evidence for hope on the defensive side of the ball is more difficult. 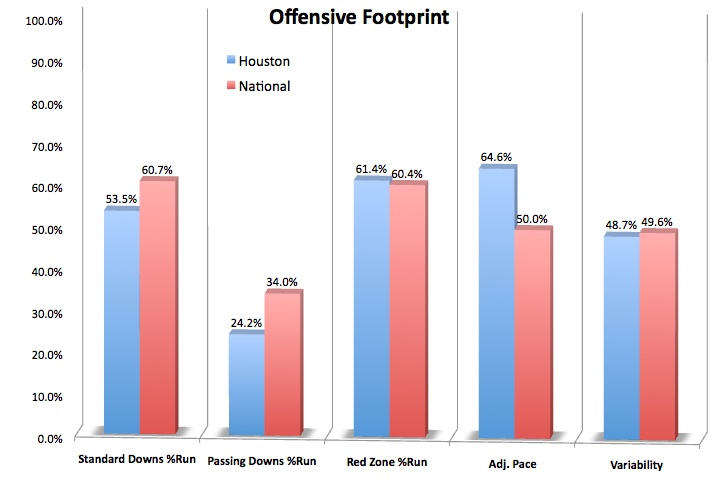 When Keenum and Turner went down, newcomer Terrance Broadway (71% completion rate, 10.1 yards/pass, 3 touchdowns, one interception) got the first crack at the starting job.  But a propensity for sacks and fumbles led to his demotion (I guess that's what caused it, anyway -- his actual passing numbers were stellar).  Fellow newcomer David Piland (58% completion rate, 7.7 yards/pass, 24 touchdowns, 14 interceptions) started the final eight games, and Broadway gave UL-Lafayette coaches a Christmas present by transferring to ULL early in bowl season.

As would be expected with newbies at the helm, Houston had quite a few issues in the efficiency department.  The Cougars' success rates fell from fourth overall in 2009 to 47th in 2010; they fell from 10th to 36th in rushing success rates, fifth to 57th in passing, 11th to 64th on standard downs and third to 19th on passing downs. 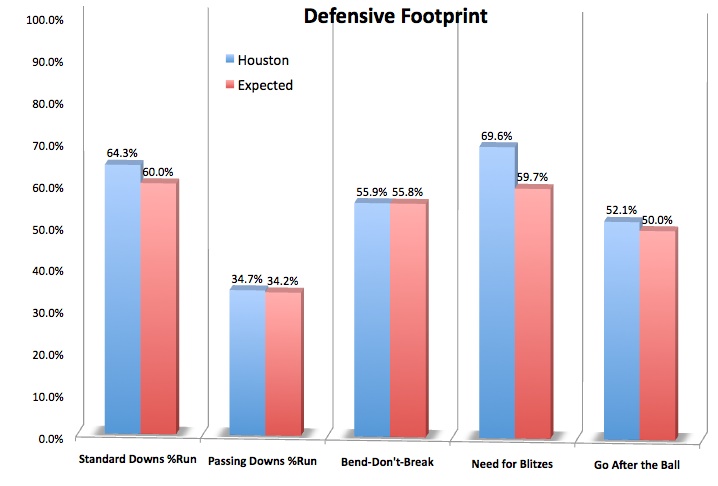 Sunshine and moonbeams on offense?  Sure.  But until there is reason to believe otherwise, we're still looking at hailstorms and haunted houses on defense.  Perhaps following SMU's lead, Houston moved to a 3-4 defense last year -- Brian Stewart was hired as defensive coordinator after spending eight years as a defensive coach (including defensive coordinator of the Cowboys) in the NFL -- and as is sometimes the case with a system change, the results were not immediately intriguing.  Stewart has a potentially strong resume, and the future may be bright as far as we know, but the Cougs gave up far too many big plays to be effective in 2010.  They attacked alright (you see that their sack rates were higher than their overall pass defense numbers), but if they didn't make a big play against you, you were.  They had the worst (worst! As in, 120th!) passing downs success rate in the country, meaning any sort of relative success they found on standard downs wasn't going to make a huge difference on the scoreboard.  They were just going to give up all the gains shortly.

There are several reasons for adopting a 3-4 alignment, and it certainly seems as if quite a few college teams are moving in this direction, but it doesn't necessarily matter if you either don't have the right personnel, or you don't have the personnel, period.  Switching from a 4-3 sometimes brings a bit of awkwardness and lack of fit, and at the very least, it resulted in stagnation for Houston in 2010.

Are things looking brighter for their second year with Stewart and the three-man front?  Possibly.  The linebacking corps is particularly interesting -- LB/hybrid Sammy Brown a big-time play-maker (20.0 TFL/sacks, 2 forced fumbles) in 2010, while Marcus McGraw and Phillip Steward (a combined 145.0 tackles, 16.0 TFL/sacks, and three interceptions) also return.  They should be able to get creative with their attacking.

Why, Kurtis Blow's "The Breaks," of course.  Clearly Kevin Sumlin's woman stepped out with another man, and she ran off with him to Japan, and the IRS said they wanted to chat, and he couldn't explain why he claimed his cat.  These. Are. The Breaks!

Between the watching (and repeat watching) of Pony Excess and the crazy EXPANSIONAPALOOZA 2010™ talk from the summer, I've caught myself wondering at random times what would have happened had the Southwest Conference somehow survived.  Ignoring the domino effect aspect (What would have happened to the Big 8? What would this have done for future versions of the WAC, Mountain West and Conference USA? How in the hell would EXPANSIONAPALOOZA 2010™ worked? This sounds like a series of posts all of their own.), it's interesting to envision the eight or nine SWC teams against each other now, since they resided in three different conferences.  But here are the final eight SWC teams ranked according to their 2010 F/+ ratings:

With Texas plummeting, we'd have basically had a two-tiered race in 2010.  TCU and A&M would have faced off, with TCU likely taking home the prize, but third place might have gone to any of four to five teams.  SMU would have had a lovely shot at third or, technically, second with an upset.  The Keenum injury, theoretically, would have ruined an opportunity for the Cougars to move up into the conference's upper tier for at least a season.

What about a certain former SWC team to the east?  Arkansas finished seventh in F/+, meaning we could have seen a tremendous TCU-Arkansas battle for the title.  If TCU won, their increased strength of schedule might have bumped them past Oregon for the BCS title game.  Then again, we know how the Butterfly Effect works.  With an SWC conference still in existence, then Chip Kelly is a high school coach in New Hampshire, Gary Patterson is an insurance salesman Topeka, and Bobby Petrino is selling used cars.  Or something like that.  It's probably best not to think too hard about this.

Also: no word where 1920 member Phillips University (from beautiful Enid, OK) would have finished had they not a) dropped out of the conference after one season when they didn't score a single point in conference play, or b) dropped football altogether in 1933.  That's one Butterfly Effect I am not up for envisioning. 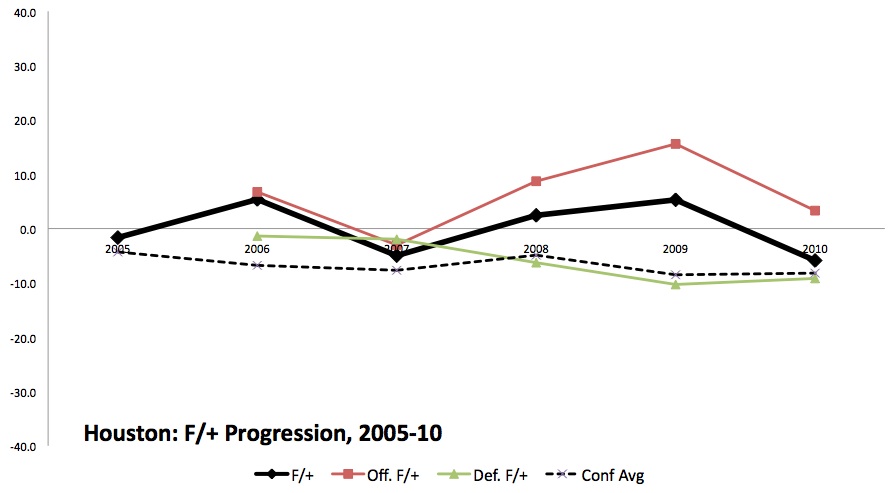 Houston is a program that has seen mid-level recruiting and performance in recent seasons.  In Conference USA, that's fine.  But with their early-2009 success, they appeared to be a candidate for more than just "good mid-major team."  It's easy to assume the offense will bounce back, and to some degree they probably will.  Plus, the turnover margin is likely to improve considering freshman quarterbacks are turnover-prone (that likely won't be a problem in '11) and they attacked reasonably well in 2010, forcing 18 fumbles and picking off 13 passes in 2010.

There is a decent level of experience -- and Case Keenum -- returning (again, the offensive line and secondary are the keys).  But whether or not we are supposed to take Houston seriously as a candidate for either moving to a major conference (TCU needs a primary Big East rival, right?) or simply a candidate for taking the Mid-Major Leap, will be determined by defensive improvement.  Houston plays exciting football -- no single game made me long for the SWC more than the '09 Houston-Texas Tech game (Can you imagine a regular 9pm SWC game? Houston-Tech, Houston-Baylor, SMU-Tech, A&M-TCU, etc., to finish off your Saturday of football?) -- but the defense holds the key to shifting from "exciting" to "really good."