Share All sharing options for: The Toolbox: Offensive PPP

First, we start with the official EqPts definition at Football Outsiders:

Here's what I said about the EqPts concept in my very first Varsity Numbers column at Football Outsiders way, way back in aught-eight:

I enjoyed having Jerome "2 carries, 3 yards, 2 TDs" Bettis on my fantasy team that last year of his career, but let's be honest: Just about anybody could have come in and plunged in from the 1. Getting the ball to the 1 was the much bigger accomplishment, no? In this way, touchdowns are basically the Runs Batted In of football -- get enough of them, and it's damn impressive, but you need quite a bit of help racking up a big number.

Case in point: November 10, College Park, Maryland. Tight end Jason Goode catches two touchdown passes (of ten and seven yards) from Chris Turner as Maryland upsets No. 8 Boston College, 42-35. Good for Mr. Goode. However, what contributed more to Maryland's touchdowns -- Goode's two receptions or the 43-yard catch by Darrius Hayward that set up the first score and the 45-yard catch by Isaiah Williams that set up the second? What if we could apply a point value to all four catches?

So that was the goal. I determined the points scored on every possession of every game and assigned those points to each play of the possession. From there I was able to assign a 'point value' to every yard line based on the average number of points you could expect to score from there. And with that I was able to assign an Equivalent Point Value (EqPt) to every play.

The EqPts concept is perhaps best described by the following graph: 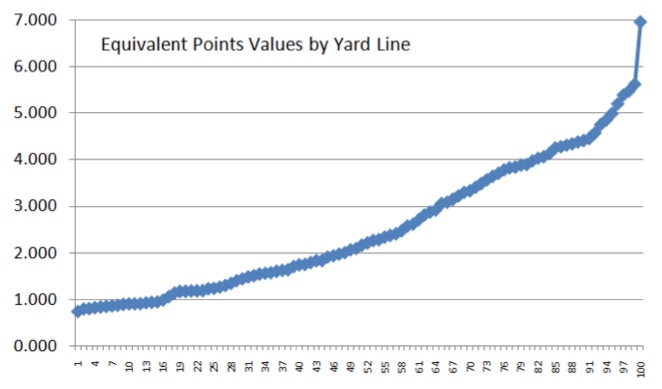 This shows you, basically, the point value of every yard line on the college football field.  Note the different slopes.  A five-yard gain from your own one is worth fewer EqPts than a five-yard gain at the opponent's 30.  And since you still aren't guaranteed points until the ball crosses the end zone, a touchdown is still worth much more than anything else (6.96 points, to be exact, since college kickers can be expected to make 96.3% of their PATs).

So on average, every time these teams ran a play under "close" circumstances, they lost ground.  It's hard to win like that.  And I almost hate to bring it up, but ... that 2009 Washington State team really was among the worst major conference teams of all-time.  What you thought was reasonable improvement from Wazzu in 2010 was actually rather significant improvement.

PPP is a pure measure of explosiveness and, indirectly, athleticism.  Teams with less athleticism than their opponents can outfox them into higher success rates ... but you really cannot fake explosiveness.  You either have it or you don't.  The teams on the above list bludgeoned their opponents with athleticism and big plays.  (And I think there's a pretty good reason why some of the same teams that are on the "Smallest" list were also victimized on the "Largest" list.)

I put the 2008 Missouri-Nevada game on there, simply because I cannot imagine 30 offensive performances better than it.  It was probably the most dominant offensive game I've witnessed in person.  Ten yards per play.  Touchdowns of 80, 59, 49, 32 and 27 yards. Chase Daniel, Jeremy Maclin, Derrick Washington (sigh), Chase Coffman, etc., were all at the top of their games.  It was so bad that my best friend and I turned to each other in the second quarter and said "It's never going to get better than this, is it?"  For that Missouri team, we were right -- it didn't.

At some point, I really need to dive into Notre Dame's 2007 collapse.  It was so, so stark.

So that 2006 Hawaii squad ended up at or near the top of the list of best 2005-10 success rates and PPP.  Proof that your best team doesn't always go the furthest.  The 2007 Hawaii team got the BCS bid thanks to a much easier schedule and close wins, but the 2006 team was better, especially on offense.

So there's your background.  Now here are your 2010 rankings.  Once again, teams are ranked in order of schedule-adjusted PPP; we will discuss the schedule-adjustment soon enough.

I'd have been quite interested to see what Rich Rodriguez would have done in Ann Arbor in 2011 -- albeit with a different defensive coordinator. The Wolverines had a really, really strong offense in 2010, even though Denard Robinson predictably couldn't keep up his hilarious early pace.