Share All sharing options for: The Offensive Footprint, Part II (Pace and Variability)

Last week, I introduced the topic of the Offensive Footprint as follows:

College football is my first love, but college basketball is in solid second place.  During the past four months, I've referenced Ken Pomeroy's team profile pages approximately 13,693 times at Rock M, and I would love to work toward the same concept for football teams.  Figuring out the stats part is easy enough -- you can probably figure out which stats I would be inclined to include.  But it's the Style Components aspect of Pomeroy's pages that intrigues me.

So the question for today is simple: what "Style Components" would be most interesting to follow in college football?  (More specifically: what style components could be derived from play-by-play data?  Obviously we could include something like "Offensive Style: Spread," but that's both open to interpretation and not part of a play-by-play line.)

I introduced a table with three run-pass ratio categories (standard downs, passing downs, red zone) and asked for further feedback.  Based on that feedback, I want to introduce two more categories to the footprint.

I discussed this in detail in a Varsity Numbers column last November -- both how to best determine pace and whether it impacts your performance -- and really, I felt a bit silly for not thinking to include it here all along.  From VN:

In my ongoing Oregon obsession and my successful quest to overthink why the Ducks rank lower in the S&P+ ratings than in any other computer system, I decided to look into the role pace might play, positive or negative, in the development of the S&P+ rankings. Since this is a play-by-play system, the number of plays you run in a given game is of no importance. This has helped slower-paced teams like Virginia Tech in the past, and that is by design. The idea of stepping away from the go-to, commonly accepted, per-game stats is to put everybody on even footing no matter what style they might be running. If Team A runs 15 more plays per game than Team B, they are likely going to end up with more yards, whether or not they are truly more technically proficient.

But at the same time, is there a fatigue factor with higher-paced teams? Do they wear down opposing defenses, thereby causing a defined competitive advantage that should be taken into account?

Below is a breakdown of the "fastest" teams in college football. We start with the basic plays-per-game measure, but since teams that pass more are naturally going to end up running more plays (more clock stoppages), it was best to factor in each team's run-pass ratio. A simple regression formula was used to determine how many plays a team would be expected to run given their run-pass splits. The teams were then ranked according to the difference between their actual plays and their expected plays.

Before I go any further, let's just take a look at an example of these terms in action.  Here is Oregon's Offensive Footprint for 2010: 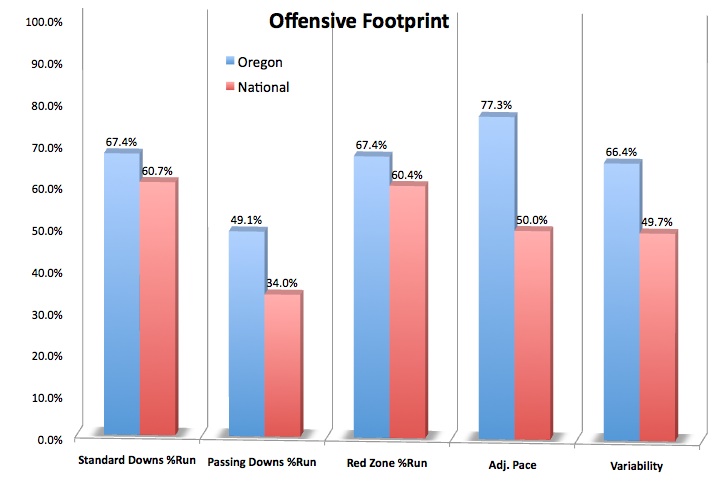 (To fit them on the same line as the run-pass ratios, I turned Adj. Pace and Variability into a percentage figure with the national average hovering right around 50.0%)

With just the three categories of run-pass ratios, we learned a decent amount, namely that they crafted their identity with the run, and they rarely strayed from that.  However, the new categories tell us quite a bit too.  First, they were as fast on paper as they were on television screens.  Plus, they did still vary from the expected script a decent amount.  They actually ran the ball less than the national average once they trod into opposing territory, while they were predominantly a run-first, run-second team in their own territory.  The first three categories tell us how much they liked to run; the last one tells us that they didn't always prefer running.

One interesting side effect of this data, though, is that the most run-heavy teams in the country had some of the highest variability.  Why is that?  Because while teams like Army (second-highest variability), Georgia Tech (third) and Air Force (sixth) ran between 30% and 40% more than average on standard downs ... they ran up to 70-90% more than average on passing downs.  Their oscillation between run-heavy and really run-heavy skewed their numbers a bit.  If nothing else, this shows that the Variability concept might not quite be fully-formed yet.

To illustrate this, let's look at Georgia Tech's Offensive Footprint as well: 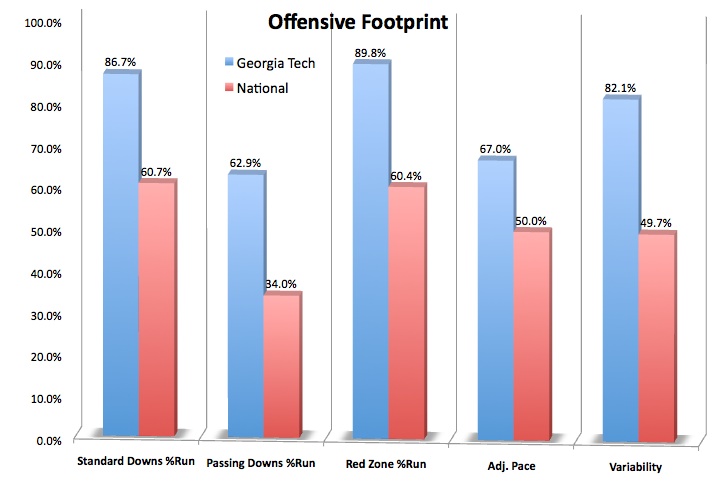