One of the reasons I was hoping to start an SBN football nerd blog was simple: I love SBN's community-building format, and there are so many concepts I would love to discuss with a solid SBN community.  One of the concepts I'm still trying to figure out is one of The Footprint.

College football is my first love, but college basketball is in solid second place.  During the past four months, I've referenced Ken Pomeroy's team profile pages approximately 13,693 times at Rock M, and I would love to work toward the same concept for football teams.  Figuring out the stats part is easy enough -- you can probably figure out which stats I would be inclined to include.  But it's the Style Components aspect of Pomeroy's pages that intrigues me.

So the question for today is simple: what "Style Components" would be most interesting to follow in college football?  (More specifically: what style components could be derived from play-by-play data?  Obviously we could include something like "Offensive Style: Spread," but that's both open to interpretation and not part of a play-by-play line.) 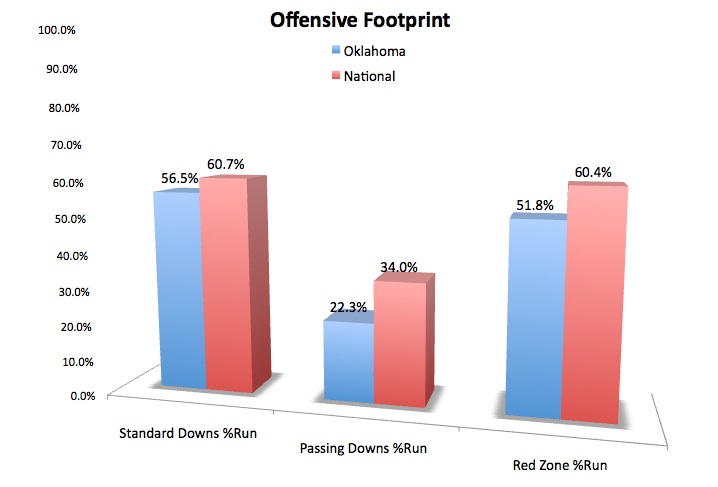 With this information alone, we can learn a bit.  For instance, Oklahoma was your typical run-pass offense in standard downs (i.e. first downs, 2nd-and-6 or less, 3rd-and-4 or less) situations.  But when they fell into passing downs, the general strategy was "Go make a play, Landry."  They did not protect him in any way by running a lot of draws (actually, that might be another good Footprint category: QB Trust, a ratio of standard and passing downs pass rates).  Consequently, a disproportionate number of Jones' passes came in situations where the opponent was playing pass ... and he still completed 66 percent of his passes with a better than 3-to-1 TD-INT ratio.  That says a lot about what his stat line might do if the running game improves (it was really only solid in 2010, far from spectacular) and he's throwing more passes in more advantageous downs-and-distances.

Obviously offense is a bit more straight-forward than defense -- I'm somewhat at a loss when it comes to defense, but that's a conversation for another day (more specifically: tomorrow).  But ... what other style factors would be interested to follow in this regard?